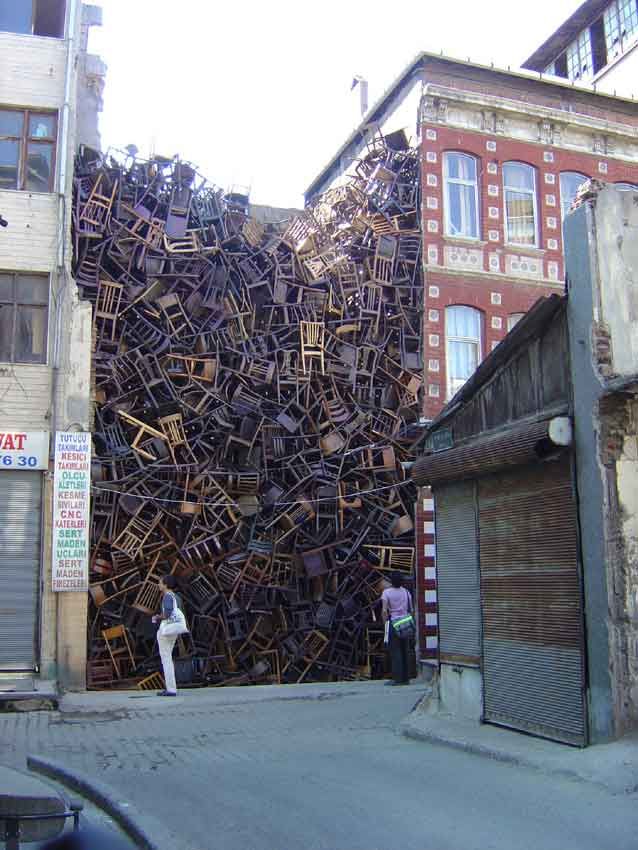 DesignSponge posted an interesting work of art by Doris Salcedo. The comments on this post are rather funny, because there are many people upset over this artwork for varying reasons. One person thinks it’s “a waste of space.” Another one thinks the artist “could have voiced her opinion in a more constructive way.” Someone else responded with, “take the time to read a bit about her haunting work before making further uninformed comments.”

Personally, I think all these people are off base. So here’s my thoughts about this work and their comments (also left as a comment on DesignSponge’s post):

This is a great work of art. In response to the comments left earlier, great art should evoke something in the viewer or coummunicate something. I’m not a fan of artwork that requires you read something to get something out of the art. Great art should be able to communicate on its own.

Now it’s alright for captions or something that enhances your understanding of art, because the end goal is enlightening the viewer. But if the art requires a caption, then IMHO the artwork by itself isn’t as strong.

With this particular artwork, it’s captivating for many reasons (and I didn’t read what the artist said). It’s up the viewer to determine those reasons. And this artwork is really full of potential. For instance, here’s what I see.

1) Chairs are meant to be occupied by humans

To see these chairs so compacted against one another takes away the space normally occupied by humans. And the chairs are fit in between two buildings, occupying the space normally taken up by architecture. Or one could even argue (as in a previous comment) that these chairs are taking up the space of where humans could be. So there’s a reversal of roles here. The chairs which normally hold humans, are now filling a space that humans normally occupy. So within this interpretation, there’s the meanings of occupying a space, and the meaning of volume.

2) Then there’s the interpretation of color

When you mix together yellow and purple pigments, the result is brown. Even though the colors used here are primarily purple, I still get a feeling of brown. Perhaps it’s the context, but there’s something very brown about this.

3) Then there’s the analysis using feelings

This piece makes you feel overwhelmed and afraid.

It can make one wonder how all these chairs are fitting together. How this was accomplished.

See, my point being that this artwork evokes many different ideas and interpretations. It is simply a great work of art.

5) You can look at this piece as a whole

It seem like that together these chairs form a sort of monster or living creature, like either chairs themselves are alive or there is some sort of life inside this mass of chairs.

The idea that these chairs can form one mass living organism then touches on aspects of community and how all individuals fit together into one society.

One could just take a funny approach in thinking about this piece in that it’s simply a roadblock. It’s like when you are in a room and you don’t want anyone to come in, so you prop up a chair against the door. Well, perhaps someone went overboard and just piled up a bunch of chairs so nobody could get inside their store.

Or from an art historical interpretation, maybe it’s a homage to Louise Nevelson.

What does this installation mean to you?

It goes to show that often the most simple ideas can lead to most dramatic results. The notion of architecture and man’s role in that environment is clear. That’s an excellent study and worthy of contemplation. However, I find myself looking at it from the opposite end. It’s an interesting study in voids. What open space means and what open space does. This collection of chairs is stuffed into this space as a whole. It fills the void left between the building on the left and the building on the right. However, there’s space between the chairs. For humans, this space is inhabitable. But smaller creatures like spiders and mice would have a field day here. It’s a complex network. The contrasting use of voids is what really makes this piece work. As far as the folks who left negative comments; I think whatever interpretation people bring to this piece reflects their outlook on life.

That’s funny (and very true) that the interpretation that someone gives is actually an interpretation on themself! As you said moose, “But smaller creatures like spiders and mice would have a field day here.” It’s like a super huge jungle gym for mice.

one of my college roomies had a couple of “controversial” art pieces back in college. One which I really enjoyed was a wall totally covered in those free AOL Floppies they used to send out. The other one was a wall of broken down cardboard boxes stapled to it. Even professors were perplexed. I didn’t like it, but it did what art is supposed to do: elicit a reaction

Moi, which one of banksy’s works?

I think people tend to over analyse art, which to my mind takes away from the enjoyment. In this case, isn’t it enough to see a huge space filled with chairs (where there ought to be a building) and enjoy the “WTF?!” moment? Seriously.. enjoy the quirky, the unusual, the unexplained and unexpected for what it is. Nobody tries to find a meaning behind fireworks, beyond the fact that they’re pretty… more of us should approach art in exactly the same way.