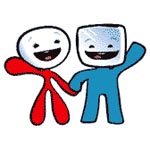 From the olympic site:

“Neve”: she is a gentle, kind and elegant snowball; “Gliz”: he is a lively, playful ice cube. They are the two symbolic characters of the XX Olympic Winter Games. They complement each other and personify the very essence of winter sports.

The mascots were born from the pencil of Pedro Albuquerque, a 38-year old Portuguese designer who won the international competition launched by the Organising Committee for the Olympic Games in Turin (TOROC) on 25 March 2003. He was inspired by his passion for water and the incredible shapes this element takes on when it is transformed into snow or ice; by his research into the Italian spirit and the places hosting the Olympic Games; by the Olympic values; and by the technical characteristics of the various sporting disciplines of the Games.

“Neve” and “Gliz” reflect the spirit of the Italian Olympic event: passion, enthusiasm, culture, elegance, and love of the environment and of sport. They are the symbol of a young generation that is full of life and energy.

Instead, I suggest something more Italian. The Meatball. And the roundness of the meatball goes well with the five rings in the olympic logo. Just 85 days until the Winter Olympics! Get your meatballs ready!

tom, what are some really traditional Italian food items? i don’t know if the meatball is something that personifies Italy. i’ve never been to Italy myself, but i know people who have, and the food there is kind of different from what we Americans imagine it to be. maybe a plum tomato? maybe a ring of calamari? maybe a head of garlic? something else circular?

i don’t like these characters. they have no personality. they are boring. they don’t seem purposeful or symbolic enough.

How about a wheel of Parmigiano Reggiano cheese!

This Pedro Albuquerque must give really good presentations. It looks like Pedro presented doodles on a cocktail napkin and the Italians told him to do nothing else. Though I’m glad to see that Pedro spent the extra time to actually color in their bodies with red and blue. What extra effort that must have been. I bet others who spent alot of time developing characters for this Winter Olympics mascot competition are really ticked off.

Oh a wheel of cheese! brilliant, tom! Marshmellows! Neve and Gliz get skewered many times on this phtoshop challenge: http://forums.fark.com/cgi/fark/comments.pl?IDLink=1168608 Here’s the backstory on how they were selected: http://www.thespoof.com/news/spoof.cfm?headline=s6i6705 But actually, i think these were not done by some 38-year-old, it was done by one of the board executives kids. And they are red white and blue, because AMERICA ROCKS!

I didn’t think a 38-year old man would do this. This must work for the little kids back home, but for the Winter Games? These mascots would be appropriate models for the souvenir stuffed toys from the organizers, but as the real mascots? I think I’d like to challenge the contest organizers to a snowball fight.

Compared to some of the other grotesque horrors in the pantheon of Olympic mascots, the blandness of this pair comes as something of a relief.

This must be a joke?