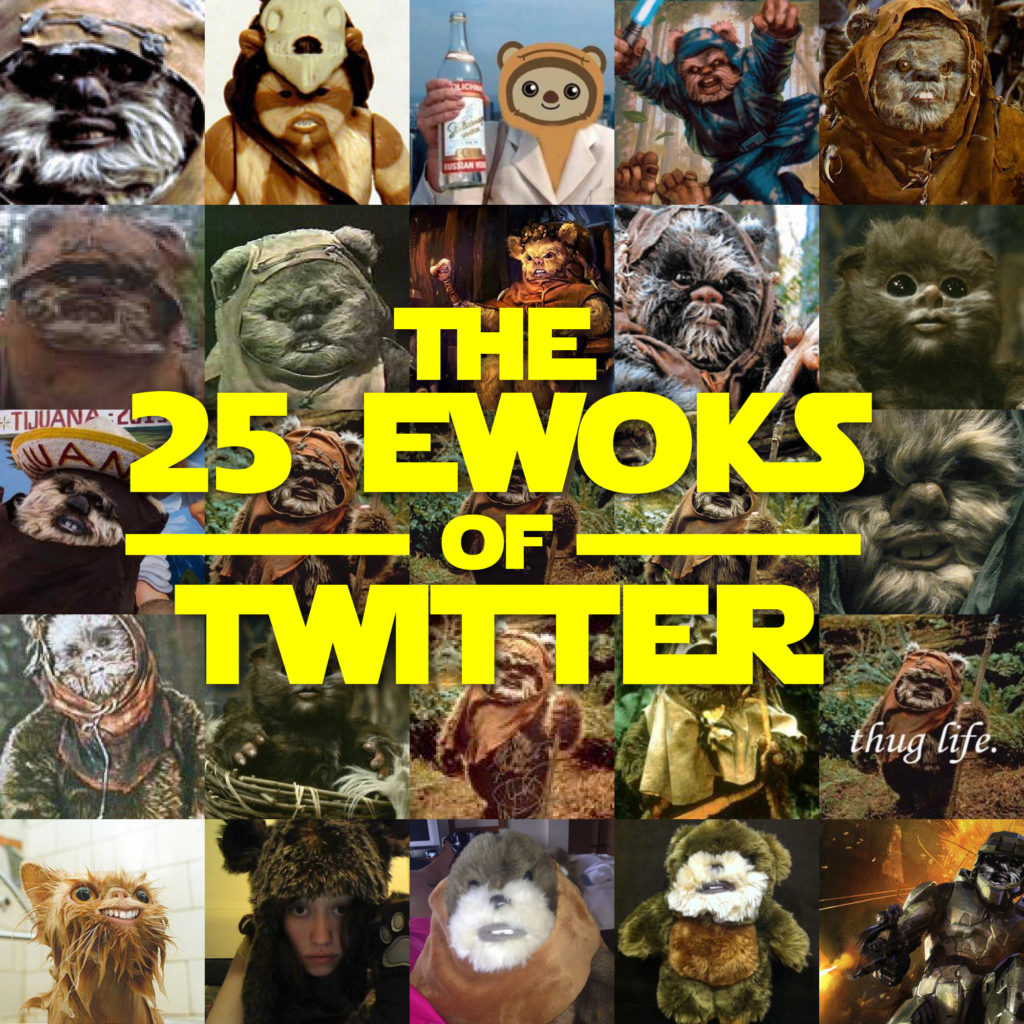 25 Ewoks roam the forests of Twitter. They range from the cute and adorable to the heavily ironic and twisted. Which Ewoks should you be following on Twitter? Let’s go through the Ewok village to uncover the best Ewoks on Twitter.

The best Ewok should have the most followers, right? However, the two most popular Ewoks, @Paploo and @MasterLogray, tweet only in Ewokese. Here’s what that looks like:

Um. Ok. That’s funny for the first couple times. Repeatedly tweeting in a language no human understands gets quite old after a while.

To determine the best Ewok on Twitter, let’s look at the top ten Ewoks with the most followers.

@EwokBJs has the third largest following. His tweets can be very clever, but the tweets are often very dirty.

Moving down the list to #4, @WicketTheEwok has tweeted once since 2010. 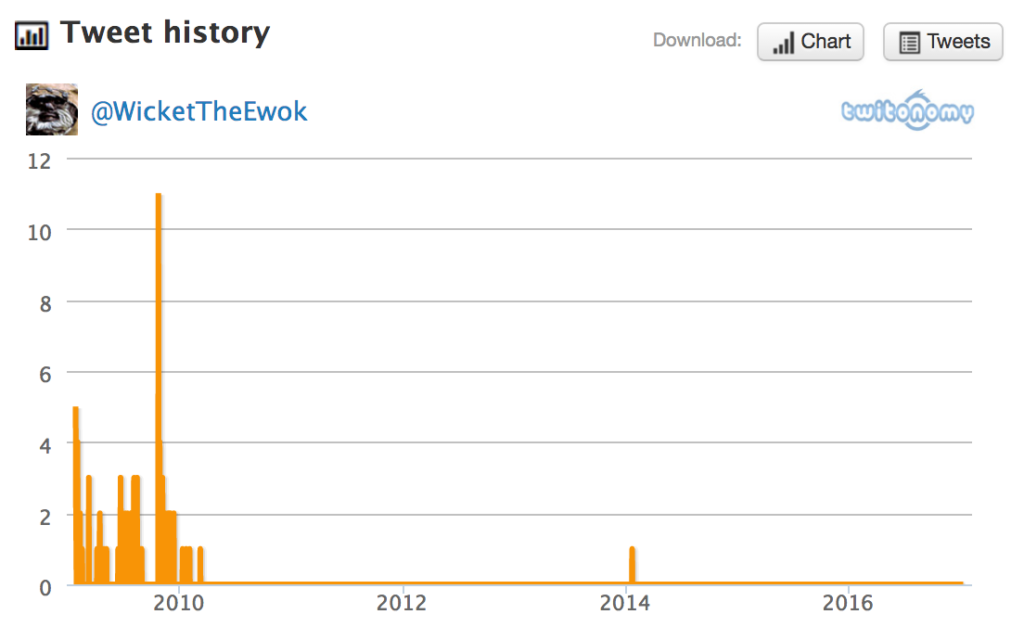 To be the best Ewok on Twitter, you need to be actively tweeting at least in the past year. Most Ewoks on Twitter joined around 2011 to 2012, and then stopped tweeting. The best Ewok would have a deep archive of tweets, consistent through the years. haven’t tweeted in years.

Eliminating the dormant accounts (#6 @WicketFTW, #8 @ThirdEwok, and #10 @DeejWarrick) and dirty Ewok accounts (#5 @Fred_Ewok and #7 @HardcoreEwok), the next in line at #9 in followers is @EwokLumat. He tweets regularly. No dirty tweets. For a little while he ran the #EwokFactMonday and #EwokDogTuesday campaigns. He even manages the most comprehensive Twitter list of every Ewok.

The award of Best Ewok on Twitter could go to EwokLumat, but it won’t. I manage this account. I can’t give the award to myself.

Circling back to @EwokBJs (#3 in followers), we skipped him because he frequently has dirty twets. But we’ll give the award to @EwokBJs, because he has way more tweets than me (2,100 vs 500). Even if his tweets can frequently be PG-13, he does tweet some funny (and non-perverted) tweets like this one:

This tweet is rather fitting, because Ewoks do have BBQs. In Return of the Jedi, the Ewoks were roasting Han and Luke. People tend to forget—Ewoks like to eat humans. Admiral Ackbar is an aquatic, humanoid species. Thus to Ewoks, Admiral Ackbar would be like a tasty aquatic snack!

Stats from the best Ewoks and the worst

2009 was a good year for Ewoks on Twitter. One-third of the Ewok Twitter accounts were created in 2009. The oldest being @MasterLogray.

When I found out my Ewok alias, @EwokLumat has a child in the Star Wars Universe, I had to create an account for her. Nippet is the baby seen in the basket in Return of the Jedi. I tweet little baby thoughts for this cutie.

The tweets are pretty silly, but whatevs. I have fun with it.

Most tweets per day

@HardcoreEwok steals the cake here with most tweets per day. But it’s greatly skewed since he signed up just 8 months ago. How will his account last over six or seven years?

WicketFTW is the only Ewok with more than 3,000 tweets. And the little guy hasn’t even tweeted since 2012!

Talk about hibernating Ewoks! These guys have been hibernating in the Endor Forest for seven years straight! Wake up!

For each Ewok twitter account, I looked at their best tweets ranked by twitonomy.com. This service ranks a user’s tweets by most retweets and most likes. For instance, here’s @EwokBJs top tweets: 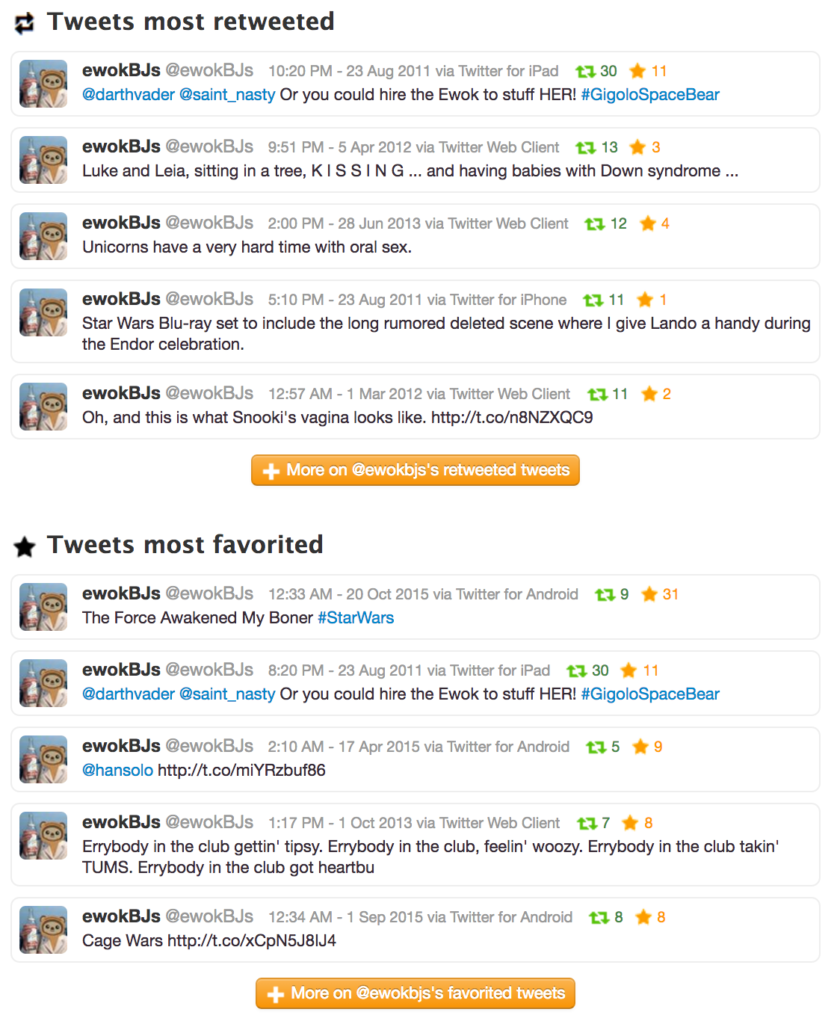 For Ewoks with lots of tweets, this initial ranking helped to narrow down the selection.

Other Ewoks have only a handful of tweets (in many cases under ten tweets!), so the pickings were slim for some. Here are the best tweets from each Ewok (presented in order of Ewoks with the most following to the least).

(@ewokBJs is listed twice, because he has lots of good tweets.) 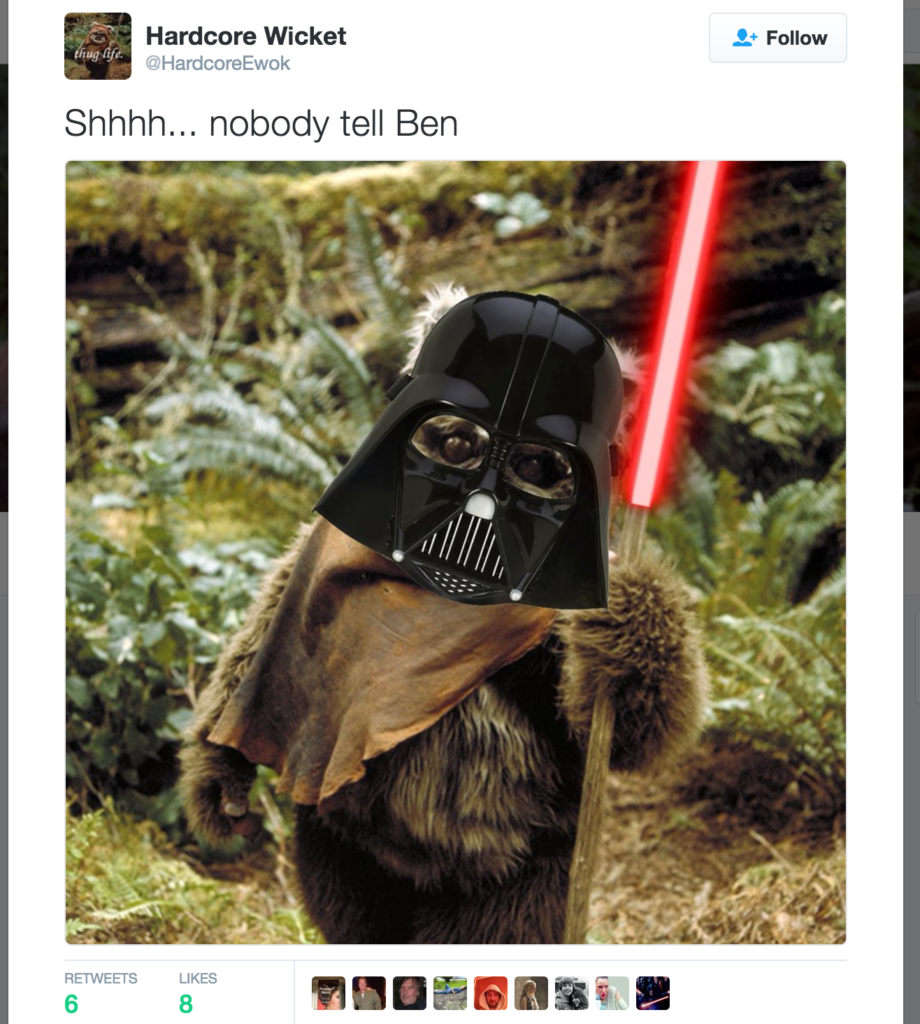 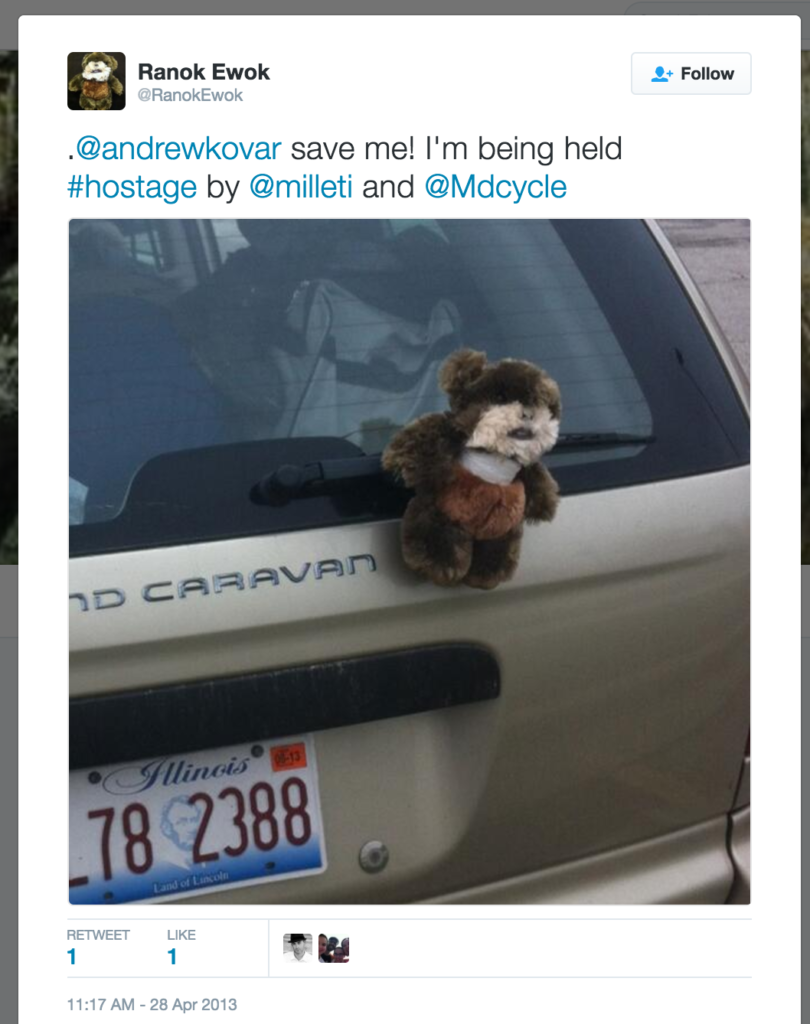 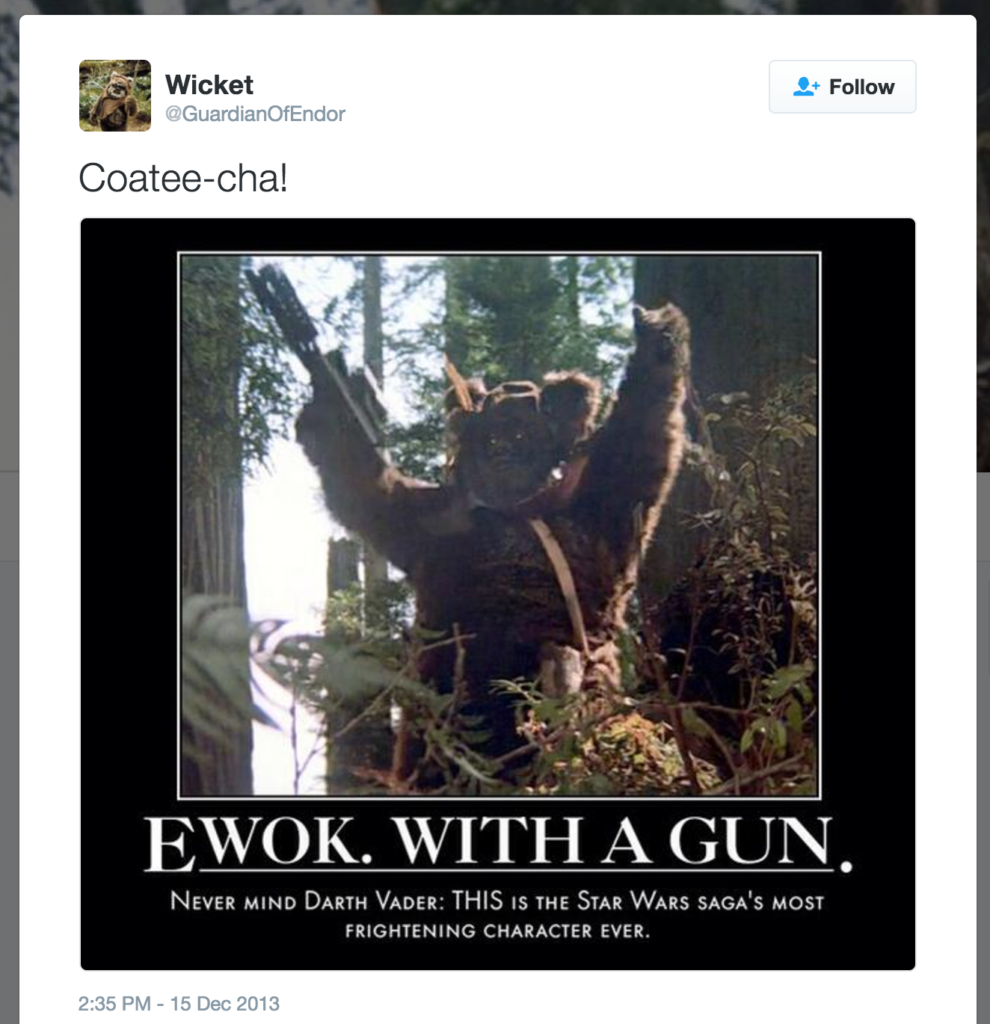 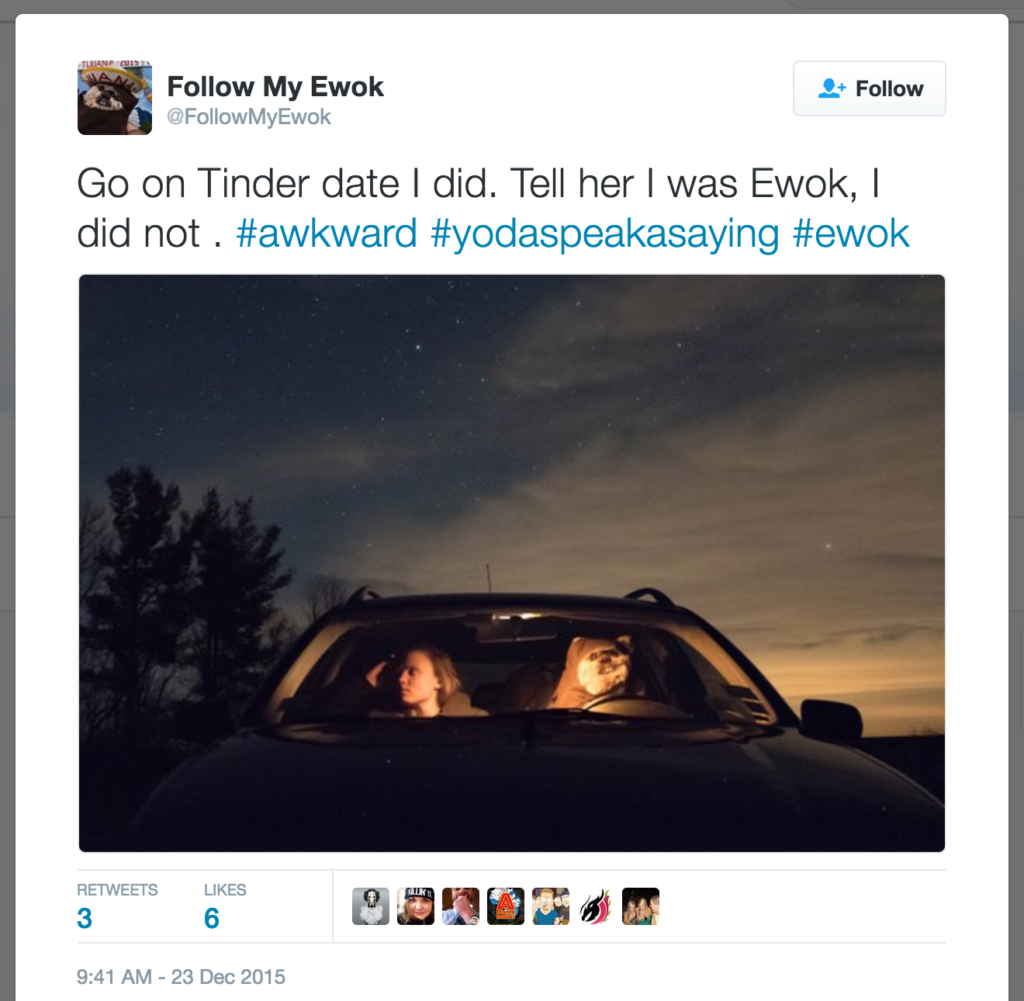 Ewoks who have no tweets that are good:

If a real Ewok had an account, it would probably have the sort of nonsense these three tweet. But as for the other Ewoks on Twitter, many are hibernating, but the others provide us fun, cute, and ironic tweets from the Forest Moon of Endor.