The most important command given to Neil Armstrong was to make sure he collected moon rocks as soon as he landed on the Moon. Just moments after stepping onto the moon and saying, “one small step for man, one giant leap for mankind,” Armstrong then took a purse-sized pouch out of his spacesuit’s pocket and picked up several rocks to place inside the bag.

NASA had to plan for the worst-case scenario if the astronauts were only going to be on the Moon for a couple minutes. An air leak, an explosion. Anything could have happened. If Armstrong had only minutes on the Moon, the most important thing he could do was collect this “contingency sample” of rocks, and put it into the pocket of his space suit.

The bag containing these contingency samples went for auction on Sotheby’s. This is the very first bag to bring back the first moon samples ever collected by a human in mankind history. 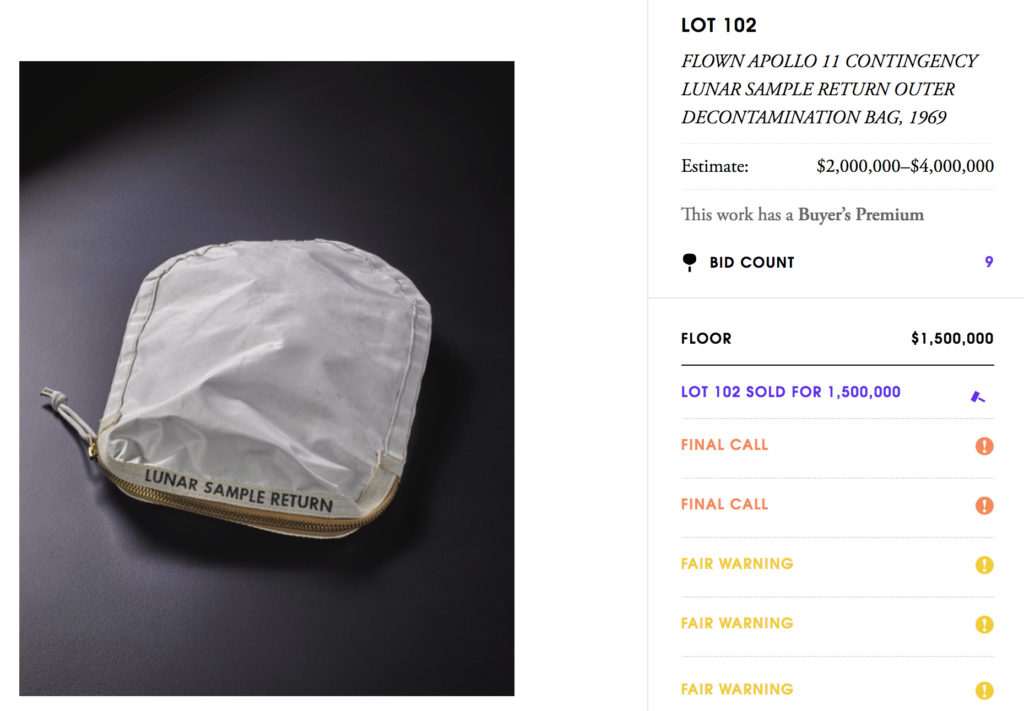 Very exciting. What a wonderful piece of space history! Everything from that space mission is property of NASA, and they don’t sell the items?

How did this space bag sell for 1.8 million dollars?

The Seattle Times reports that in 2006:

The government had seized the bag in a criminal case against Max Ary, the former president of a space museum in Kansas. He was convicted in 2006 of theft for selling objects from the museum for his own profit, according to court documents.

But because of a mix-up in inventory, no government official at the time realized the historical importance of the artifact, and without the knowledge of NASA officials, the U.S. Marshal’s Service put the bag up for auction in 2015 at forfeiture.gov, to obtain restitution in the case.

The bag was purchased as part of a lot in this U.S. Marshal auction. Chicago-based attorney, Nancy Lee Carlson, bougt the lot for $995. Being curious about the bag she sent it to NASA to see if it was a legit space bag.

That’s when NASA found out that it not only was a bag used by NASA, but it was used on the first moon landing mission! And the bag still has moon dust inside!!!

NASA wanted to keep the bag. But the courts ruled that since Carlson bought it from a government auction, she could keep it.

She initially was thinking about putting it on load to various institutions. But instead, she went for the money and sold it for 1.8 million dollars.

The rip in the lunar sample return bag

The bag looks totally cool. It has an incredible history. And this bag also has a large rip in the back!

Yes, this bag that supposedly still has moon dust inside, also has a large rip on the back. In fact, in a video posted on the Chicago Tribune’s website, you can see Carlson pull the moon bag out of a UPS bubble envelope. She holds the bag in various positions, which exposes the large gash in the back of the bag. 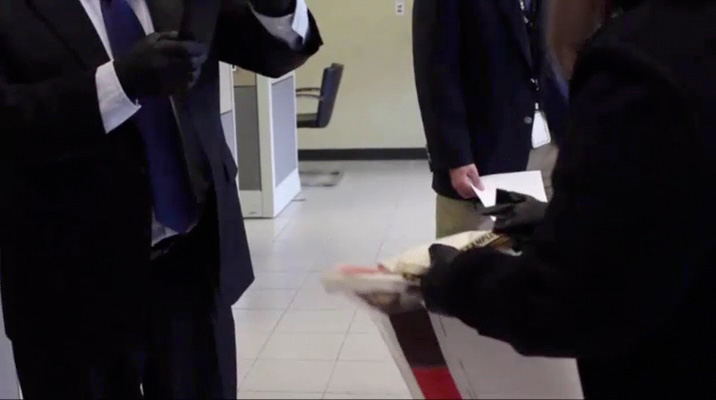 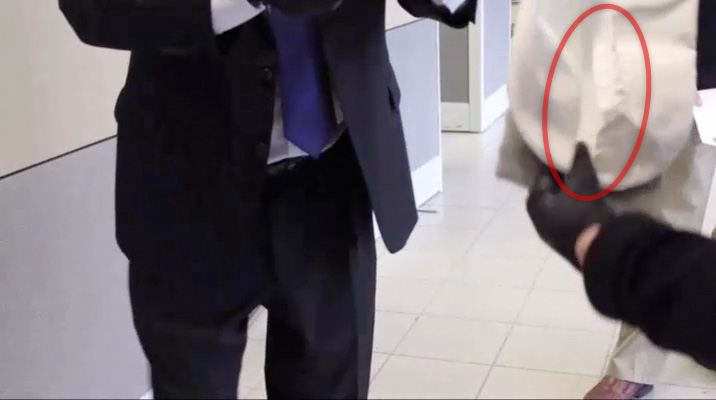 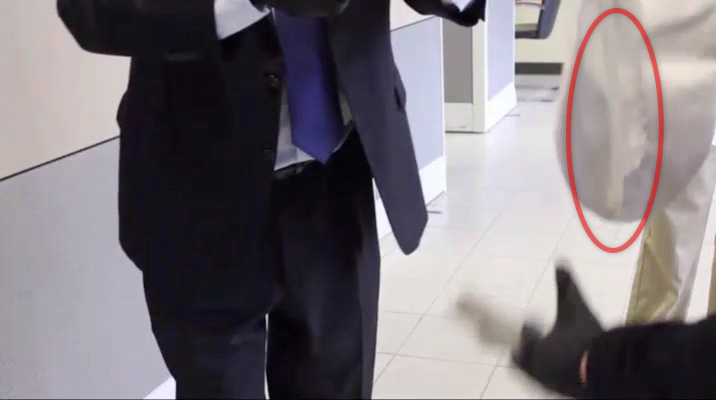 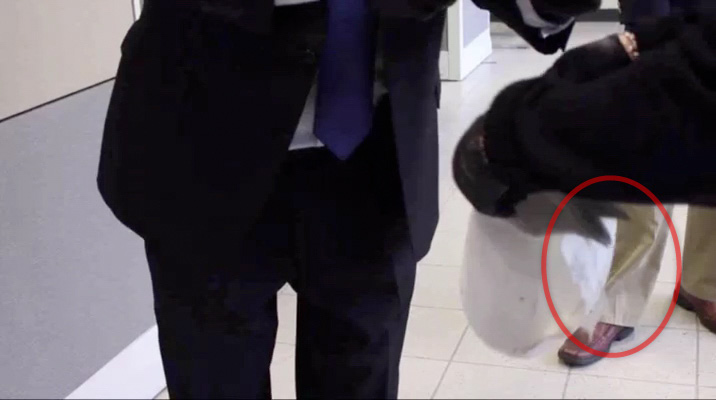 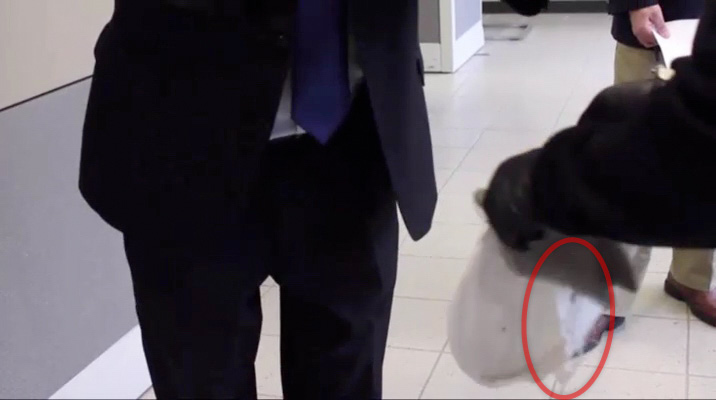 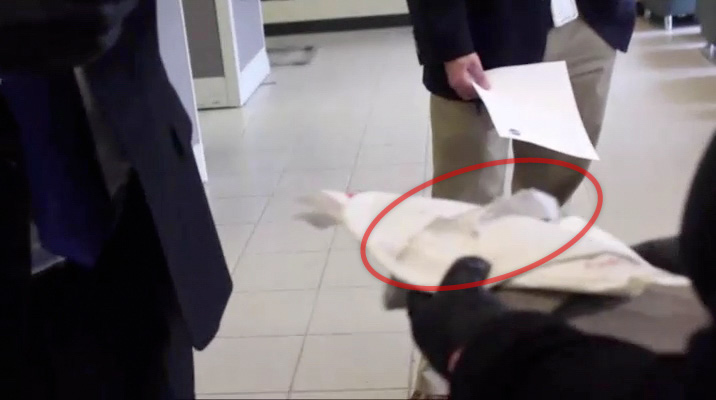 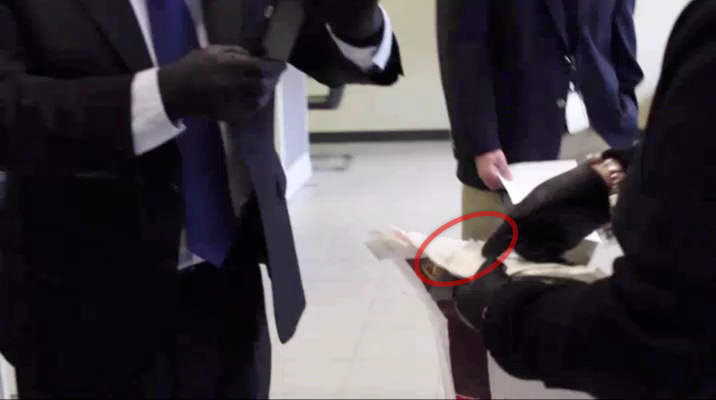 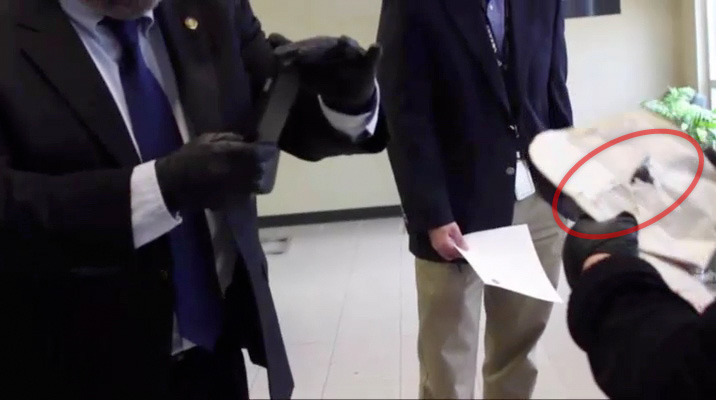 Um, I don’t think that moon bag has much moon dust inside anymore. If anything, the bag probably has more earth dust inside now.

To be fair, Sotheby’s does mention the rips in the description, “10 inch and 6 inch long parallel tears to underside of bag.” (screenshot). However, the photos in the auction listing do not show the rips. If there is a rip in the bag, shouldn’t Sotheby’s show it in the photos? When an eBay auction is selling something with a cosmetic flaw, sellers post pictures of the flaw.

In this case, it’s an item that is selling for at minimum $1.5 million. The “parallel tears” aren’t just tears. They are gashes.

Seriously, the gashes are huge. Anything that was in the bag, certainly isn’t in there now. And she was storing the bag inside a UPS bubble envelope! Can I buy that envelope for ten bucks! It probably has more moon dust inside than the original Neil Armstrong bag.

Here are the three photos posted by Sotheby’s. They are the high-resolution versions of this moon rock bag. 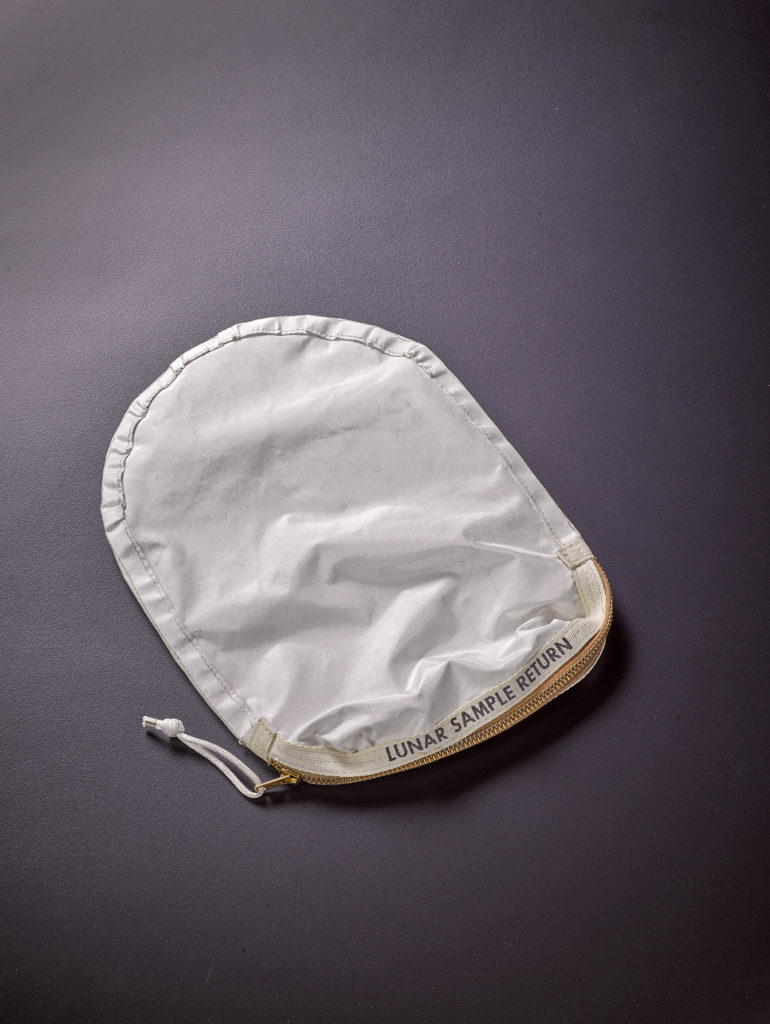 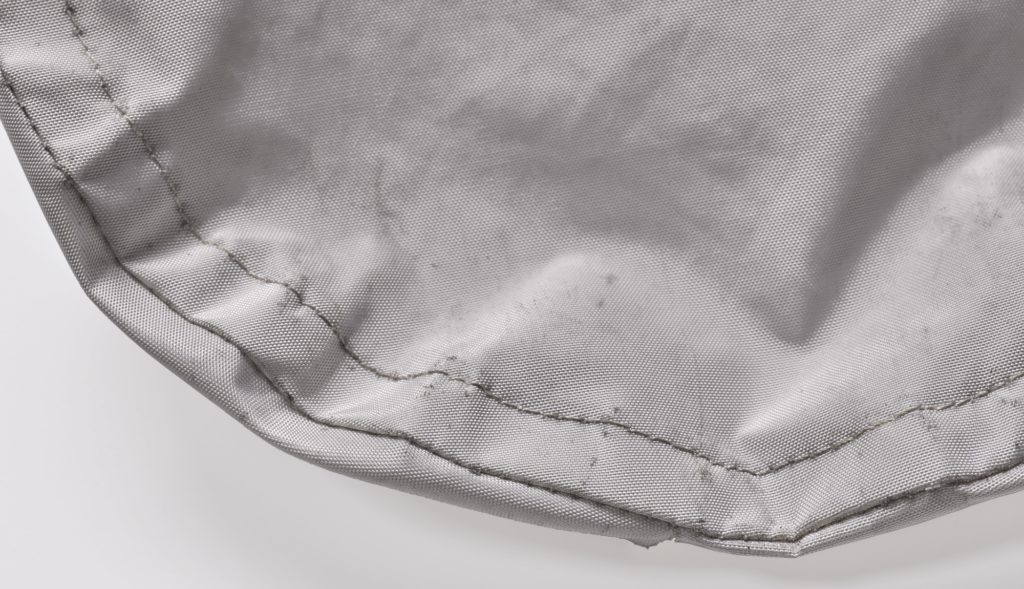 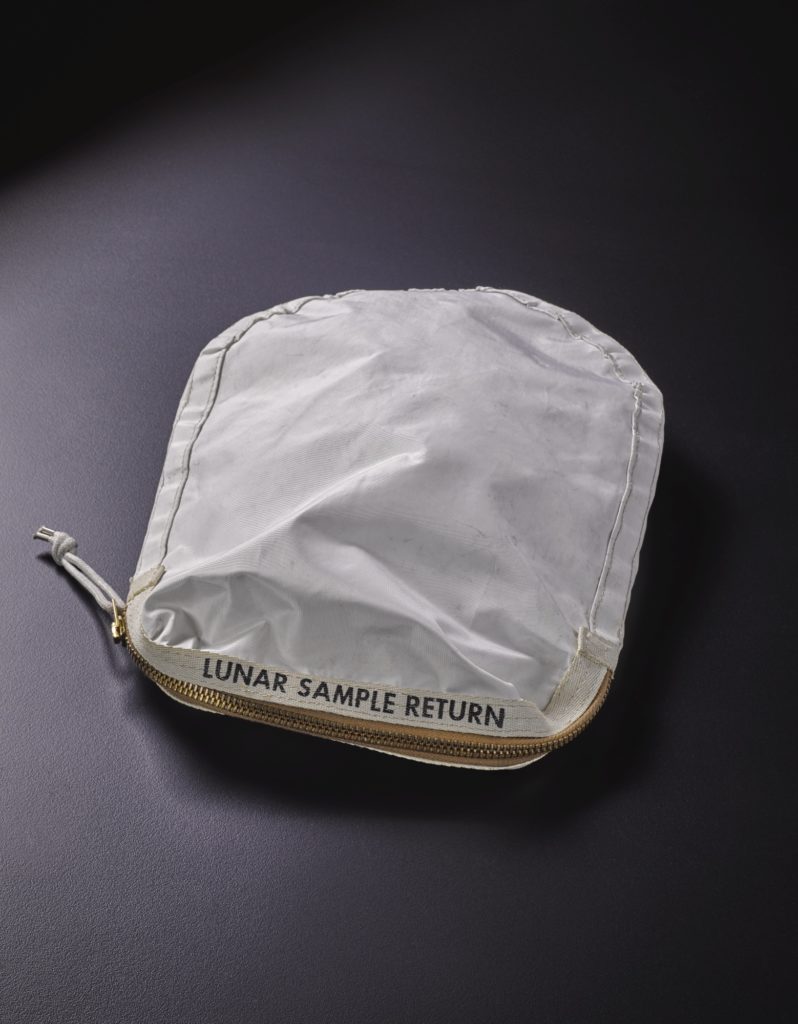