An impressive show was put on by this year’s batch of BFA students at the School of the Art Institute of Chicago. The expansive seventh floor of the Louis Sullivan Building on the State Street housed more than 300 artists’ work by students completing undergraduate degrees this spring. 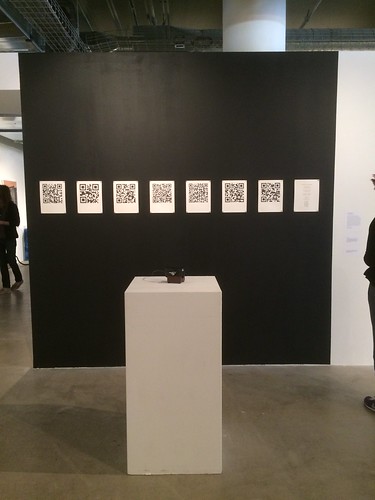 One artist’s work in particular stood out. A series of seven QR codes printed on white paper hung on a black wall. Doesn’t sound too exciting at first. Since I have a curious obsession with QR codes, this particular work actually drew me in. Scanning the first code, it translated to, “no one likes you” 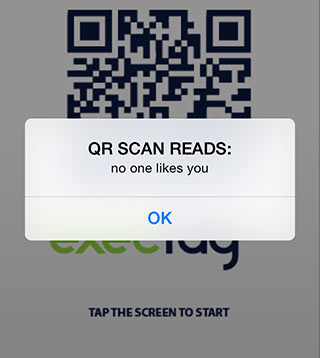 When we encounter QR codes, normally you get some promo website. This simple, hurtful message was startling.

Scanning another code, it brought up, “you have pretty eyes but your fat”

These insults were shocking given the simple presentation on the wall. What is the artist intending here? That the viewer’s feelings are hurt? That sort of feeling is exactly the point. The artist Josi Yingjiao Pei created this series to highlight the destruction that cyberbulling causes.

The Invisible Scar is a study that examines the manifestations of cyberbullying and teen depression. Cyberbullying happens when people use electronic technology to harass, threaten or embarrass each other. It is even worse than the traditional schoolyard bullying since it can occur seven days a week at any hour. By using search engines, I found many teens that committed suicide due to endless bullying messages they received via emails and social networking sites. Each QR code corresponds to one single victim, and the texts behind the QR codes are actual messages and comments I found on line that relate to the death of the teens. The installation is a memorial to seven of these young victims. By interacting with The Invisible Scar, the viewer turns into an experimenter, observing and feeling the actual impact that cyberbullying has on individuals.

The seven teens listed are:

I encourage people online to scan all QR codes. The messages are very somber, and truly hit the emotions of how awful cyberbullying is. The words are so devastating, I don’t want to repeat them on my this blog post. You truly need to experience scanning in the codes and seeing the results. 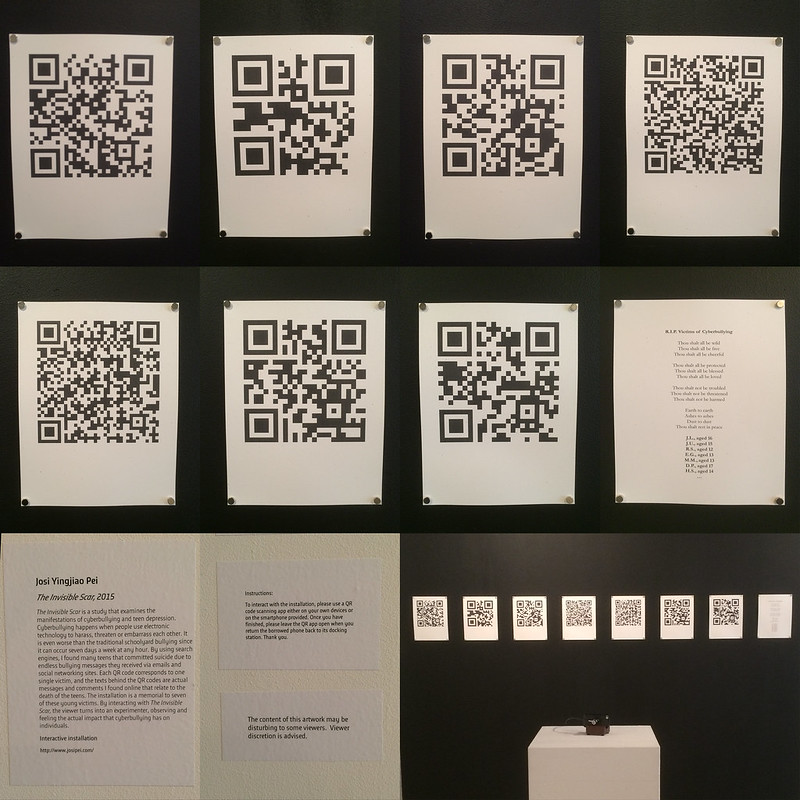 Doing this act of scanning in the codes with your phone connects the viewer with impact that these messages are digital. Phrases that are tossed around on social media sites that destroy people’s lives.

This is one of the best uses of QR codes I have ever seen. The medium works so incredibly with the message. Josi Yingjiao Pei’s website, josipei.com shows a few of her other works that carry her themes of memory, loss and displacement (Pei uses those three words to describe her work). From photographs of landslides in the Donghekou Village of China to melting glaciers in Alaska projected onto a human body, Pei’s body of work is already looking very mature for an undergrad student. I can’t wait to see what future works she will be creating.

Sarah, very good point, bringing out the meaning behind the title of the artwork, “The Invisible Scar”

I was/am so moved by this piece! The topic is relevant and touches a wide-ranging audience. And then there is the impressive symbolic choice of the QR code: a technological innovation that simultaneously hides (on the surface) and reveals (through the link). Just so, this art work draws awareness to the covert pain that cyberbullying inflicts upon its victims. The more art work and media that exposes cyberbullying the better. It remains an issue because it becomes visible for a window of time, then becomes “invisible” again.