Magic covers the ground with the first snow of the year. Everyone is an artist with boots acting like printing plates on the fresh white sheet. Creating prints in the ground, we look back to admire our work.

Start a new holiday tradition by photographing your very first footprint in the season’s snow. By capturing this moment, you preserve the day of the year when the snow first fell, and the location where you experienced it. The design of the footprint might even make you recall what shoes or boots you wore on that first day.

The first snow of November 2013 came while I’m working at the Tribune Tower (just a few days after 700 layoffs were announced, thankfully I wasn’t one of them). Taking a quick break for lunch, I dash outside into the horizontally blowing snow.

All the snow on the sidewalks in downtown Chicago melted through the constant salting of building property managers. However, the medians retained their snow. While crossing Michigan Avenue, a fresh blanket of snow with no footprints begs to be walked upon. As my boots left their trail of footprints, I look back to admire my work, continuing to cross the street. Not stopping I think how taking some photos would be nice. When the pedestrian walk sign came back on, I returned to the scene to snap some pics. A tradition is born.

Footprints are fascinating throughout history, culture, and everyday life. First steps are often significant. Neil Armstrong’s footprint on the moon reveals man’s first step onto the moon–heck, the first step a human has ever taken on another celestial body. Image credit: NASA 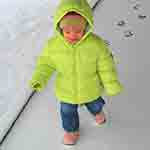 A child taking her first steps in the winter snow. The delight on her face as she discovers how she can make imprints on the snow with every step. Image credit: wildphototakermaker on flickr The footprints of the Buddha abound throughout Asia, dating from various periods. Japanese author Motoji Niwa, who spent years tracking down the footprints in many Asian countries, estimates that he found more than 3,000 such footprints, among them about 300 in Japan and more than 1,000 in Sri Lanka.

The veneration of the feet of gurus or deities were commonplace in ancient India, placing one’s head at or under their feet being a ritual gesture declaring a hierarchy. Image credit: mmm-yoso, text source: Wikipedia 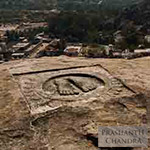 Chandragupta Maurya (born c. 340 BCE, ruled c. 320 BCE ‚Äì 298 BCE) was the founder of the Maurya Empire. He succeeded in conquering most of the Indian subcontinent and is considered the first unifier of India as well as its first genuine emperor. A small temple marks the cave (Bhadrabahu Cave) where he is said to have died by fasting.

The footprint as a sculptural object has a long history stemming from the first examples made in India.[6] These were made during the pre-Greco-Buddhist phase of Buddhist art at Sanchi, Bharhut, and other places in India,[7] along with the Bo-Tree and the Dharmachakra.[8] Later, the footprint-making tradition became prominent in Sri Lanka, Burma, and Thailand. Image credit: Prashanth Chandra on flickr, text credit: Wikipedia. When a baby is born, often footprints are made with ink. How can you do this safely with a newborn?

Homewithtwinsmama reports: Easy as pie, I do it for all my homebirth clients. Washable stamp pad from craft store ( I carry blue and hot pink), nice art paper, baby wipes. Press baby feet to stamp pad one at a time to coat completely. Stamp two or three pieces of paper (will be a bit lighter each time). Baby wipe to remove ink from foot fast. I can do both feet in under three minutes. They don’t like it much, because they don’t like you holding feet that long usually. Photo credit: somwersnet on flickr 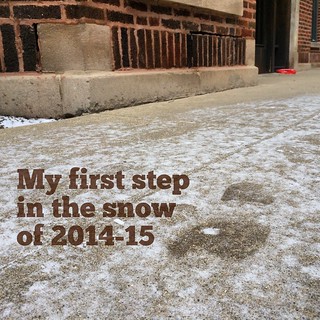