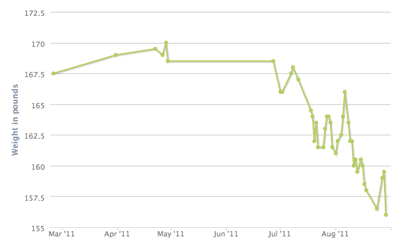 Watching your weight every day is fine, but a more effective method is to see your trend over the past week. Using the new maldre math operation, you can effectively analyze your weight once a week.

Almost every day on Livestrong’s Weight Tracker, I enter my weight for that day. Which is good and all, but I find it more effective to do an analysis once a week to see where I am.

For the past week I take my top weight and my lowest weight, and then I average them. That is my weight for the week. For instance take the previous week,

Why the “maldre” math operation works:

Why is this math operation called the “maldre?”

I recently asked on facebook, “What’s the term called when you take the highest and lowest number from a set of numbers and average those two extremes?” And nobody knew the answer. Some people thought it was mean. Some thought it was average. What i’m describing is indeed not mean, median, mode, or range. Did I uncover a new mathematical operation? If so, what should it be called? Seeing that three of these already start with M, let’s name this one with a name that starts with M… Hmm, what should it be? I know! Maldre.

(most of this example was copied from purplemath.com)

The “mean” is the usual average, so:

The “median” is the middle value

The “mode” is the number that is repeated more often than any other, so 13 is the mode.

The “range” is just the difference between the largest and smallest values. The largest value in the list is 21, and the smallest is 13, so the range is 21 ‚Äì 13 = 8.

One of my friends, cat, summed it up this mathematical operation perfectly: “That’s a Maldre, averaging the extremes :D”

Oh… NOW I understand what you were asking for. Mid-range or Mid-extreme average: http://en.wikipedia.org/wiki/Midrange You should edit the wikipedia post to add that it is “also known as the Maldre”

Sparx is correct. I tutor statistics.

Ohhh, mid-range or mid-extreme. Oooh. Well, i’m pleased that both of those words start with the letter M.

they both have m,d,r, and e in them. in that order.

I’m a Maldre and this mathematical operation makes my brain hurt.