What do you think of the CTA ad for the Picasso show at the Art Institute?

My brother, Erik, has some excellent points:

Overall, I like it. It captures some of the cubist charm of Picasso’s work. Part of me feels like they could have take this 1, 2, 3, 10 levels deeper and really explored a mix of typography and cubism. There’s plenty of talented designers/tyopographer/illustrators that could have done so. A current movement/trend in the graphic design world is adding a ton of noise to gradients which just so happens to mirror the textures found in many of Picasso’s work. The opportunity is just begging to be explored.

But at the end of the day the Art Institute decided to keep the execution simple on this concept and it still works. It presents the playful concept in a way that’s approachable and curious and does so in an immediate way which is vital for any sort of advertising.

I agree completely. They could have pushed it further. Erik expanded on that by giving a very good suggestion with the noise-gradients. This design needs something more. The simplicity, colors, and playfulness of this ad makes me think this is a show in the children’s section of the Art Institute. However, this show talks about how Picasso had multiple affairs throughout his life and how he often made artwork of his dalliances. He has more children from his affairs than with his real wives.

But perhaps the Art Institute is trying to capture a wider audience by making this ad playful. “Look at how fun Picasso is!” Maybe the Art Instiute is right on with this. For the general public, they will go see the Picasso show because it’ll be fun. Not because there is some sort of incredible depth to his work–which there is depth to his work, but the general public isn’t going to the show for that, or least I don’t think Joe Schmo wants that.

This ad design reminds of when I was desiging the ebook cover for Art in a Minute’s “Art & Scandal” earlier this year. My first designs were very flat. They didn’t capture your awe or attention. But when I added texture to the title, then the book cover was more dynamic and had more allure.

I want this Picasso ad to have more allure and curiosity. Instead it’s just a bunch of kids letters floating around. 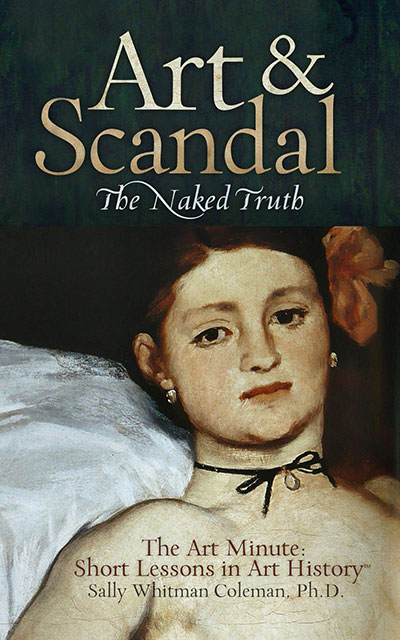 Yeah, this cover can be kinda intense, but that’s the point. This book is about scandal. The woman on the cover is staring at you, alluring you to the inside of the book. The actual exhibit of Picasso’s work at the Art Institute is the same way. There are many examples of Picasso’s mistresses in the show. So to have the advertising be more child-like is very misleading.

— Art Institute of Chicago marketing to children for Picasso show

— The aesthetics of baseball autographs