I’ve got several art projects that take place in art museums. Last summer I got reciprocal art museum pass from the Walker Art Center and it allows me to go into over 400 art museums nationwide. With this freedom, I’ve been attending art museums more. Ideas have been sprouting for how I can create art in the museum. And how that art can interact with the existing collection.

To help me aggregate and see what’s on my plate, here’s a collection of ideas and projects: 1. Origami made from Felix Gonzalez-Torres paper

Felix Gonzalez-Torres’ stacked paper has much potential. A stack of paper waiting for your imagination to take hold and shape it into something. This origami series is to show some of the possibilities of what this stack holds. As the origami object is photographed on top of the stack, it moves the stack upward into the world of creation. This is how the typical museum functions. The final product is upwardly shown.

Read more about this project on the flickr set. Some baseball player autographs have wonderful aesthetic qualities. I went on eBay and purchased the autographs that looked most visually interesting. Then I went to the Art Institute of Chicago’s modern wing and matched up the aesthetics of the autograph with modern paintings. Read more about this project at this blog post. The Art Institute of Chicago’s official twitter account calls this series “wild card.” Little did Joseph Albers know that 46 years later his “Home to the Square, Soft Edge–Hard Edge” would be used as a self-portrait by the admiring artist Matt Maldre. I want to start a series of self portraits in modern art. (flickr set, facebook post) Ellsworth Kelly featured in this photo. I’d like to do more explorations of how artworks look when you stand close to the work and see how the museum lighting reflects off the artwork. (flickr set)

On the Spudart Facebook Fan Page, I explore potential ideas for art projects. Here are the museum-related ideas I’ve posted in the last several months. Taking the light reflections project further and take photos of famous artworks with colored lights shining on them. (facebook post) Bring a section of chain link fence and photograph museum artworks behind it. This particular photo isn’t a museum artwork. It’s a nativity at the Farmer’s Garden Market across from my apartment. Seeing this inspired the idea to do it in art museums. (facebook post) 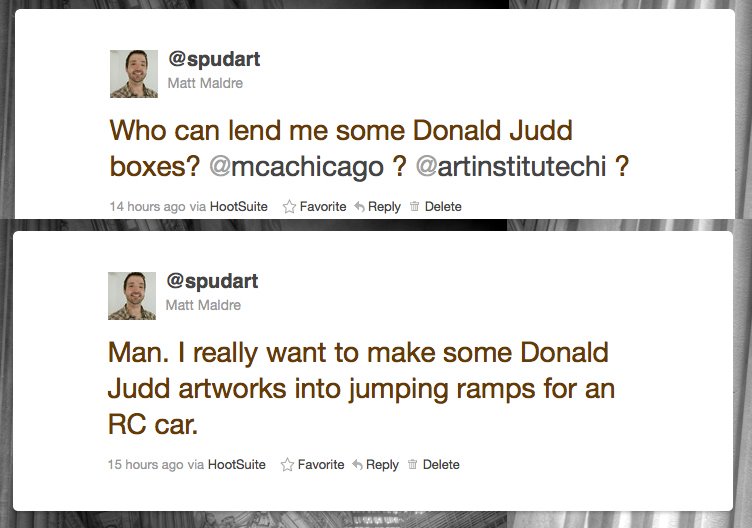 I really want to drive a remote-controlled car around in an art museum. The above are some tweets that I made with the Museum of Contemporary Art’s response. (facebook post)

I’m starting a new Spudart series where I ask art museum guards a question, and then later I draw their portrait from memory with their answer. What would be interesting questions to ask the guards at art museums? (facebook post)

10. Other people’s notes in museums

Whenever I see someone writing notes in a gallery or museum, I want to ask that person if I can take a photo of their notes. What do you think of this as a new art series? (facebook post) 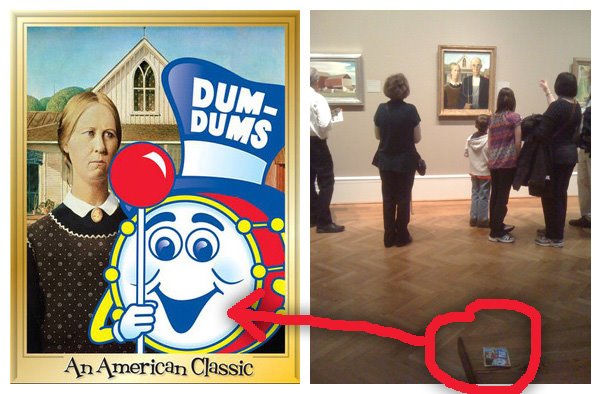 Anybody know of any museums or galleries in Chicago that have guest books that people can leave comments? It would be really cool to photograph the comments left in these books. Often the comments are more interesting than the art itself. (facebook post)

It would be interesting to bring a sheet of glass to an art museum and photograph it in front of artworks. The idea is that it would capture other interesting reflections that would interact with the artwork behind the glass.

It would also speak to several points:

Does anyone have any picks for which art museum projects I should focus on first?