DC to lose grit as it moves from New York to Burbank, California. 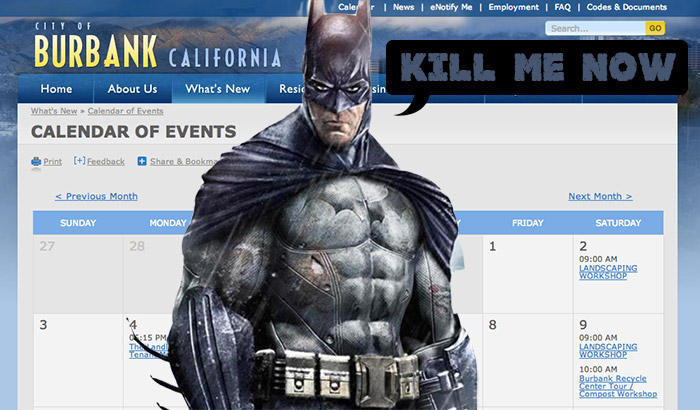 Literally everything is more difficult. We had a huge Halloween party and a costume contest with the Burbank office and New York on a remote screen. We use all the best technology to make sure we’re remotely connected. But it still always falls apart. People feel disengaged.

The corporate BS could be smelled from coast to coast.

Nelson explains that reducing staff wasn’t the goal of the move. “No, this is not about any kind of efficiency in terms of overhead or anything else. We’re offering everyone a chance to move. We have a very competitive package with all sorts of components in terms of relocation and other services. We’re doing everything we can to help people find it exciting.”

Yeah, because Burbank is so terribly EXCITING! WOOO! Suburbs! Comicsbeat goes on to point out that they’ll lose touch with the New York freelance base. Nelson claims, “I am 100% sure we can maintain the commitment to our business in the exact same way we have by having the whole operation here in Burbank”

Funny. You want all the employees together in one place, yet you want to distance yourself from the strong freelance talent. Hmmm.

“This is not the corporatization of DC,” she went on. “It isn‚Äôt about folding DC into Warner Bros. We’re going to help DC feel like more of an important priority in Warner Bros.”

How can this possible NOT be about the corporatization of DC? Um, the very definition of “corporate” is: “United or combined into one body; collective.” By moving your entire operation to be in the same place as the rest of the company, you are making it one collective. Thus a corporation.

Some of the comments on this page are great:

This is a legitimate question: isn’t it fair to guess that a lot of the toughness and grit from D.C. is going to fade? The West Coast has a very different character. I can’t help but think that will eventually seep into a set of properties that have always felt, to me, very east coast.

These are creative people and I know there creators are all over the place, but‚
it feels like just the location shift is going to be felt before long.

There’s a reason Jay Leno tapes his coast in L.A. and Letterman does his in New York, you know? It gets in there.

Will it kill off DC? Probably not but it’s going to take a long time to adjust. Kinda like the length of time it took the Dodgers after they left Brooklyn

It saddens me to see DC move away from New York City. Does it disappoint you too? Leave your thoughts in the comments.

Marvel for the win.