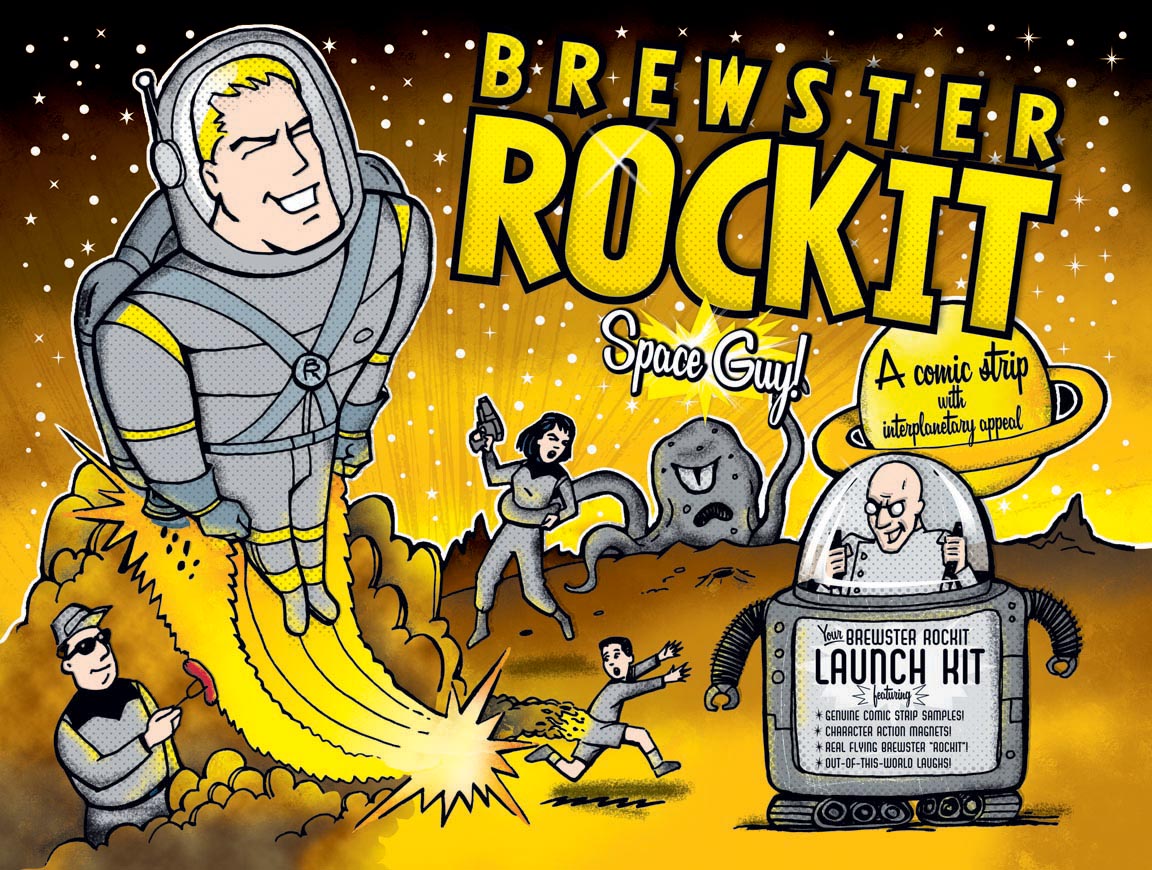 This appears in the 2005 Graphic USA Design Annual.

Tim Rickard sent a comic strip proposal to Tribune Media Services for Brewster Rockit. TMS decided to take Brewster under a 8-week development deal to help improve the strip before syndicating it. David Rothkopf (TMS Copywriter), Mary Fischer (TMS Editor) and myself were called on to assist Tim to improve his great comic strip.

After the 8 weeks we had an improved comic strip ready to present to the syndication group of TMS. A decision was to be made if the comic strip was to be developed. Dave, Mary and I created a 10-ten reasons why Brewster should be syndicated list. We were able to convince the 15+ member committee to syndicate Brewster Rockit!

Dave and I worked on the sales kit to create create excitement among newspaper editors to buy this comic for their paper.

Normally comic strips will get a nice custom folder to contain the comic samples and character sheet. But for this unique strip, Dave and I knew we HAD to do something different.

We brainstormed many ideas. I went to the library and took out many books on science fiction, toys, and retro culture. We also looked many printouts from the internet of classic movie posters. It baffles me how designers don’t go to the library for ideas on how to design something. It’s such an incredible resource to use.

We settled on doing a toy box to contain:

Fonts: Futura and from fontdiner.com (it was a great deal to buy these fonts!) Kentucky Fried, Lamplighter, Mister Television, Milwaukee 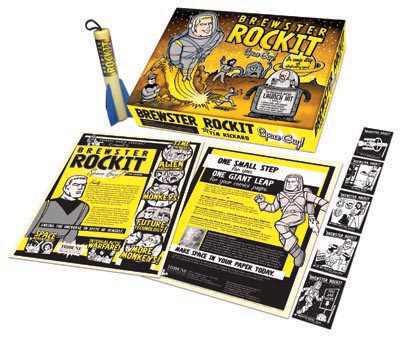 Many many covers of comic books provided inspiration for the scene on the cover of the box. I wanted something dramatic that showed the personality of all the main characters of the comic strip.

Brewster was to be doing something noble and brave, but ultimately goofball. He dramatically flies away, but his trail of fire from his jetpack leaves Winky on fire. Winky always ends up being the test dummy for the crew’s many adventures. The Engineer Cliff Clueless is roasting hot dogs from Brewster’s flames. Pam is being the brave woman holding a rifle in hand. Dr. Mel Practice’s satellite serves an area for type treatment on the box.

The sketch I sent to Tim: 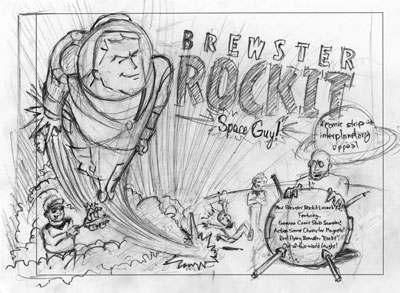 The artist of Brewster Rockit had some great ideas on how to improve the characters. I was afraid Winky running on fire would be too grusome, and Tim suggested that we have Winky’s butt on fire–perfect! He also put Pam into the arms of one-eyed octopus. Dr. Mel’s satelitte became a much cooler robot!

From this I colored the artwork into what we see in the box cover now: 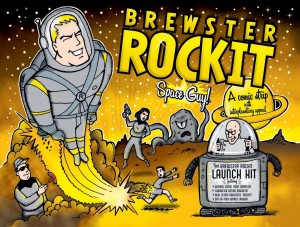 For the neo-retro theme the colors are a muted yellow and brown. The ben day dots add for a cool printed feel. And lots of photoshop brushes from http://studio.adobe.com. The colors on the box are a standard CYMK, however the normal yellow is swapped out with a fluorescent super bright yellow for that extra pop on the sides of the box.

Inside the box is a 8.5 x 11-inch sell sheet. I wanted the design of this to look like those cheesy ads found in the back of classic comic strips.

Here’s the set of six magnets. Here we let Tim Rickard run free with however he decided to depict the characters–as long as he stayed within a square format. I then added the funky little design border to identify both the comic strip and the character’s name along with the character’s title. (a bunch to fit in a 1.75 x 2.25-inch space).

There was also a last minute character sheet. Originally the magnets were going to be used to describe to introduce the characters, but the sales team wanted a character sheet with more information.

This is the label that runs on the foam rocket.

Brewster KICKS Rocket! This stuff is greeeaaaat!!!! I want one……. I can only hope that I have something this incredible created for my comics someday.

Can I get a color poster version of the character sheet? And a set of character magnets? This stuff should be on the strip’s web site, for Pete’s sakes. …Mark

I just won a Brewster Rockit kit in a charity silent auction. What age group is this appropriate for? My grandchildrenare 13, 5, and 1 yr respectively. Would this be appropriate for any oft hem. I don’t want to insult any of them by giving them something that is meant for younger children. Thanks, Jane

Jane, congratulations on your win! This kit was originally designed for editors of newspapers, ant not as a consumer toy. It’s more of a collectible sort of thing. But it could be a fun gift for a child. It has magnets, a foam finger rocket, and super funny comic strips! The five year old would be too young to read the comic strips. So I would think the 13-year-old would enjoy the comic strips.

I love your comix, dude, though, I feel vaguely miffed that you didn’t pay tribute to your inspiration, my non-syndicated comic, Rusti Sprokit, Space Babe! Keep ’em flying, guys!