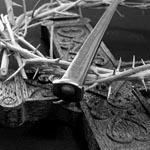 My away message for work on December 25:

–December 25, 1100 King of Jerusalem crowned (Boudouin I of Boulogne)

It’s interesting so many nations would choose December 25th to crown their king. Why? Because the true King, Jesus Christ was born on that day.

As it was predicted 700 years before his birth,

“For unto us a child is born, unto us a son is given: and the government shall be upon his shoulder: and his name shall be called Wonderful, Counsellor, The mighty God, The everlasting Father, The Prince of Peace.” Isaiah 9:6

My girlfriend left this comment in response to my auto-email: ============== oh, NICE! that’s very interesting although, Jesus wasn’t really born that day. it was a major pagan holiday in rome, the Christians chose to celebrate Jesus’ birthday during that time. I’ve heard scholars think He was born in the summer months. ==============

And here’s my response: =============== ah yes. VERY good point! But, December 25 is the celebrated holiday. So when you have these crowning of kings, they picked the very celebrated day that Christ the King was born. They couldn’t just pick some day in the summer to be crowned, because there is no official day in the summer. So they pick December 25, because they want to be king the same celebration day for the birth of the best King. (although Christ’s kingdom is not of this world like the earthly kings). It’s like, put yourself into the king’s shoes. “hmmm, i’m going to be coronated king. What day shall I choose? I could choose my birthday. That would be nice. But wait. I could pick the celebrated day of another great king to show that I’m following in his lineage of power and esteem. Let’s seee… who is a great king… oh yes. JESUS CHRIST–GOD HIMSELF INCARNATE. Can’t get any bigger than that King!” Now seriously, it takes some megaballs to do that. In fact balls so big that it’s not very humble. But then again, maybe they were paying homage to Christ. Maybe they were dedicating their kingly position to Christ. I’m sure that some of these Kings, this was not the case, but maybe it was the case for some of them. It would be interesting to see the history of these kings and what they did. And if any of them were Christians. I think i’m gonna add this as a comment on this post. ===============