[Update: Apple has explained they do have a heated roof. Blair Kamin of the Chicago Tribune reports:

“The roof has a warming system that’s built into it,” Apple spokesman Nick Leahy said. “It needed some fine-tuning and it got re-programmed today. It’s hopefully a temporary problem.”

So I take back that this is a design flaw. This is just a minor tweak that Apple is adjusting. For the archive, the original blog post is below] 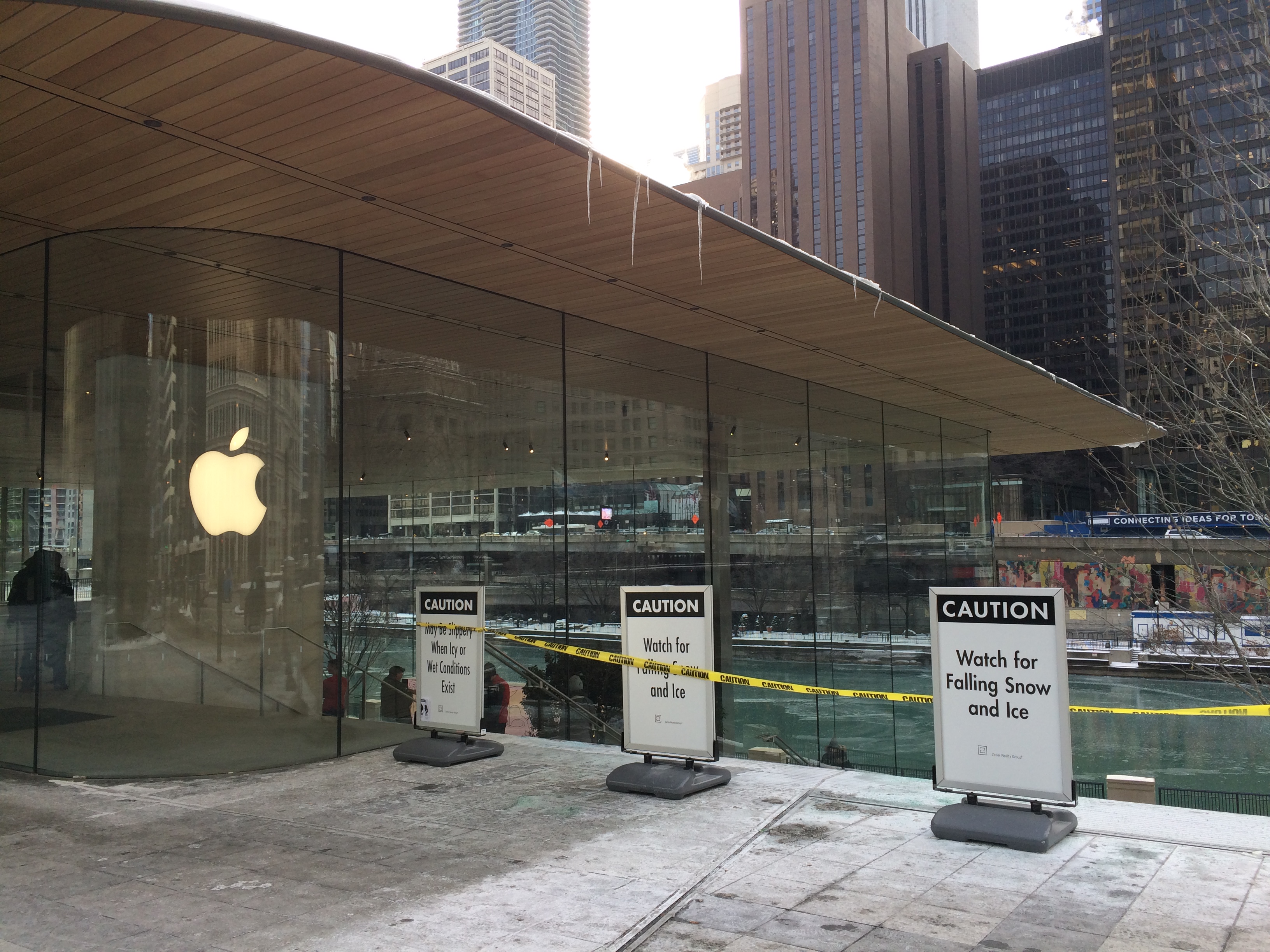 Wow! Fancy!
Apple’s newest flagship store in Chicago opened with much critical acclaim for its design. Instead of being just a commercial space, Apple is using a “Town Square” store approach. Each store, like this flagship, will now be a community hub. How delightful! Right? Even the materials are amazing. The store’s walls are wraparound glass with an an ultra-thin carbon fiber roof in the recognizable shape of a Macbook cover.

Ut-oh…
Although the fancy roof has a problem. The edges of the roof slope down without any gutters to catch the melting snow. Pedestrians under the roof will get attacked by sliding snow.

Since this store is a community hub, people are supposed to gather around the store and delight in their Apple products. But now they’ll get hit by falling icicles! 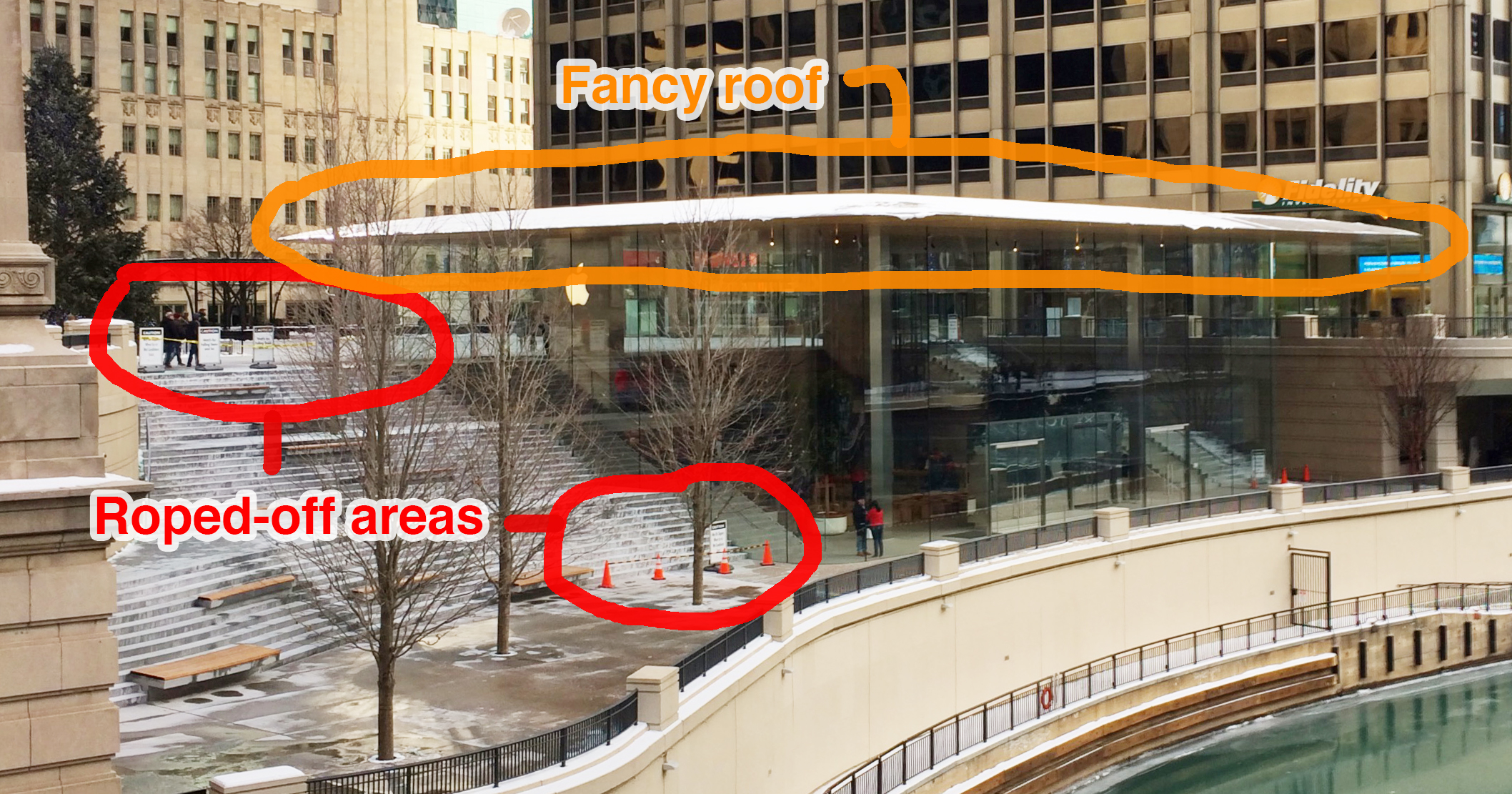 Danger!
Apple had to rope off their outside community area, so nobody will get killed by the fancy sloping roof of their Town Square store. Sorry! This area of the town is off limits–too dangerous! 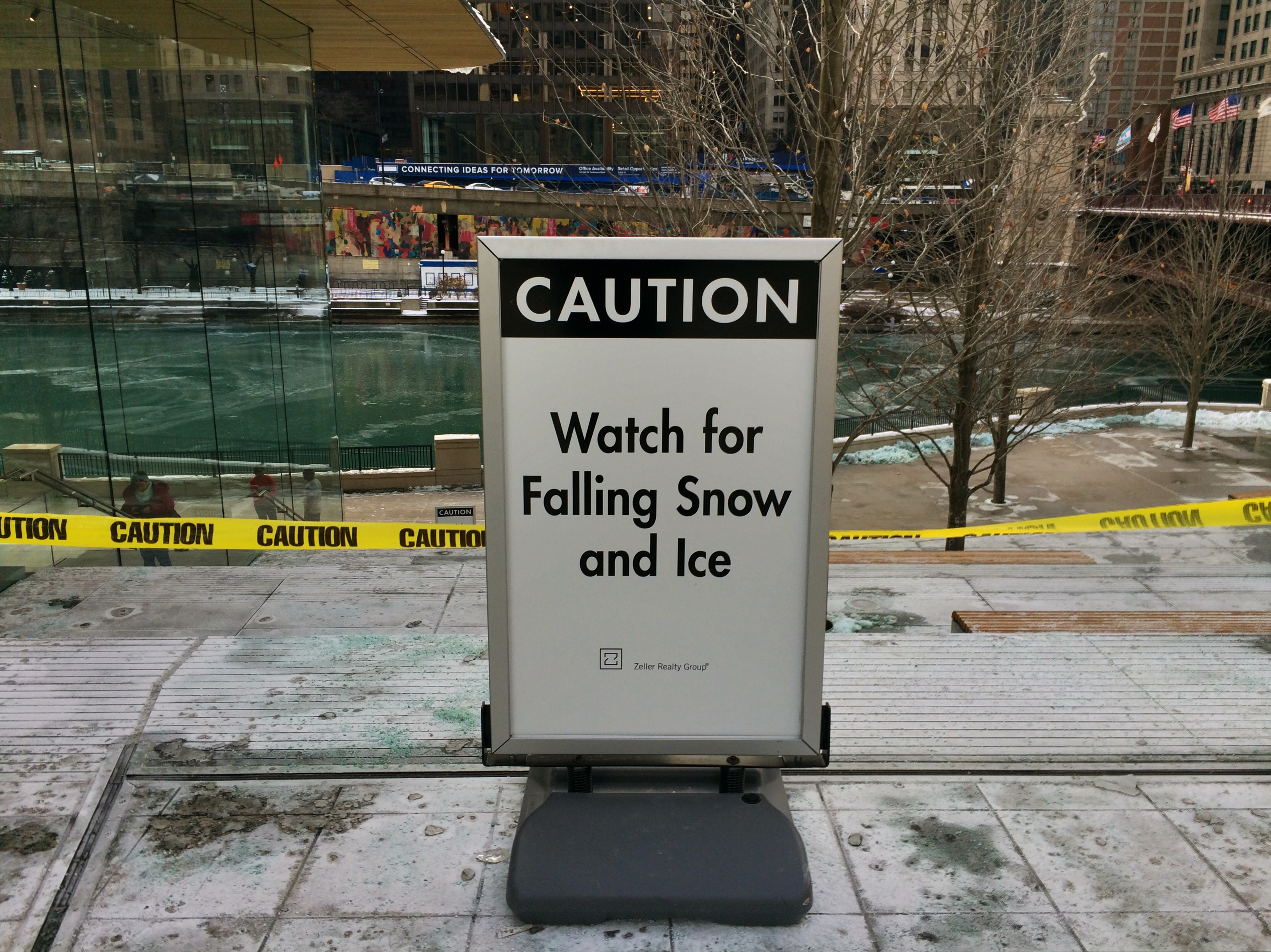 Maybe next time Apple will consider the actual community where their stores are built. Y’know, basic things like in Chicago, the weather gets cold. It snows. The snow falls off the roof. Don’t design a sloping roof where the snow can’t be caught or guttered off somewhere. (technically, Apple itself didn’t engineer the roof. It was an engineering company. 9to5mac user “Kiwi” explains.)

UPDATE:
This has been blogged by Daring Fireball. Which then touched off a bunch of fun tweets:

And one guy called me a quack 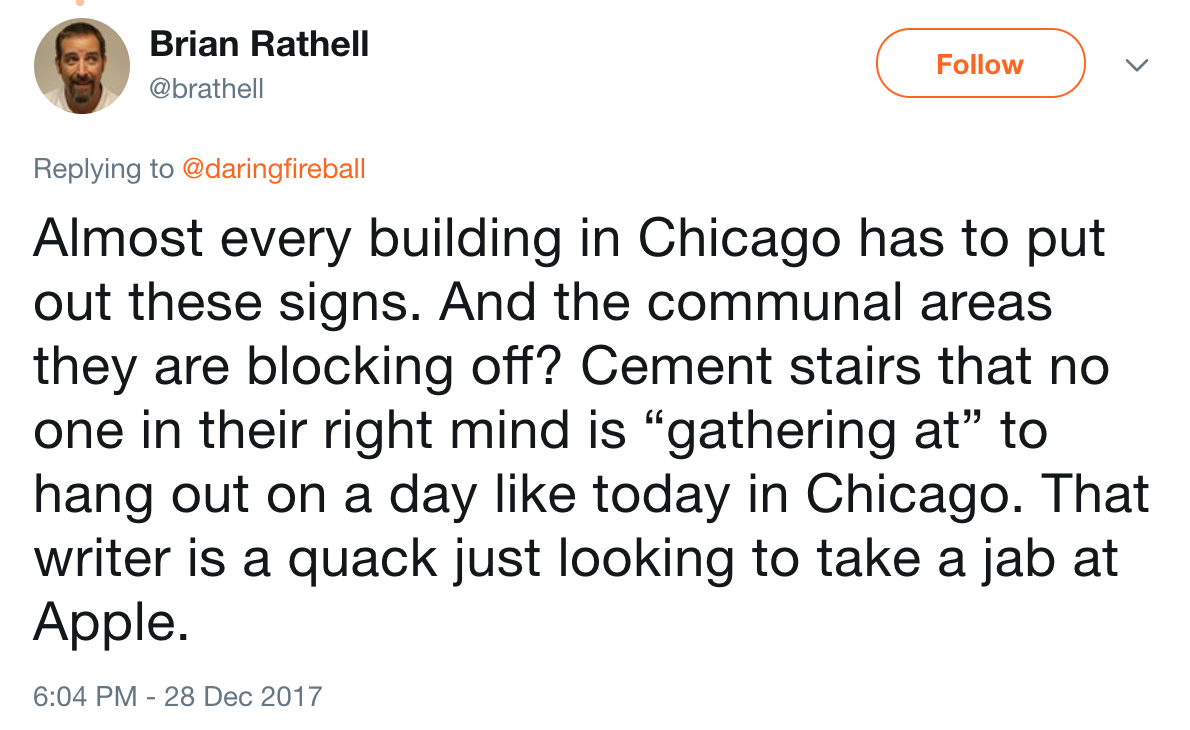 To which I replied:

Yeah, I’m taking a jab at Apple. I think that’s allowed. But really, this is just a fun observation I had during my morning commute. I work in the Tribune Tower next door to this Apple store. I enjoy their outdoor seating area. Granted, in the one-degree weather today, I wasn’t sitting on the stairs. But when I see the stairs were roped off, that was very curious, so this was of personal interest to me. That’s reason one for me blogging about this. Personal interest–which by the way, I photographed the store with my iPhone (an iPhone 5S, that does not have iOS11 installed).

Reason two: Apple brags about the design and functionality of their ultra-thin carbon roof, which now a bit busted, because it forces Apple to rope off areas of their plaza. Many people rightfully pointed out that this happens all over Chicago in the winter. Many downtown buildings put up signs saying “Watch for falling snow and ice.” But not that many rope off large sections of the building. Most buildings put signs. Some may rope off a small area, but not as large as the area Apple was blocking. And it wasn’t even Apple roping off the area, it’s Zeller Realty Group that found the area unsafe. I’m assuming Apple didn’t have the control over these signs and ropes.

Reason three: Well, this one is stated in the blog post. Apple wants this flagship store to be a community area, and now the area is roped off. Just ironic. Yes, nobody is using the space in one-degree weather. But you have to admire the irony that the Apple design is prohibiting their expressed goal with the building.

Reddit user lovethewebs accurately expressed the irony of the open space being closed.

Signs to watch for falling snow and ice are a common fixture in Chicago, as well as cordoned off areas. It’s not just the Apple store that has a problem with this, it’s a regular hazard in the area. In fact, given it’s low height, the Apple Store is probably less dangerous than most buildings. As long as it’s not caving in because of the snow and ice, I think they designed it just fine. No one wants to sit around the outdoor common area when it’s covered in snow and ice anyway.

Good points. We do see these signs all over. However, we don’t really see large areas blocked off.

And very good point about the height. The height of this roof is much much lower than the other buildings downtown.

I would then point out to you that Apple (well, this Apple Store anyway) is more diligent than the rest of the city in protecting the public around their store. The building is new, nobody can predict exactly what is the safe zone around it in this weather.

Thank you Simon! I like that viewpoint. Safety comes first. Apple and the property owners (Zeller Realty Group) are diligent in being safe. I like that. 🙂

However, any properly considered design by an engineer or architect should take this into account during design. They are required to consider all safety aspects, and standard design issues such as drainage. Unless of course the specification from the client asks for something specifically, such as a roof without the encumbrance of ugly gutters. The engineer or architect would still be required to outline the concerns, but the client would have final say.

you’re really working hard to push your article, some people will just disagree, it doesn’t mean they are wrong. These are just opinions.

Hello Noah, it make look like I’m working hard to push my article, since it has gotten all this media coverage. But all I did was mention it on my personal social media accounts (Twitter, Facebook, and Linkedin). I have personally have not initiated any contact with the media. The article has gone somewhat viral, and the media is just noticing what each other are doing.

Personally, I think it’s a great idea! The biggest problem with the Apple Store in my town is that it’s always packed to the gills with other customers. This is a beautiful and clever way to make most of them go away! Maybe I can get a spot at the Genius bar, finally.

Funny and sad… could have been titled “Rich California company has no clue what weather is”. Also, I found some typos:
“Will get by sliding snow” and “design a slopping roof”.

Thank you so much, Chris! I fixed the typos now, thanks to your help.

its not a flaw, its a feature.

Encapsulates Apple’s overarching critical dogma of visual form over function at all costs.

[…] deadly ice daggers have forced the closure of those spaces, as pointed out by local blogger Matt Maldre and reblogged by Daring Fireball’s John Gruber. As Maldre explains, the fancy building design, […]

[…] deadly ice daggers have forced the closure of those spaces, as pointed out by local blogger Matt Maldre and reblogged by Daring Fireball’s John Gruber. As Maldre explains, the fancy building design, […]

Schadenfreude. “Pleasure derived from the misfortunes of others.” I am glad there is not an English word for this; one has to go to the German instead. It’s not a very becoming trait, but boy do folks love to revel in the mistakes of others.

Point very well taken. I do have a sassy negative tone to this blog post. I try to keep things upbeat in my older blog posts. I need to analyze what I have going on in my life now to see what is giving me this sassy point of view.

Not to worry about having to use a German word. English is a Germanic language and there are many cognates; e.g. “braun” and “brown” – same meaning, same pronunciation. English is also famous for adopting words from other languages very freely. My German response to your use of Schadenfreude is “bitte.”

Buildings don’t get built willy nilly. This would have gone through a process at city hall building department, a design review would have been done. They would have been asked what was going to happen, likely they knew that the snow would slide off and closing areas around the roof was the plan all along.
Gutters are never designed to catch or direct snow.

Oh! I didn’t know that about gutters and snow. But I imagine when the snow melts on a roof, that the gutters would catch the majority of the water and funnel it away. We get icicles when there is a leak in the gutter. But with no gutters, we get icicles all over the perimeter of the roof. Correct?

This brings in the discussion of warm roof vs. cold roof. I’m not settling this here. What was Apple’s design intent? Also, mightn’t a gutter with no leak develop an icicle when it’s overburdened with snow which eventually melts – during the day, and freezes at night? Just asking, as it’s a complex challenge.

With gutters, you get frozen gutters through which no water flows, and you’re back to square one… with the added chance of a large metal-and-ice rectangular beam crashing down.

Yeah. It’s fun to point fingers, but the truth is that literally hundreds of people will have been involved with designing and approving this building. Sometimes new ideas don’t quite work out as intended. Surely lessons have been learned all around, and hopefully the problem will be addressed in the future.

For what it’s worth, this is far from the first building I’ve seen with cordoned off areas due to falling ice and snow.