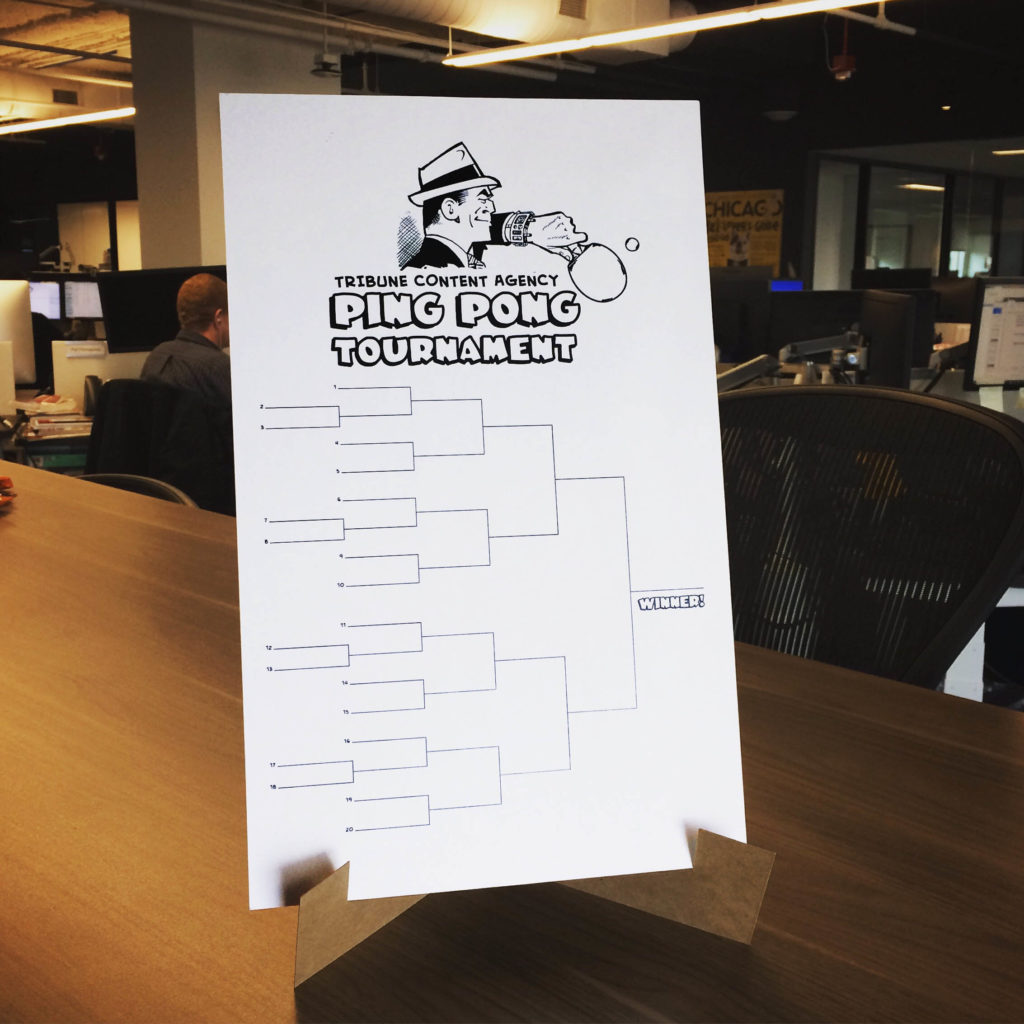 When your company syndicates Dick Tracy, you often get to have some fun at work.

Four months ago we moved out of the Tribune Tower, and into our new office space in One Prudential Plaza. In the recreational part of the building, we have a ping pong table. 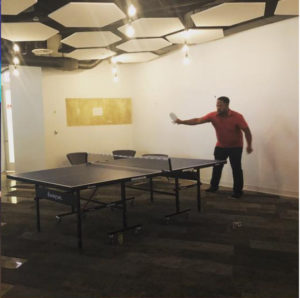 Next week we are holding an company Ping Pong tournament. Our General Manager asked me to make a bracket for the 20 players who signed up. At first I was going to include our company logo to make it all branded. (By the way, I designed this logo in 2013 when we changed our name from Tribune Media Services to Tribune Content Agency.)

But instead of the standard logo, why not incorporate one of our popular comic strips, Dick Tracy? Oh yeah! We syndicate and license the iconic lawman. Right by my desk hangs a drawing of Dick Tracy looking at his 2-way wrist TV. 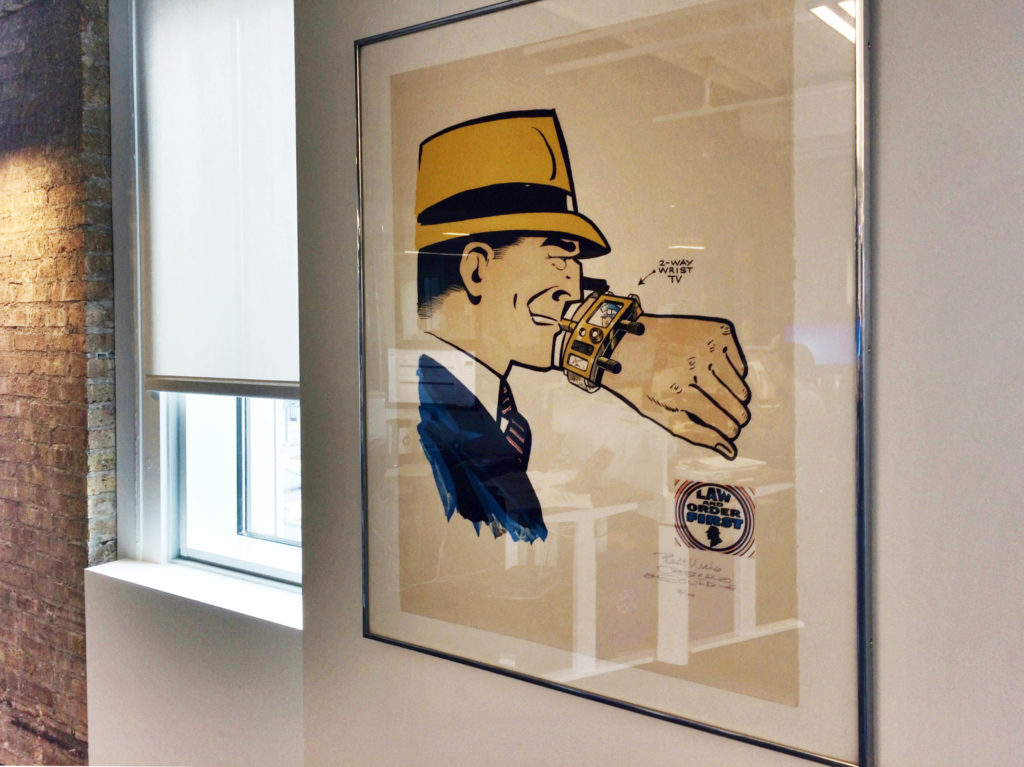 His hand held up would be great for holding a ping pong paddle!

I dove into our art archives to find an image to use that looked like this one (with Dick Tracy holding his hand up). The artwork from the 50th anniversary Dick Tracy logo would work wonderfully! (for those doing the math, the 50th anniversary would have been in 1980). His hand is raised up, and his thumb totally looks like it’s in a good position to hold a ping pong paddle.

Plus, this is already a logo, so I’ll just swap out the text with the tournament text. I actually don’t have the font for the Dick Tracy logo—I don’t think one exists. The text has always been a hand rendering. But dafonts.com has a couple fonts in the spirit of this older Dick Tracy drawing.

But I like the feel of JuneBug better (by Pizzadude).

Now Dick Tracy just needs a ping pong paddle in his hand. We have a subscription to the stock photo and illustration website, Dreamstime. Thankfully they have an image that is hand-drawn. 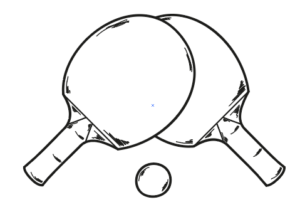 The paddle is not the most perfect position in his hand. Instead of the paddle being completely flat, I would have liked the paddle to be slightly angled. But I had only a short time period to work on this. Besides, in the end result the logo looks handsome atop our bracket.

Now we have a fun bracket sign for the Tribune Content Agency Ping Pong tournament. Let the Ping Pong begin! 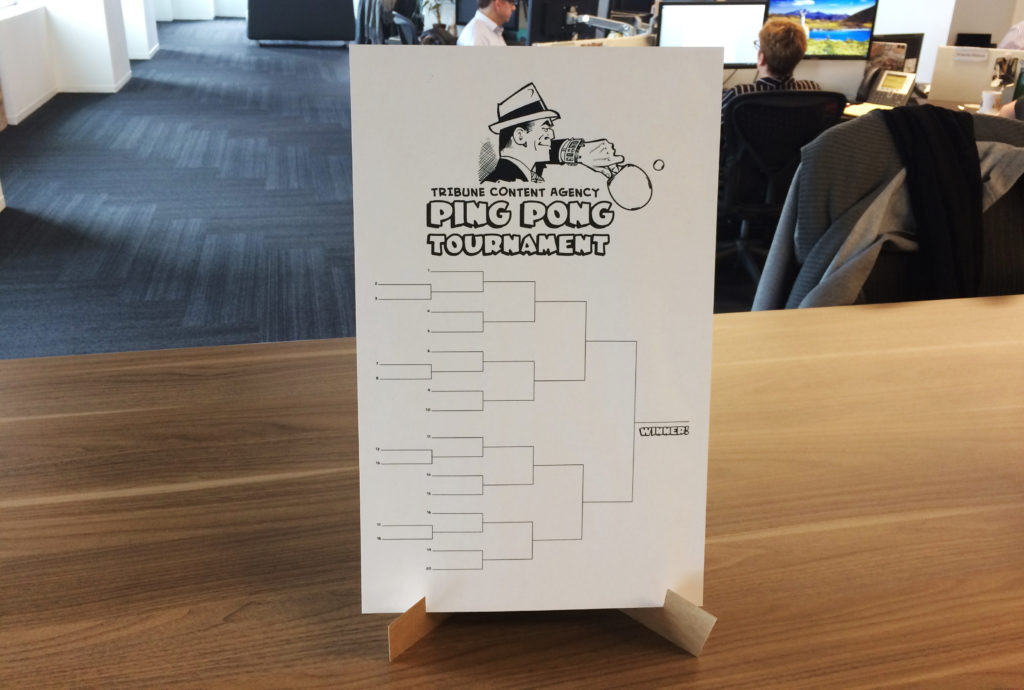 To determine each player’s location on the bracket. We assigned each spot to be a Dick Tracy rogue character. Which rogues made the cut?

Read the blog post: How I narrowed the 200 rogues down to twenty. 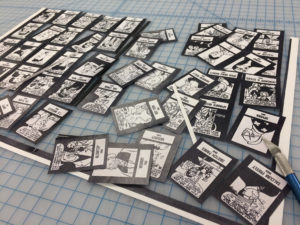