Ever want to have the unrelentless energy of a hyper Ewok? Those little creatures on the Moon of Endor constantly hop around chitter-chattering a million words per minute. Now you can wield the power of the Ewok!

Drink the rare power energy drink of the Ewok tribe of Miwok. The drink comes straight from the SKULL OF AN EWOK.

While Christmas shopping, my twin brother came across this Ewok mug. Naturally, he knew to text a photo of it to me. (I love Ewoks. I play one on Twitter.) 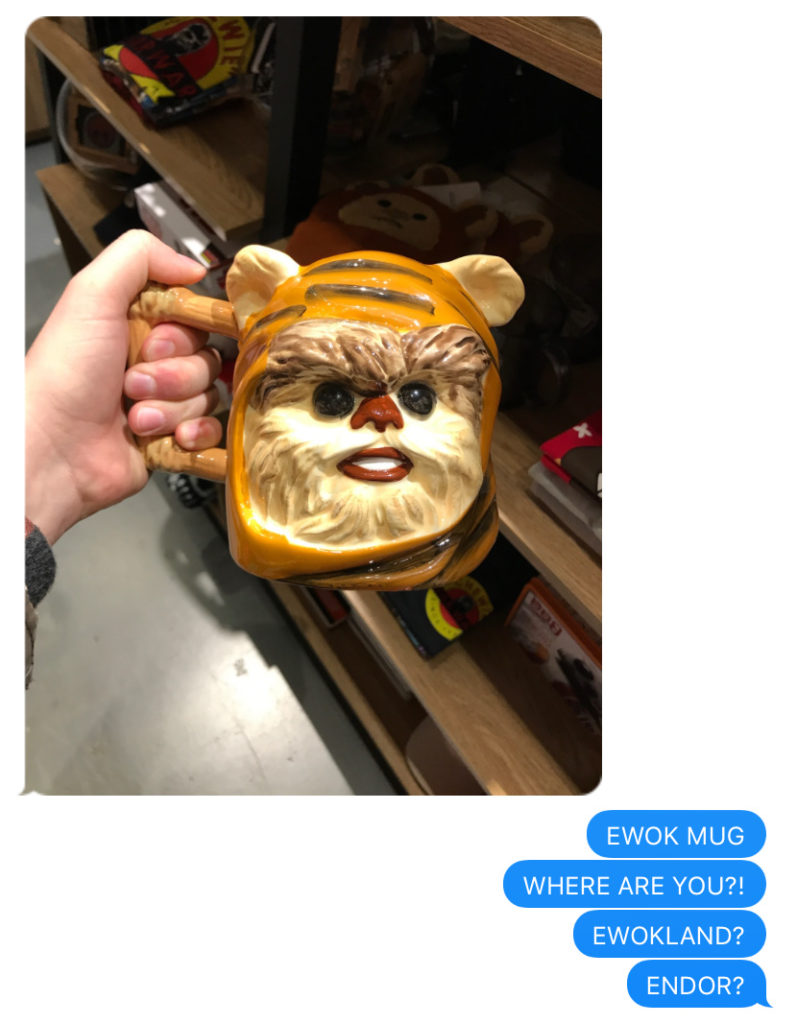 Erik granted my wishes of pure Ewok power. On Christmas day, nice-sized box was handed to me by my 12-year-old niece. She customized the wrapping paper by adding light sabers to the hands of the hedgehogs. 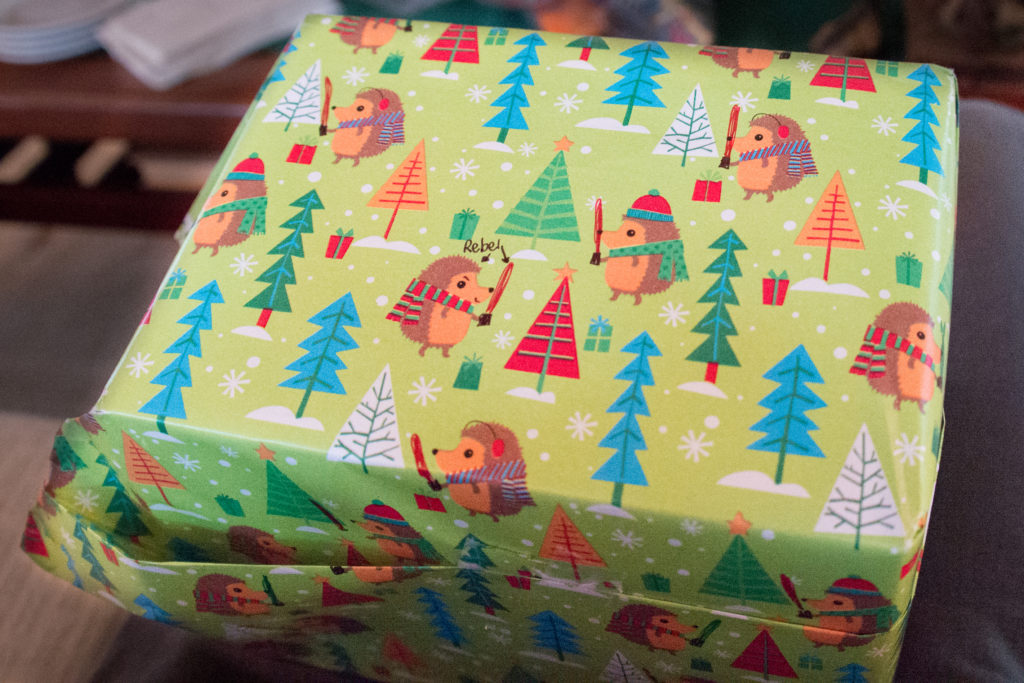 Tearing off the paper with the excitement of an Ewok, inside was the gift of my dreams. A sculpted Ewok head mug! Curious to see the actual mug, I opened the lid on the box and elevated the mug out of the box. IT IS GIANT SIZED. I have never seen a mug this size.

Certainly, this mug holds INCREDIBLE EWOK POWER. Look at the size of it! 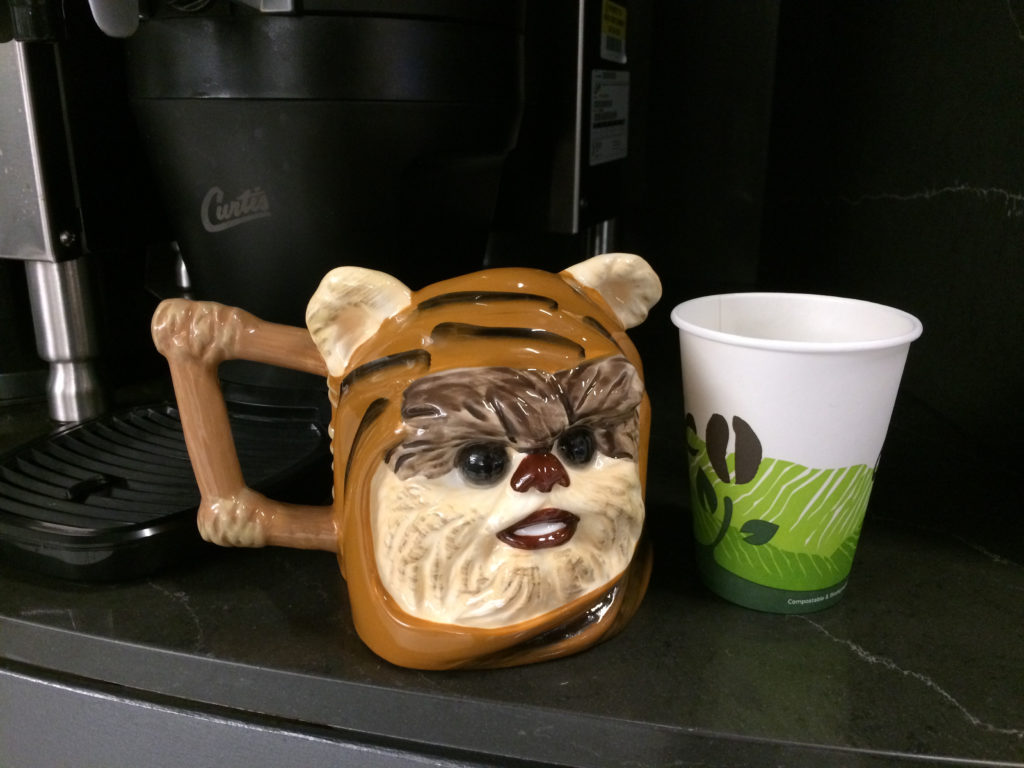 You can fit two of those coffee cups into this Ewok head. Seriously. You can.

Even carrying the mug to work proved to be challenge. The box barely fit inside my backpack. 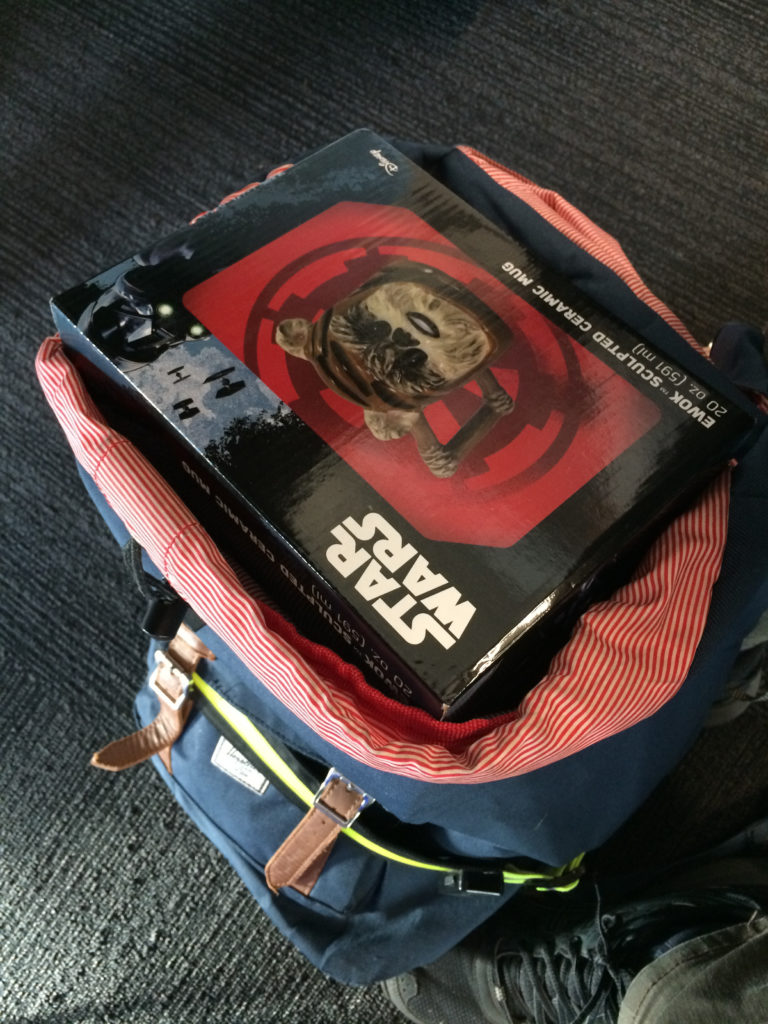 Once at work, I pulled the mug out, knowing that it would draw the attention of my coworkers. In the Tribune Publishing’s new offices, everyone has the same size desk, less than six-feet wide. We all share an intimate space. This Ewok mug would take up, like, half my desk. I clunked the mug down, and poured the entire contents of my large coffee tumbler into the spacious head. 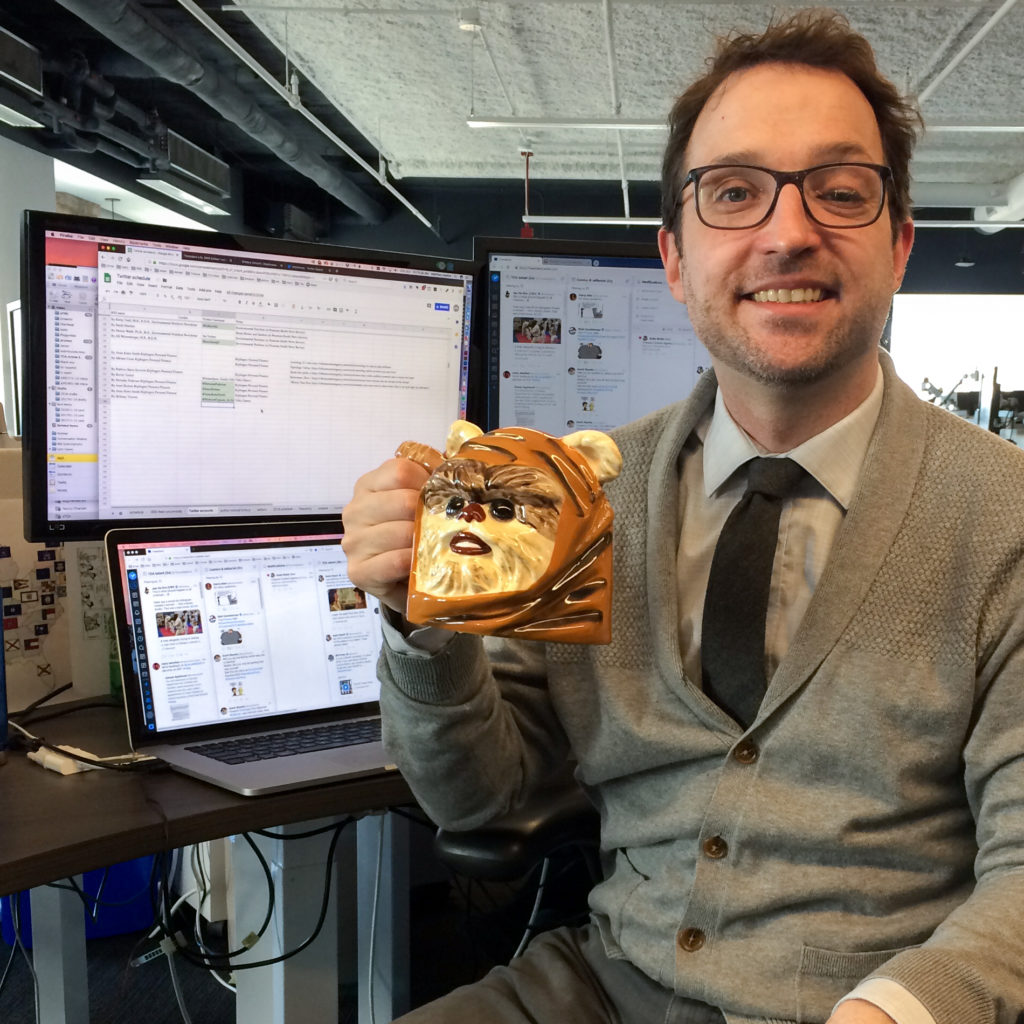 Now the moment of truth. I raised the mug up to my mouth and consumed the Ewok energy power therein. 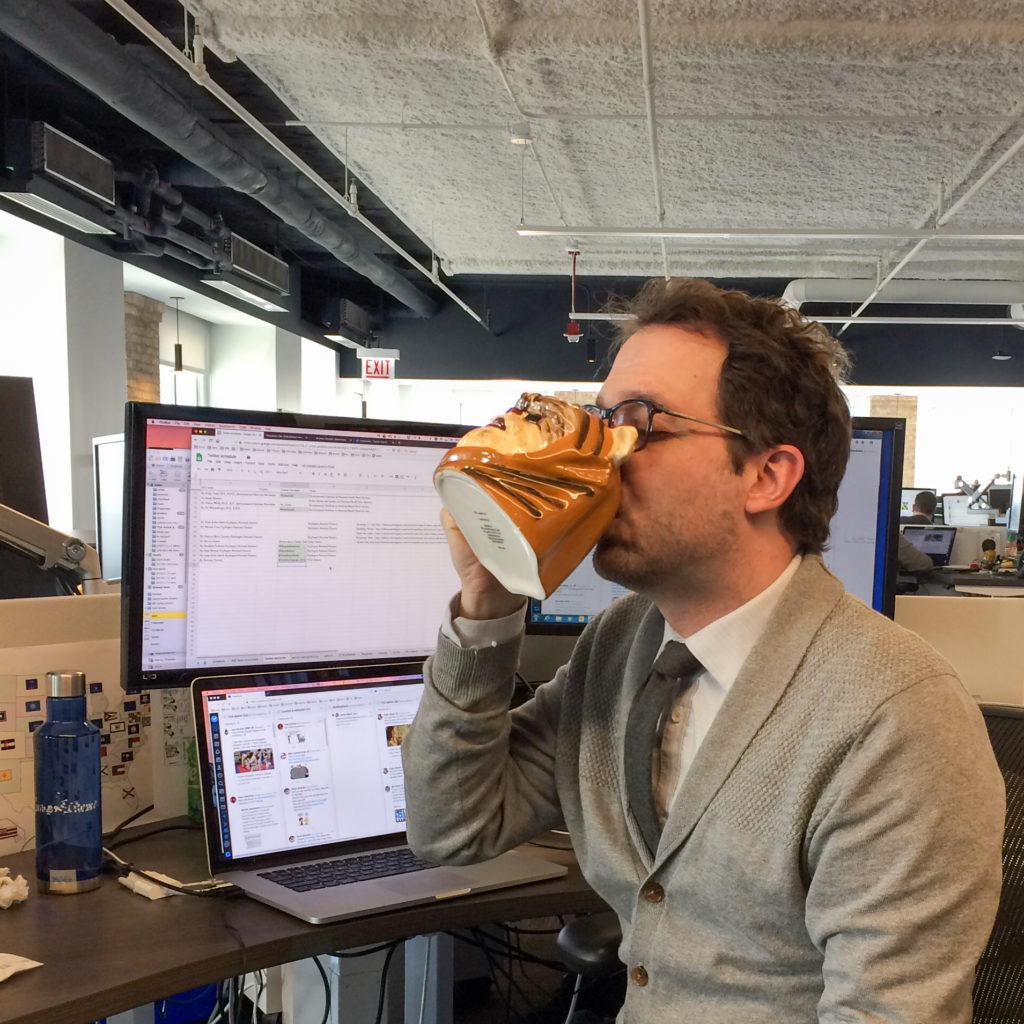 Here’s a photo of the opening of the Ewok mug. It’s also talking with the Chicago Tribune coffee dispenser. 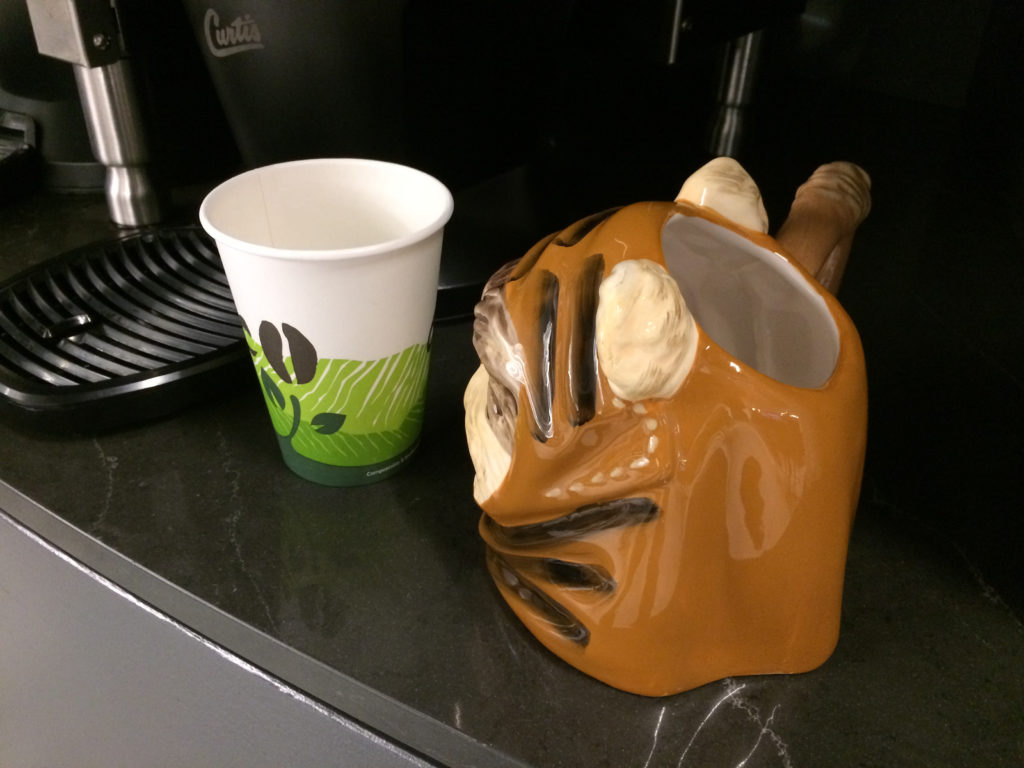 So yeah, this Ewok head doesn’t really work for drinking. Almost like the Ewok energy power is not meant for mere human consumption. Now this mug will be the holder of my pencils, importing awesome Ewok power to my writing and drawing tools. My drawings will never be the same. 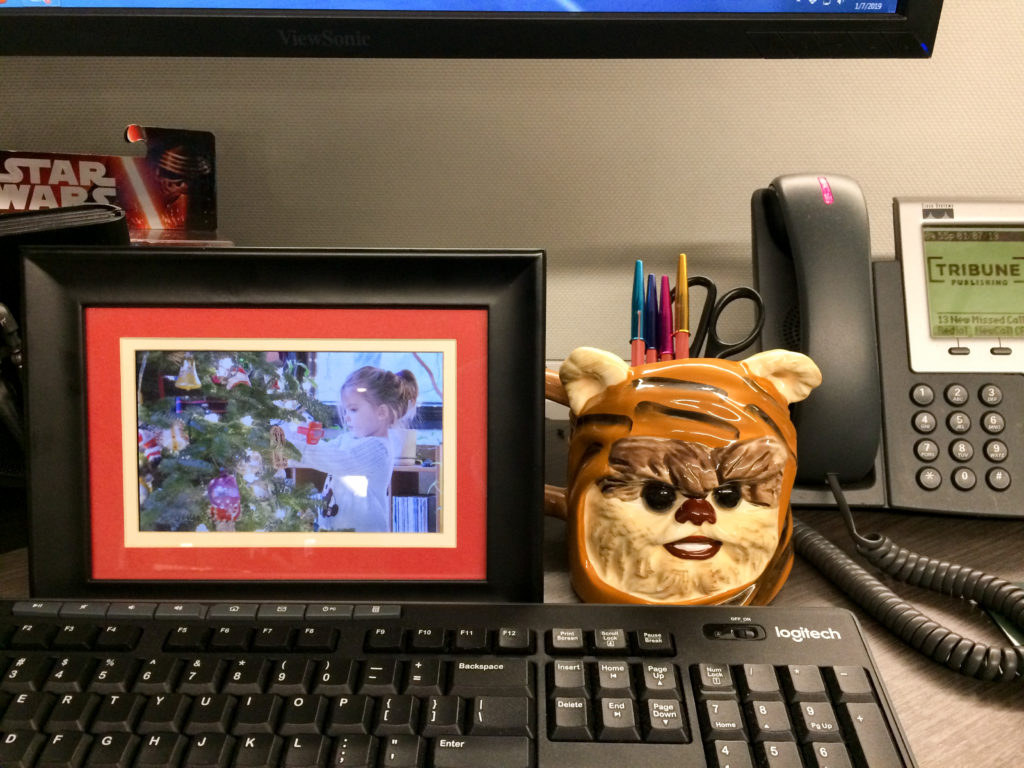 I am tempted by the Boba Fete mug I found on etsy, but so far I have resisted #thesearenotthedrinkingmugswearelookingfor

Where is the bag of candy on your desk with The Ewok!?!