Flickr is imposing a 1,000-photo limit, and drops 1TB storage for free accounts, reports the cnet. SmugMug ends Yahoo’s old policy of a terabyte of free storage. Any free account with over 1,000 photos will have their oldest photos deleted. What?! How did this come about?

Why the sudden change in Flickr’s approach to photography?

April of this year SmugMug bought Flickr. Users were allowed 1TB of free storage. Smugmug promised “that photography will be ‘a priority’ for Flickr going forward”.

Well, six months after purchasing Flickr, SmugMug is screwing over the service they just bought. On February 6, 2019, any free account with over 1,000 photos will have their oldest images deleted to meet the 1,000 limit.

SmugMug is totally missing the point on Flickr’s core value: being an archive.

One of the reasons is the archive. Flickr used to respect all aspects of archives. You can search through the Flickr archives soooo much better than Instagram. I dare even say that Instagram doesn’t even care about their archive of photos. Flickr used to care about archives—until today.

I get it. SmugMug wants to make some money on their investment. The Flickr Free accounts with thousands of photos could be considered a drain on the service. But you know what? This IS Flickr’s unique position. An archive where you can post thousands of photos. That is what makes Flickr unique. That’s how Flickr is managing to retain users.

Instead Flickr/SmugMug is greatly sacrificing the archive of Flickr. This proves that SmugMug doesn’t understand the clear benefit of Flickr—it’s an archive. A wonderful, glorious, deep, rich archive. One that you can search through. Now they are simply THROWING AWAY a large amount of their photos. This makes me soo incredibly sad.

Flickr vice president of product Andrew Stadlen said in a blog post Thursday, “Because storing tens of billions of Flickr members’ photos is staggeringly expensive, we need our most-active members to help us continue investing in Flickr’s stability, growth and innovation.”

If SmugMug didn’t like how Free accounts get 1TB of photos, then they should have not bought Flickr. They knew what they were buying. And now they want to screw over a good percentage of their users.

And you know what Flickr? You are an archive. That’s what you are. By deleting a large amount of photos, Flickr is greatly hurting the internet. With this announcement, the internet just got to be a worse place. If it sounds like I’m being dramatic, yes, I am. I am greatly saddened by Flickr’s choice to delete an archive.

Free accounts that over the 1,000 photo limit will have their photos deleted on February 5, 2019. This makes me want to go out and tell all my friends who have over 1000 photos on Flickr to quickly archive them.

What sort of message does SmugMug thinks this will send out?

This is NOT a good PR move. Flickr’s image is already suffering. People have dropped Flickr in swarms for Instagram. A fraction of the people use the service now. It’s forgotten. Flickr needs to do something to get people’s attention to use the service.

Instead, SmugMug is doing the opposite. Now people will only think of Flickr as the place that deletes photos.

Is that the branding you want? “Here, come join our service. But oh, we will delete all your photos. That’s what we do.”

Maybe SmugMug is confused. Maybe they thought they bought Snapchat where images disappear after 24 hours.

A money business. Not a photo business. They are clearly prioritizing money over photos and photographers.

SmugMug didn’t even wait a year to do this. SmugMug bought Flickr in April 2018. This announcement comes six months after they bought Flickr. Six months. Almost like they timed it. “Oh, let’s wait six months until we screw people over.”

My faith in online platforms is lost

I have championed Flickr relentlessly over the years. It was the clearly superior service to Instagram. And now sadly Flickr is hugely failing me and the photo community. Flickr was a safe place. A place where you can put your photos, and know they are safe. Now Flickr is no longer safe. No online platform is safe.

I’m at the point where I just want to start posting all my photos on my own website. Where I know my photos will be safe. I’ll continue to use online platforms like Flickr and Instagram. But I don’t think I’ll be linking to their sites anymore. I don’t want to give them my promotional energy. Especially if what they give in return is deleting users’ photos.

(Photo by Jilbert Ebrahimi on Unsplash. Photo edited by me)

I’m starting to come around to SmugMug’s rationale. 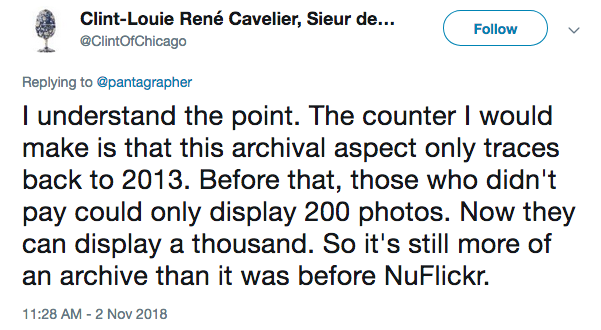 What a great point! I’m trying get myself to be more positive about this change. This helps me. The more I think about his point… At first I was upset that SmugMug did this so soon after buying Flickr. But if they waited longer to implement this, that would mean more photos deleted.

Thank you. (Although I’m still not quite happy about this change, but I’m making progress.)

I don’t know the economics of hosting a bajillion photos. But certainly Google has found out that they like to host photos, because more photos means more data to mine. Too bad SmugMug hasn’t figured out how Google does it.

I almost was about to say that too bad Google didn’t buy Flickr. But then Google would likely just kill it off randomly one day.

I’m going to try really hard to see the positive in this. Smugmug is trying to improve Flickr, right? Oh man. This is going to take some time for me to heal from this. But I will try to heal and get positive over this.