Seriously. I saw a robin the other day on the ground. Instead of running, I believe it was hopping. I snapped a few photos, but robins do not like their photo taken! He was being very elusive. Which in some ways served the purpose of what I was doing—trying to document how they run—or hop. (photos coming).

I’m now left wondering—do robins run or hop? This still sits on my to-do list to research. Or maybe someone can comment with the answer. 🙂

Yesterday we had a light dusting of snow in Chicago. Certainly not enough to shovel—or even build a snowman—so I thought. Someone managed to build a tiny snowman on the Chicago Riverwalk. This little guy was left on a bench overlooking the river. 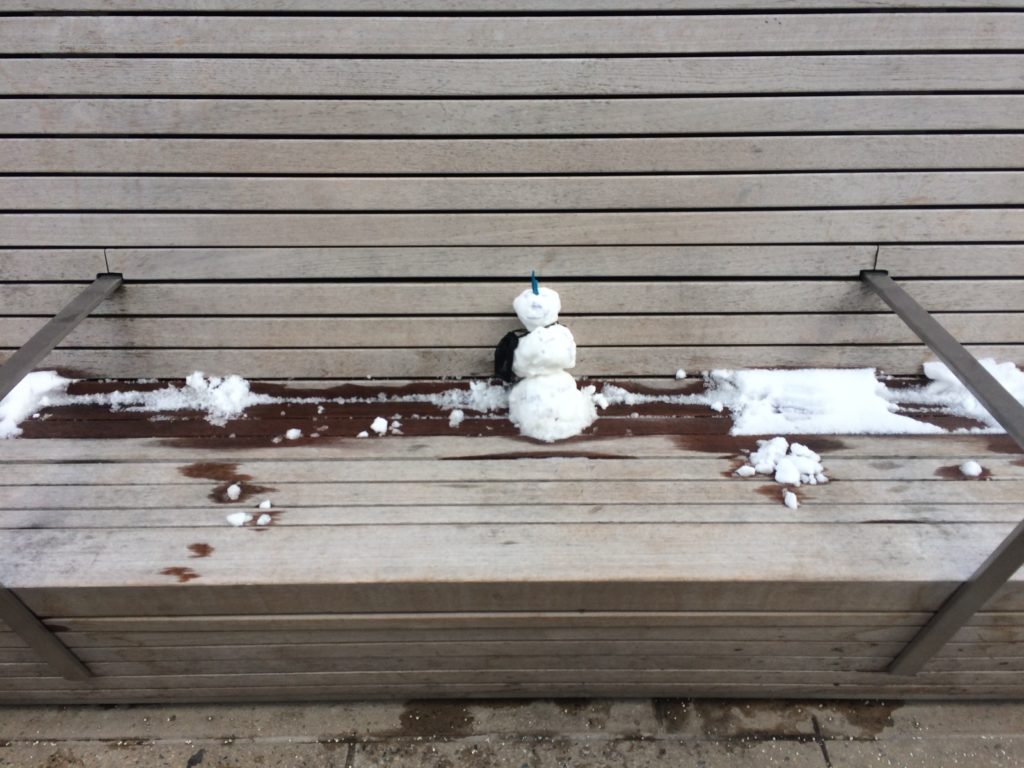 Whenever it snows, my 23-month-old daughter Julia loves to say, “Snowman! Snowman come!” She loves snowmen. This April morning with a light dusting of snow on the ground, Julia exclaimed, “Snowman!” Even though we are way past the time of the year for snowmen to occur, she still has the excitement for Frosty appearing around the corner.

Around the corner, he did appear. As I’m walking down the Riverwalk, much to my surprise, a mini Frosty appeared sitting on a bench! Why, hello snowman! I snapped a couple photos to show to Julia. She will love it. I simply must share this delight of seeing Frosty actually appearing in April! 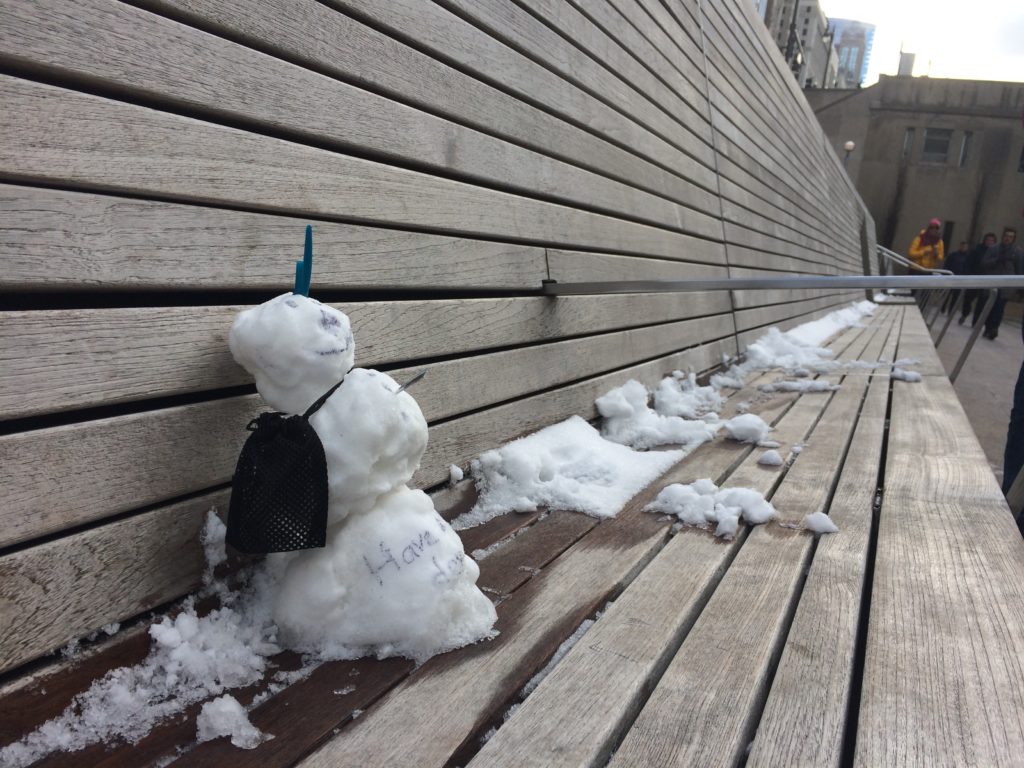 With Julia being as young as she is, we try to limit the amount of screentime she gets. I could show her the photo on my iPhone. However, once you show a 23-month-old one photo on an iPhone, they will want to see more on that magical glowscreen.

Instead of using my iPhone, I plan on printing out the photo and showing Julia the print. 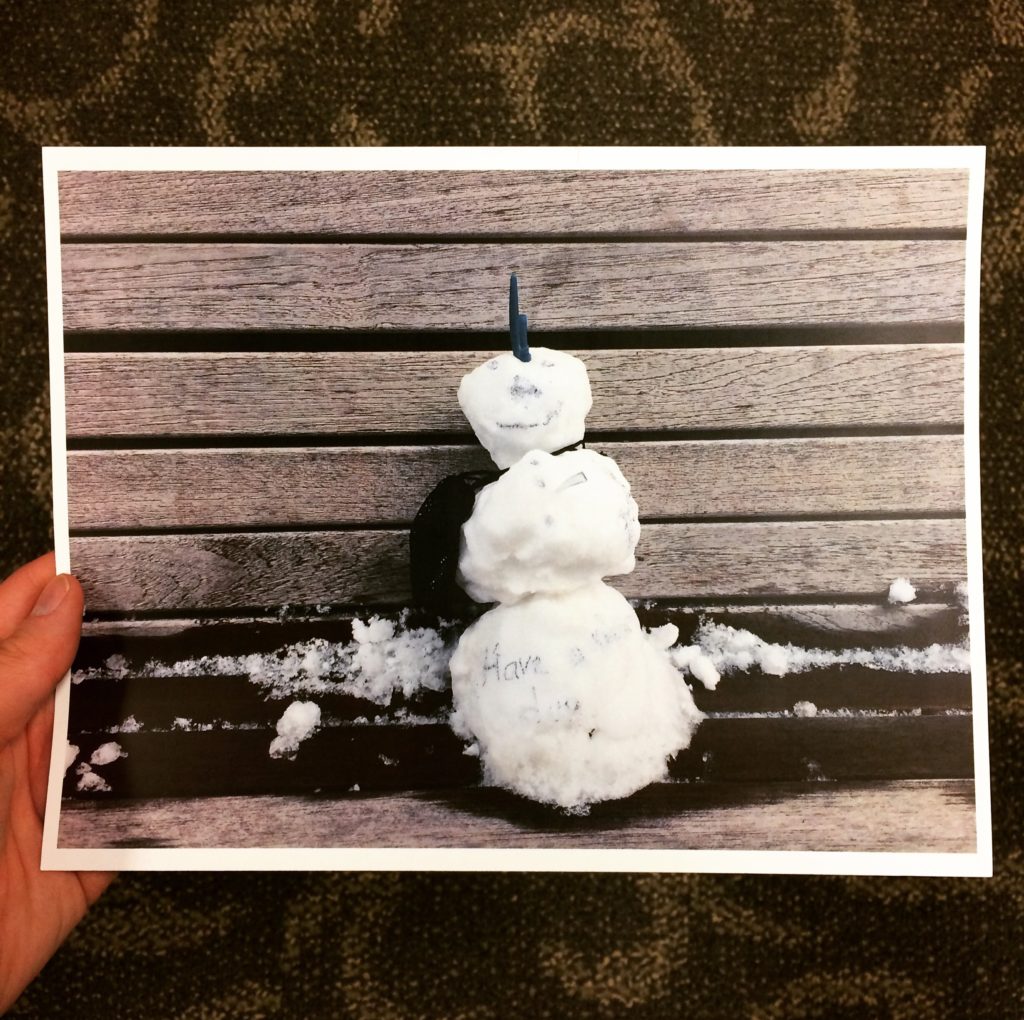 Then the print will become a part of my new Daily Letter art project, where I write one fun letter every day to someone different. I’ll write the story of seeing the April snowman on the back of this print, and mail it to a friend who might appreciate the story.

So that’s a couple fun items on my to-do list. Our to-do lists can become a drudgery most times. I like to lighten mine up with little nuggets of fun.

What is written on the snowman? I see a “Have a…” And he has a CAPE? How cool is that!

I couldn’t quite decipher all the words it says something like, “Have a _____ day” His cape is indeed very sharp. I like the pen cap as a hat. (Or maybe the pen cap makes him a unicorn)