I love the Goodreader app. I use it read PDFs and to take notes on PDFs. I’ve tried other PDF reader apps, and this is by far the best one. You can hand-write notes directly onto the PDF. You can add typed notes onto the PDF. It syncs with many services, including the popular Dropbox.

Below are the instructions on how to sync your Goodreader iPad app with your Dropbox account.

If you already have a Dropbox account, you can skip to “2. Set up PDF folders in Dropbox”

If you don’t have a Dropbox account, please use this link to create a free dropbox account: http://db.tt/6BqJKDaa.

If you use this link, I will get extra space on my Dropbox. I will really appreciate it!

Dropbox will create a folder on your computer. Anything you put inside this folder will automatically sync with the cloud on Dropbox. So let’s say you have a Dropbox folder on your computer at work. Inside this folder you can put all sorts of documents and other folders. Let’s say you have a folder named “photos” inside the “Dropbox” folder. That entire “photos” folder will sync up with the cloud. Really handy!

2. Set up PDF folders in Dropbox

We are going to make folders in Dropbox for PDFs. These folders will sync to your Goodreader app.

There are two ways of structuring this.

Here’s how I have mine structured: 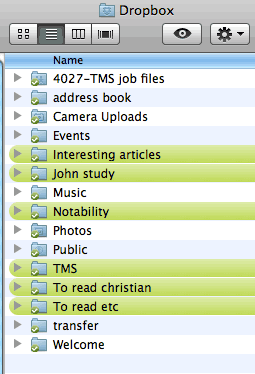 Goodreader is available for both the iPad and iPhone. They are separate apps, each $4.99. But so well worth it to have both.

Buy Goodreader for the iPad

Buy Goodreader for the iPhone

My tutorial below is for the iPad app.

4. Add your Dropbox server to Goodreader

In the “Connect to Servers” section on the right, tap “Add”

You will now have your Dropbox set up under the “Connect to Servers” section. Tap on “Jed’s Dropbox” and a window from Dropbox.com will pop up asking you to authenticate with your Dropbox username and password.

5. Pick which folders in your dropbox to sync

Tap on “Jed’s Dropbox” in your “Connect to Servers” section. You’ll see your list of folders in your Dropbox. We’ll add one folder at a time.

Instead of tapping on the arrow by the Dropbox folder you want to tap on the name. Let’s say you are going to sync the folder on your Dropbox called “Articles to read.” Once you tap on the folder name, it will be highlighted in green. Then tap on the “Download” button at the bottom.

The next window that appears will show your folder structure in Goodreader. You want to put your folder at the base level, so just tap “Download folder here”

The window for the Goodreader folder structure will disappear and now you can click “close” on your Dropbox window.

You’ll see that your “Articles to read” folder is now in your Goodreader.

Repeat this process for every folder you would like to sync with your Dropbox to Goodreader. 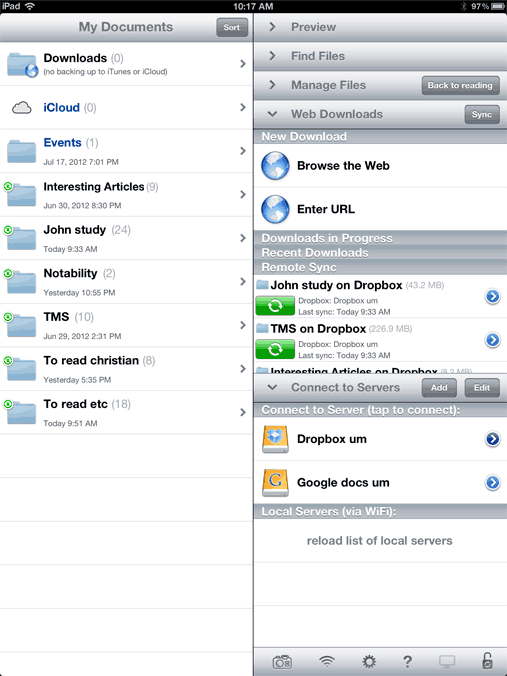 Everytime I use Goodreader, I sync my Goodreader app with Dropbox. To perform this sync, go to the “Web Downloads” section on the right. Click “Sync” This will sync all your folders and documents. 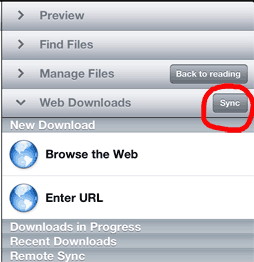 I love GoodReader. I use it almost every day.

Chris, one of the really cool things about syncing folders with Goodreader is that once you set up one folder to sync, all the subfolders will automatically sync. You can even delete and make new folders at any time and they will sync up perfectly.

Thankyou for a really useful post. Just one question, if you don’t mind? Some of the Dropbox folders I would like to sync with the iPad have sub-folders inside them. Can Goodreader support this, or would I have to manually download and set up a sync for every sub-folder individually? Thankyou in advance! Chris.