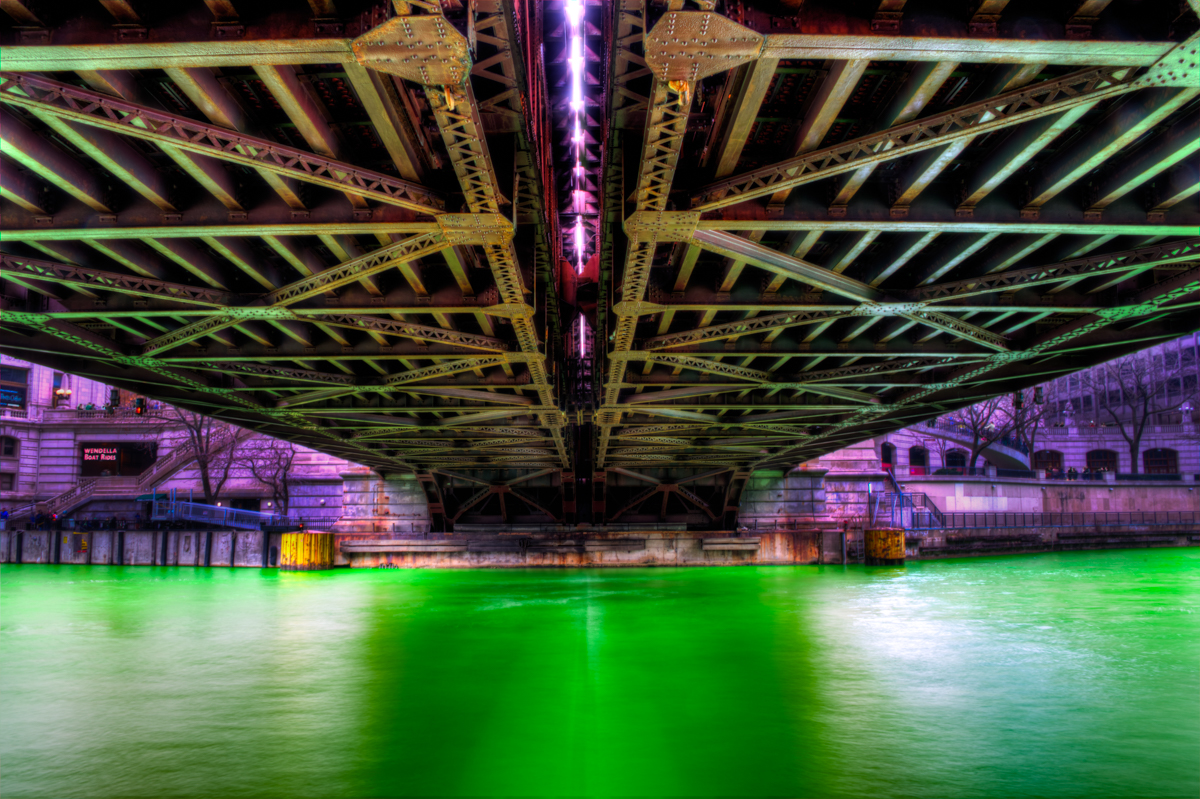 While walking along the Chicago Riverwalk with my wife, the river had just been dyed green hours earlier for the annual St. Patrick’s Day festival. The river has a surreal green glow that could be seen in the metal under the bridge. Knowing that HDR photos bring out the the slightest bit of color, I knew that the green under the bridge would be captured. What I didn’t foresee was the purple tones in the background. The intense green forces the background into a purple tone.

I’m assuming the purple is created by red mixing with blue. The blue is coming from the natural color of light in the sky. The red comes from the opposite of green. The camera sees such intense greens, that it tries to compensate for this huge hit of green by making the rest of the photo have a slighter red hue. Take the red compensation and mix it with the nature blue we see in the atmosphere, and thus you get purple. I don’t know if this color theory is correct–it’s just my guess for why the purple shows up.

Also in the background, on the left is the Wendella boat rides–just a nice little detail. Even the yellow river bumpers give a bit of nice color on either side of the bridge. Just to the right of the bridge is where the river is dyed, so the green in the Chicago River turns really intense at the Michigan Avenue. Plus, the HDR really brings out the green color in the river. 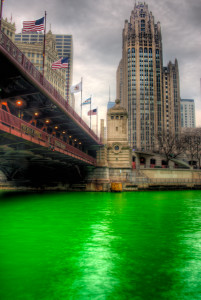 This HDR photo is composed of six different exposures, each shot at a different shutter speed, ranging from very long exposures to make a light photo, to very short exposures to create a dark photo:

Check out the bottom half of the exposures, you have a dark bridge. The end resulting HDR photo doesn’t appear dark, because the HDR photo brings out the lighter tones. The darkness under the bridge forces the light in the background to be that much more intense. So I’m guessing this more intense light pushes the blues and reds.

This massive double-leaf, double-deck bridge is constructed with a split down the middle between the two directions of traffic. Walking under the bridge, you can definitely see bright light shining between these two sections. Especially cool here in the photo is how that light is a purple light. You can also see how the light falls down onto the river.

With the longer exposures of an HDR photo shot at f22, the river gets a smooth ice-like look. It’s so wonderful that Chicago continues this 55-year tradition.