Simplicity. Something covers of magazines today often lack. Multiple headlines cry for your attention alongside a primary photo. Editors hope one of the headlines will grab your attention while standing in line. You don’t have to pick up the magazine to see its contents.

We’ve all gotten used to the shouting matches on magazine covers. But take a look at the simple magazine covers produced by Beckett in the late 1980s and early 1990s. All they feature is the name of the magazine and a photo of one baseball player. Perhaps a card of that player might be featured as well. Simple. 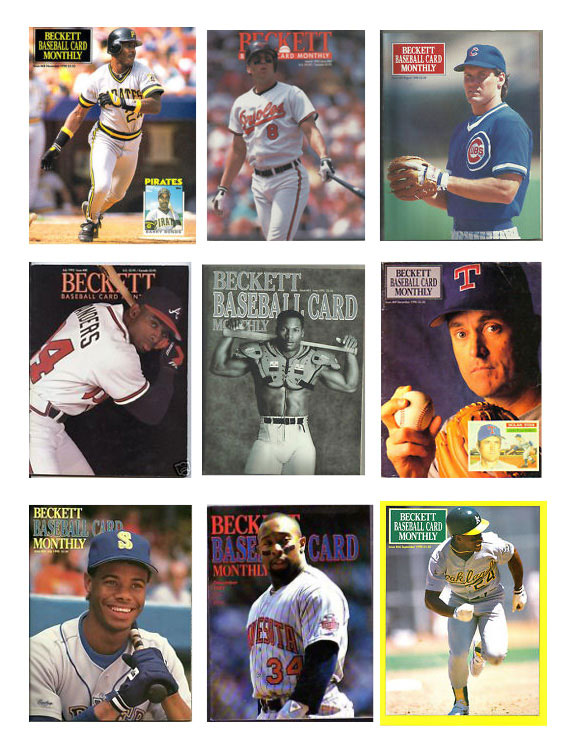 Growing up with these baseball card magazines, I would get excited when one of MY players graced the cover. If your player made the cover, it influenced card collectors everywhere that player is worth collecting. Now 20 years later, I realize these covers influenced more than my selection of whom to collect. The simplicity of these covers influenced me as designer today. I’m glad I was able to grow up adoring clean simple designs.

Thank you Beckett for being an influence in my design career. However, I’m greatly disappointed with the covers of the Beckett magazines of today. They suffer from cramming in tons of information. Odd, because Beckett isn’t sold at the newsstand where readers need to see the contents of the magazine before picking it up. 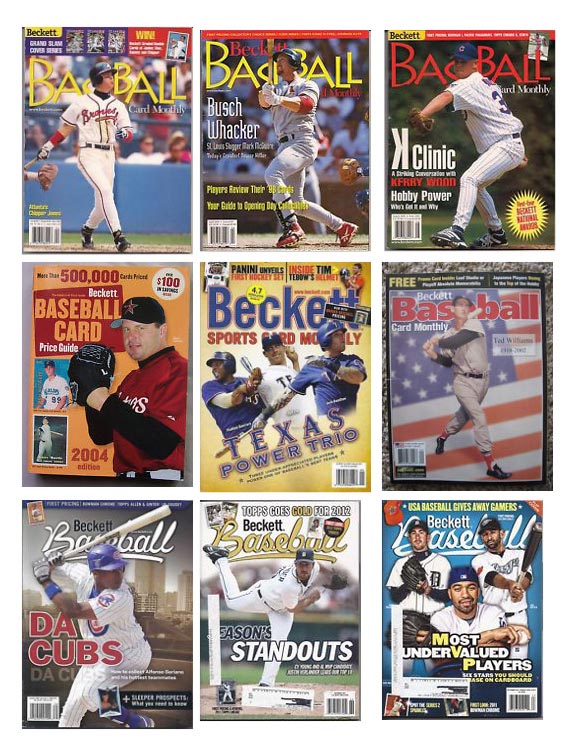 It seems Beckett acknowledges that it’s harder for kids to collect today’s expensive cards with packs costing at least four dollars each. To reach out to the younger demographic, they try making the magazines less sophisticated and more “kid-friendly.” What we end up with is a garbage-designed cover that looks like all the other magazines in the world. Nobody likes to see multiple headlines farted all over a photo. Just because that’s a “magazine look” doesn’t mean that it’s a good design.

Beckett should go back to their tradition of stoic magazine covers that inspire the awe of both children and adults.

I especially find the masthead from the top row of the top image to be really awful. The variable baseline of the different sized letters is just screaming out, HEY WE WANT KIDS TO READ THIS. It’s way too obvious.

I couldn’t agree with you more. The cover approaches of then and now also reflect the design of baseball cards. Generally speaking, baseball card design before 1992-ish was very simple. Compare that to cards from 1993-ish and beyond and it’s like a rainbow puking all over the place.

There’s a clarity and elegance to the Beckett of old. The Beckett of today is cluttered and confused. It’s a rather proper reflection of the baseball card industry.

An editor of Beckett Magazines, Chris Olds often blogs for Beckett. He recently posted a poll asking for people to vote for their favorite 2012 Beckett Magazine cover. I couldn’t vote in the poll, because I didn’t like any of the designs in light of the clean designs of the late 80s and early 90s. Here’s my comment on his blog post at:http://www.beckett.com/…/beckett-sports-card-monthly…/
——————
As a graphic designer, I can appreciate Beckett’s approach to make your magazines look like they hold great editorial appeal. Which they do, there are many great editorial pieces and series done with Beckett’s monthly magazines.

However, when it comes to the covers, I still hold favor to the extremely clean style done for the covers of the late 80s and early 90s of Beckett Baseball Monthly. These covers didn’t have to scream “we have editorial inside!” Instead, these clean covers functioned much like a single baseball card. A photo and a title. Just as baseball cards are desirable enough with those simple elements, I appreciate how Beckett’s magazine covers had enough confidence to make such a simple statement every month.

Another way to think about this is with storefront window displays. The best displays are ones that keep it very very simple. You know a store isn’t doing good business when they start to put more items in the front window. By cluttering up the front window with multiple messages, the store owner is saying, “Nobody is coming into my store to look at these things, I gotta put them all in the front window!”

I would plead to Beckett that you remain confident in your great editorial and that people will pick up your magazines, because we know what’s great inside. There isn’t a need to clutter up the fronts of the magazine to make it look like every other magazine on the market. Your simple designs of the late 80s and 90s distinguished your brand from every other magazine on the market. I would hope you would return back to this distinguishing, confident, elegant, collectible method.
——————