1. Keep ALL your blog drafts in one place.

You might have ideas on scraps of paper. Or in various email drafts. Put ’em all together. I suggest Evernote as it can capture text and images. (sign up for Evernote–this is my special referral link).

Wrote an idea down? You can photograph and upload it to Evernote, and the image will have text recognition, so later on you can search for this photo.

Keeping all your drafts in one spit will give you a well to dip back into. Even if I have just a kernel of a thought, I make an Evernote note with it. You’ll find that it will start to build up over the years. I’m currently sitting on 901 unpublished blog drafts.

The majority of my ideas from two sources:

3. Prune your reading list to what actually inspires you to create

There are two categories of things you read.

What’s the difference between the two?

Things that I read that make me create are reading friend’s blog posts. Because I know I can go down the journey of reading a friend’s blog post and comment. The friend will comment back. And then we have a dialogue that will spark new ideas. The trick really is engagement. You want to engage with the work where you develop dialogue.

Twitter has huge potential to develop dialogue, but I find that normally this does happen on Twitter. Reply to someone’s tweet and you might–MIGHT–get a reply-back. Most times you’ll get the little star–now a heart. That little heart icon is not going to spark new ideas. Twitter is for entertainment. Not for inspiring new content creation. Even if you do get a conversation going on Twitter, the limitation of 140 characters isn’t going to develop any sort of long-form thought. Twitter is quite limited.

Instead find inspiration in an RSS reader. You can add a wide-variety of sources that inspire thought. The beautiful thing is that once you mark an item as read, you never have to see it again. RSS readers give you a constant influx of content. You might ask, “well doesn’t Twitter offer a constant stream of content?” Yes, but Twitter is incredibly noisy. For the most part, people write garbage tweets. What you want is insight. Insight from sources you know you can trust.

Start collecting website feeds into feedly. Make sure the sites you add are ones that you WANT to comment on. Not sites that you just scroll through. But sites that actually make you want to say something about what you are reading. For me, that means I need to make sure that the author cares about my comment. If the author doesn’t care about me, then I am more likely to not want to spend my time on their content.

Yeah, that’s really harsh. And I do struggle with it. While I love Seth Godin’s writing, I don’t read his blog, because he doesn’t engage with his comments.

Besides, why do you write a blog? I bet a large part of the reason is so that people read your work and interact with you about it. By having a home for your writing, you are giving people the opportunity to engage with you, just as you are engaging with them on their blogs.

An idea pops into your head! It’s so tempting to quickly tweet it out and get that quick rush. At the moment you might not have the time to write a full blog post, so why not test the waters and see what people think of your idea on Twitter? In the past couple years I’ve fallen into this trap. 99 out of 100 times, you know what happens to those ideas that get the quick tweet? Nothing. I know I’m sounding like a Twitter-hater here, but bear with me. Twitter is a stream. Once you tweet something it’s out there for a few minutes, and then it’s buried under the avalanche of other people’s tweets.

You might think that you’ll go back to your tweets and pick out the great ideas for blog posts. I think the same thing, and I never do it. Why? Twitter is a off-the-moment stream. It’s not a place to collect your ideas. Just the thought of having to wade through thousands of your old tweets doesn’t sound appetizing, does it? And those are YOUR OWN tweets. Put your new ideas where they belong, in Evernote. You’ll go back to Evernote much more often than you do your old tweets.

And if you do really want to “test the audience” to see how an idea resonates, sure, go ahead. But make sure to capture the idea in a place where you’ll actually go back and read it. Just be warned, the allure of sharing this great idea will wear off when you’ve already published it on Twitter. And especially if the idea gets zero attention. You’ll think the idea wasn’t so great after all. That’s a shame, because Twitter is a noise engine. You shouldn’t be judging your ideas based on a bunch of noise.

This one is actually hard for me to write about, because not to brag, but I don’t see how people are not curious. People often ask me how I’m so curious about things. Aren’t all people curious about everything? I need to learn why people aren’t curious. I’m betting a large part of it is fear. A recent Freakonomics podcast episode covered the topic of being bored. Most people are afraid of quiet time, because their mind will drift over into anxiety. And what is anxiety? It’s letting your mind travel over into fear. Why let your mind get all worried about things, when you can let your mind explore the wonders of this world. Even the super-simple things could yield such possibilities.

Lately I’ve been contemplating sidewalk cracks. They totally look like lines from a drawing. They look like rivers. They could be design elements. Where do sidewalk cracks occur? Do they tend to be perpendicular to the street, or parallel? Are there plants growing up from the cracks? Are there any creatures that live inside these cracks? There’s so much to wonder about! Wonder leads to blog posts. 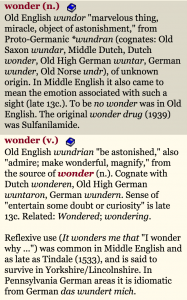 Wonder is something that starts from outside of you. Wonder the noun comes from the Old English wundor “marvelous thing, miracle, object of astonishment,”

These marvelous things are in the eye of the beholder. Even if we encounter something marvelous, we might not see it as such if we are in a negative mood. Therefore, we also need to be the verb wonder. Wonder the verb comes from Old English wundrian “be astonished,” also “admire; make wonderful, magnify,”

For when we magnify something, we are expressing wonder.

I’ve said before that the concrete steps to happiness is thankfulness. Happiness isn’t something we can chase after. It’s too elusive. Thankfulness is the real concrete thing we can do. The same can be said of wonder. How does one have wonder?

This attitude of wonder comes from an attitude of appreciation, where we highly value what’s around us. Not from devaluing everything. The opposite of thanks, according to thesauraus.com, is condemnation and disapproval. We can go around poo-poo’ing on everything. Or we can walk around being thankful.

When we negatively criticize things, we make them smaller so we can hold them in our hand and thus think we have control over this thing. But when we praise something, we make it bigger and admire it. The thing is magnified and we have wonder. That’s wonder.

Wonder is tied to curiosity. For when we see something wonderful, we can’t help but be curious about it.

Find what inspires you, be open to inspiration, share it with others.

Also, make sure you publish your drafts. I fall victim to exploring around too much, and not publishing enough. I was able to build up a large number of blog drafts, because many of them haven’t been published yet. But I suppose having 3,000 published blog posts against the 900 unpublished drafts isn’t too bad of a ratio, is it?

[…] Discover the details behind each of these six tips at How I built up 901 unpublished blog drafts. […]

I should also say that it’s still important to consume things that you enjoy. Like comic books, because the influence the way you think. Everything you consume shouldn’t be something that ends up being literally productive.

Also, a few years ago I wrote a little bit about 3 keys to doing something with what we consume.

Thanks to an a blog post from 2012, I was able to determine how many of my blog drafts get published.

30% of my blog drafts get published.