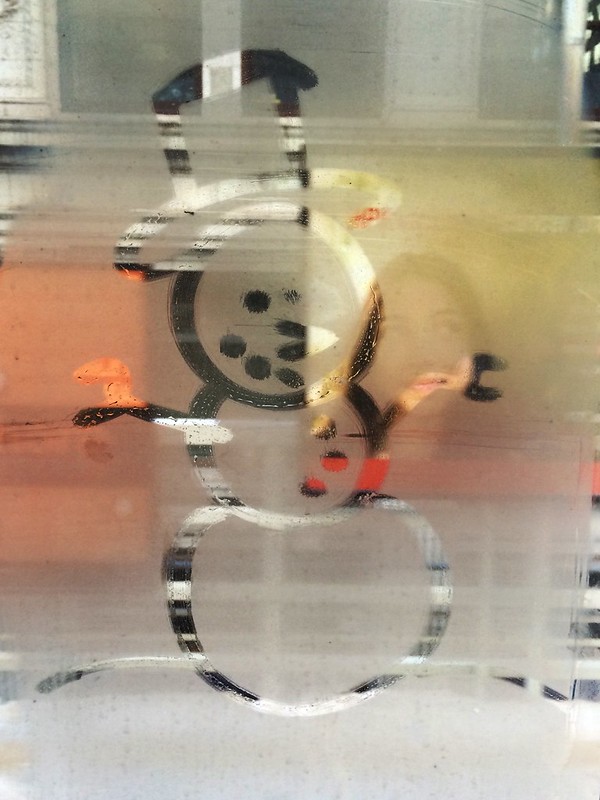 Time is short. People are watching you. Will you have the guts to draw something fun on a foggy window on the bus or train? These questions faced me this morning as with below zero degree temperatures in Chicago.

Commuters pack the train on their first day back to work after the Christmas holiday. All bundled up, I hobble over to the door where the window is completely fogged over. Even though my stop is coming up next in a matter of seconds, I draw out a fun snowman on the door. The train must had been going slow, because I was even able to take about ten photos of the snow man. My favorite photo of the ten is shown above.

Here are seven tips for drawing cartoons on the window on a bus or train. 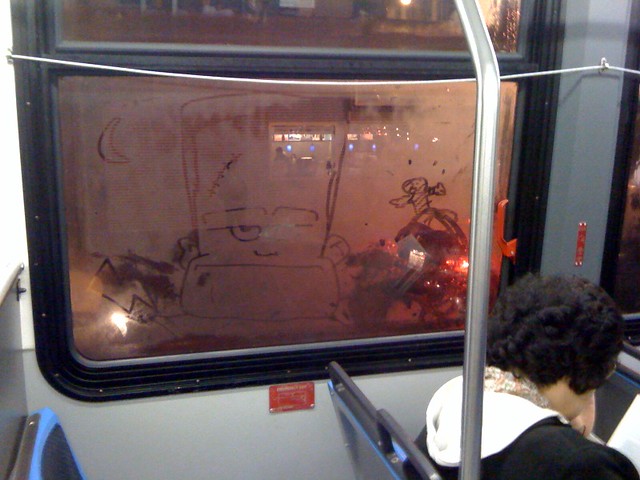 People might be afraid to draw on a foggy window in public for the fear of what people will think. But you know what? Either people won’t care. Or they might even say something nice. Only one time did I have a bus driver yell at me. Other than that, everyone loves to see a drawing on a bus window. In fact one time when I drew a Frankenstein on the window, this nice older woman drew a mummy! 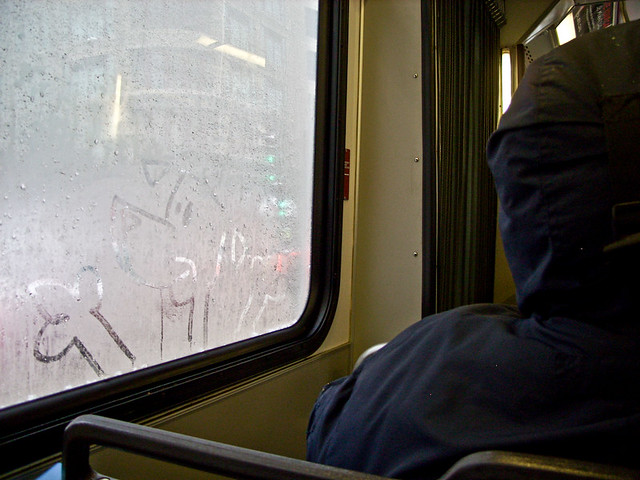 2) Have something stock in mind

You can go freestyle on the window, that’s completely cool. I prefer to have some stock characters that I know how to draw. I’ve got a dog, bird, and snowman. 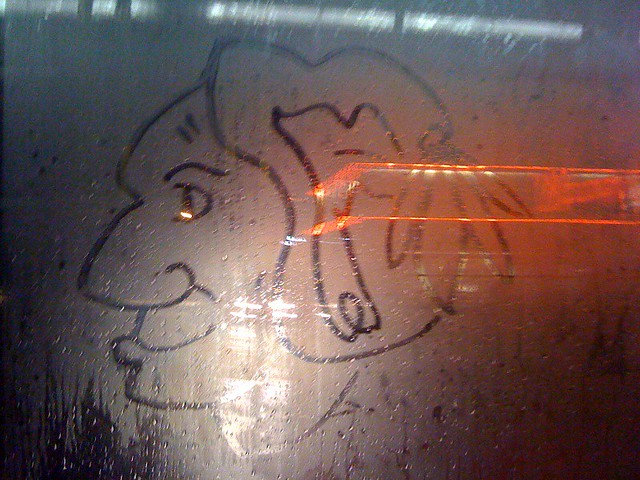 3) Look up something to draw on your phone

If there’s a particular holiday coming up, do a Google image search on your phone to bring up some fun ideas. I’ve done that with a Frankenstein for Halloween. The Blackhawks logo during the NHL playoffs. 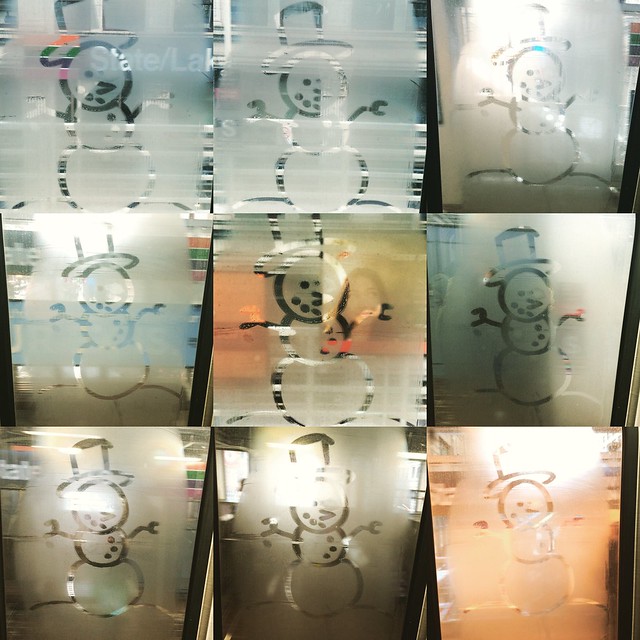 Just one photo won’t yield a great image on a bus or train. The background behind your image is constantly changing. Often times the background may obscure your work of art. Jam on the shutter button on your camera/phone and pick out the best pic later. The middle one in the collage above is the one I ended up using, because I rather like how the woman’s face in the ad is right over the snowman’s shoulder. 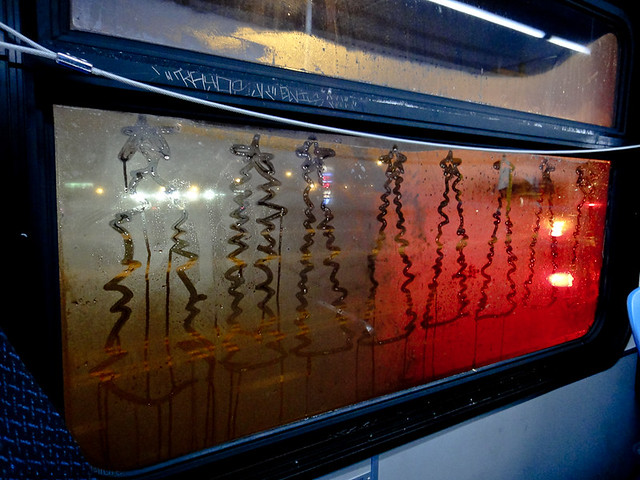 If the night is hanging out during your artwork creation, then try to get some lights in the background. Break lights on a car can make Christmas trees glow red. Bright lights can give a shimmering glow to Count Dracula’s buckteeth. 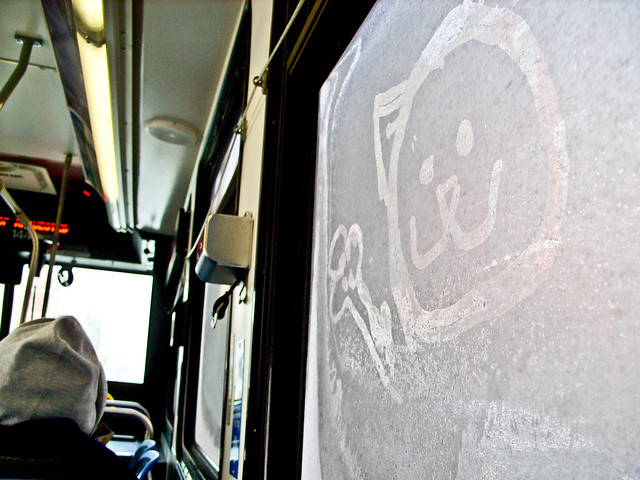 Getting close to your drawing, so only your drawing shows is fine. But also consider taking a photo of the entire environment. You are on a bus! Make sure people see that in your photo. Get some of the window frame. Or perhaps some of the people on the bus. You can make your cat drawing wave to people nearby. 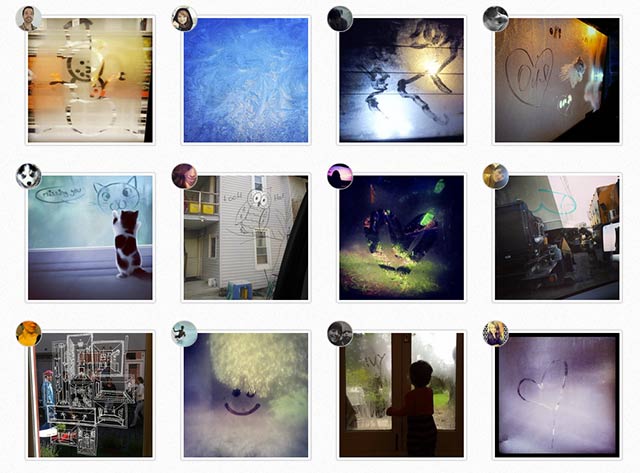 Not only is it great for people to see your creation in public, it’s really rad for more people to see your work online. If you post to flickr, submit your photo to the “Drawings on Windows group. Or if posting to Instagram, use the #drawingonwindow hashtag.

Have some fun and draw on a foggy window! I look forward to seeing your photos!