Every book should have its own hashtag, so we can follow conversations about the book on Twitter.

I’m looking to tweet quotes from an awesome new book “Artists Re:thinking the Blockchain“. However, there is no hashtag for the book. The book is a compilation of multiple authors, so I can’t just @reply the tweet to someone. Heck, there are even four editors to the book! Ruth Catlow, Marc Garrett, Nathan Jones, and Sam Skinner.

Previous tweets about the book are a long line of combined hashtags and author replies. 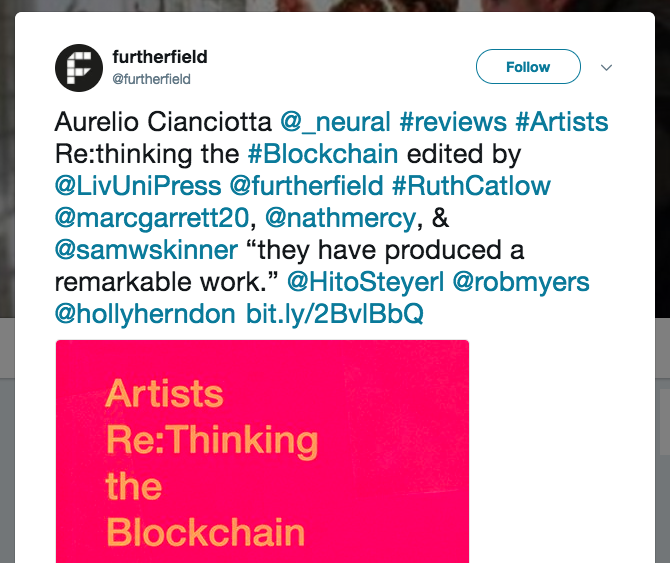 I don’t even know how to read that tweet!

Perhaps the official hashtag for a book could be its ISBN number! The ISBN is completely unique to each book, so functionally, it would work. This book’s ISBN is 0993248748.

This particular book is very techie, and creative. Maybe using the ISBN as a hashtag would be rather fun. Here’s my tweet with a quote from the book: 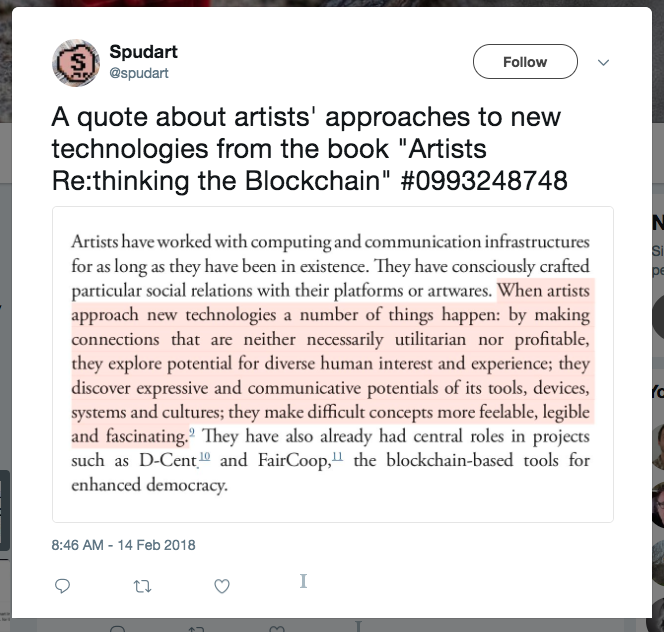 Yeah, it’s a bit weird to have the ISBN in there. Notice how Twitter didn’t even make that hashtag into a link. I believe Twitter doesn’t make numbers into hashtags. Bummer.

If I was the ISBN organization, I would totally have a section on my website that monitors every single ISBN number mentioned in a tweet. There wouldn’t be many, so it would be doable. So far, my tweet is the only one on Twitter that mentions 0993248748.

Another website that could monitor the ISBN numbers in tweets is Goodreads. They are the de facto website where people chat about books. Heck, Goodreads should have a field for each book that declares the official hashtag, so people can easily tweet about the book.