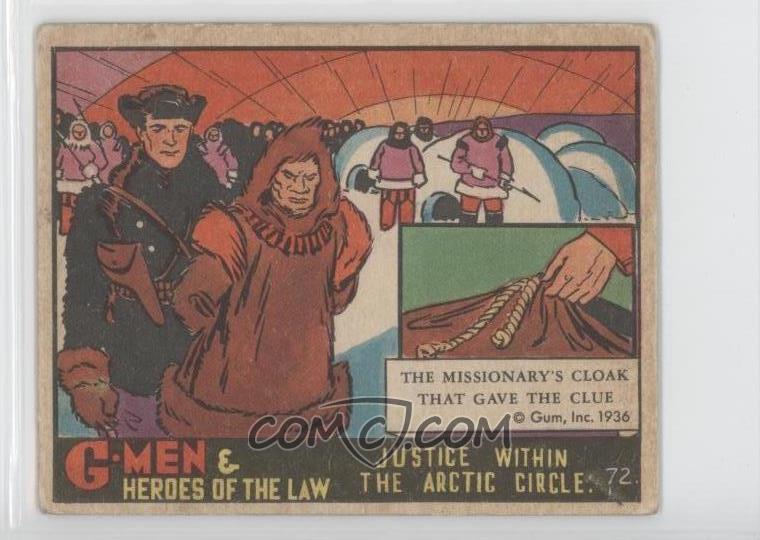 A bizarre trading card from 1936 appeared in my search for arctic cards on checkoutmycards.com. 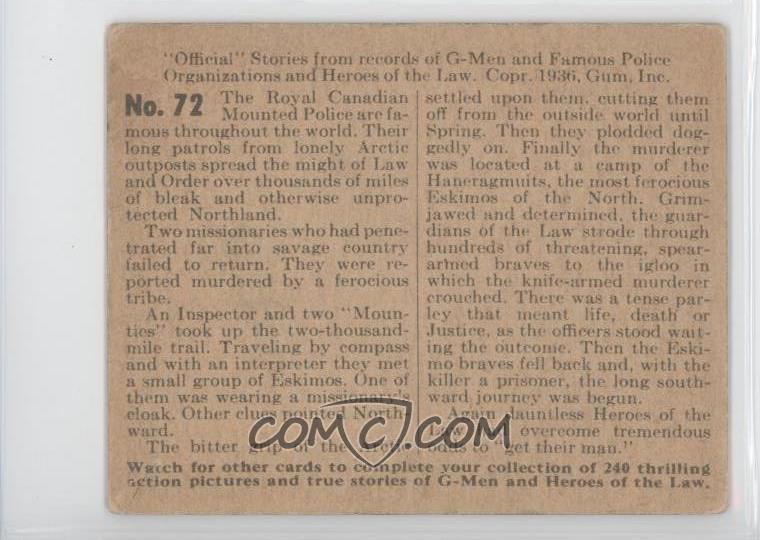 The back of the card reads:

“Official” Stories from records of G-Men and Famous Police Organizations and Heroes of the Law. Copr. 1936, Gum, Inc.

The Royal Canadian Mounted Police are famous throughout the world. Their long patrols from lonely Arctic outposts spread the might of Law and order over thousands of miles of bleak and otherwise unprotected Northland.

Two missionaries who had penetrated far into savage country failed to return. They were reported murdered by a ferocious tribe.

An Inspector and two “mounties” took up the two-thousand-mile trail. Travling by compass and with an interpreter they met a small group of Eskimos. One of them was wearing a missionary’s cloak. Other clues pointed Northward.

The bitter grip of the Arctic settled upon them, cutting them off from the outside world until Spring. Then they plodded doggedly on. Finally the murderer was located at a camp of the Haneragmuits, the most ferocious Eskimos of the North. Grim-jawed and determined, the guardians of the Law strode through hundreds of threatening spear-armed braves to the igloo in which the knife-armed murderer crouched. There was a tense parley the meant life, death or Justice, as the officers stood waiting the outcome. Then the Eskimo braves fell back and, with the killer a prisoner, the long southward journey was begun.

Again, dauntless Heroes of the law had overcome tremendous odds to “get their man.”

Watch for other cards to complete your collection of 240 thrilling action pictures and true stories of G-Men and Heroes of the Law.