At the time of this folder, Lola the comic strip had been around for five years. It’s in over 100 newspapers and we wanted to bring it up to the next level. So a new sales folder was to be created for the salespeople to go out and sell it into more newspapers.

The previous folder had positioned Lola more of an old grandma. The salespeople wanted to position her more as a fun grandma and focus on the relationships she has with her family.

This appears in the 2004 Graphic USA Design Annual. 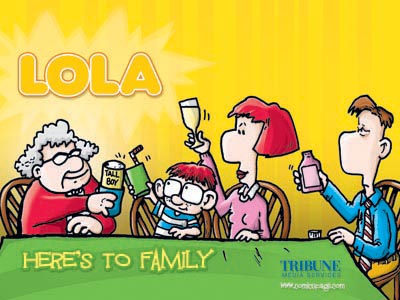 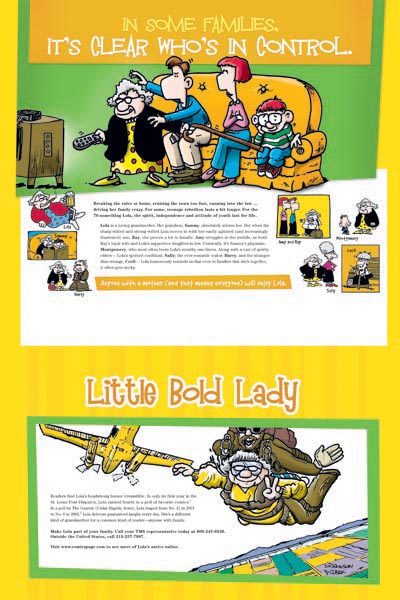 Text from the inside:

Breaking the rules at home, cruising the town too fast, running into the law …

driving her family crazy. For some, teenage rebellion lasts a bit longer. For the

70-something Lola, the spirit, independence and attitude of youth last for life.

Lola is a loving grandmother. Her grandson, Sammy, absolutely adores her. But when the sharp-witted and strong-willed Lola moves in with her easily agitated (and increasingly frustrated) son, Ray, she proves a lot to handle. Amy struggles in the middle, as both Ray√≠s loyal wife and Lola√≠s supportive daughter-in-law. Comically, it√≠s Sammy√≠s playmate, Montgomery, who most often bests Lola√≠s mouthy one-liners. Along with a cast of quirky elders√≥Lola√≠s spirited confidant, Sally; the ever-romantic suitor, Harry; and the strangerthan-strange, Cecil√≥Lola humorously reminds us that even in families that stick together, it often gets sticky.

Readers find Lola√≠s headstrong humor irresistible. In only its first year in the St. Louis Post-Dispatch, Lola ranked fourth in a poll of favorite comics.1In a poll by The Gazette (Cedar Rapids, Iowa), Lola leaped from No. 12 in 2001 to No. 6 in 2002.2 Lola delivers guaranteed laughs every day. She√≠s a different kind of grandmother for a common kind of reader√≥anyone with family. 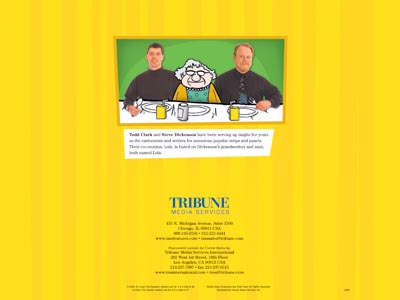 Text from the back:

Todd Clark and Steve Dickenson have been serving up laughs for years as the cartoonists and writers for numerous popular strips and panels. Their co-creation, Lola, is based on Dickenson√≠s grandmother and aunt, both named Lola.

Hello to all of the Lola’s out there

Hello to all of the lola’s out there i love you all!

hello hello! i’m lola the white bellied caique. and for all you siilies out there who don’t know what a caique is, i’m a PARROT. lola is one of the most frequently chosen names when people get a pet bird so don’t confuse me with the other lola’s you know. i’m not just any lola, i’m LOLA. ta-da!