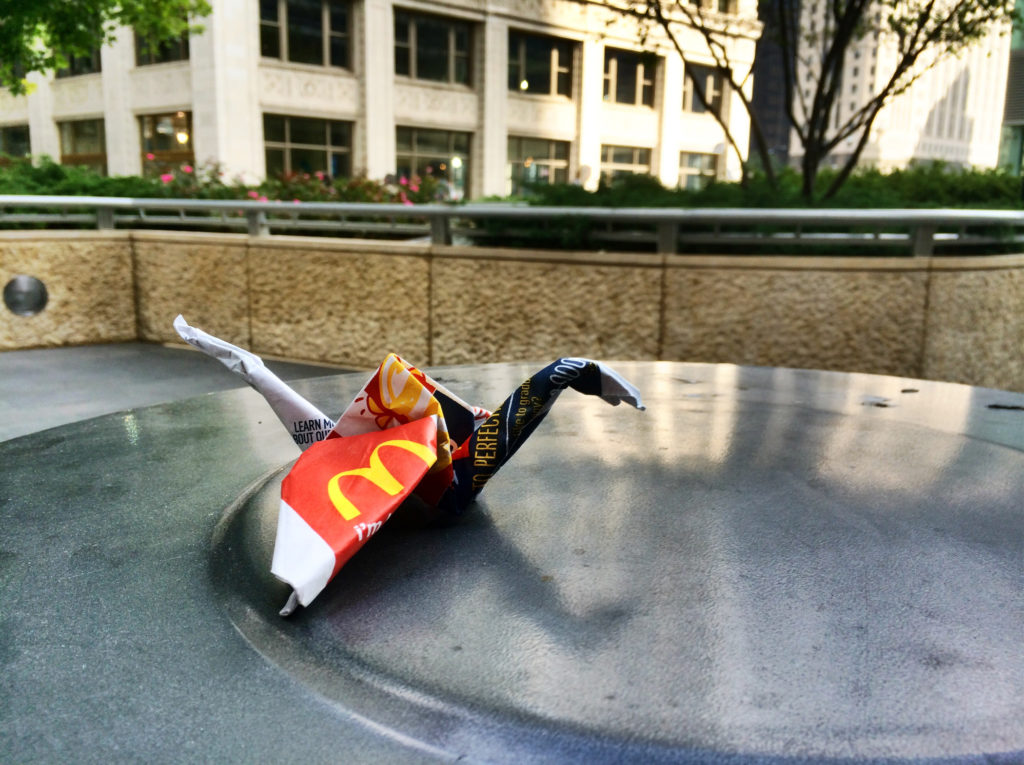 Transform your fast food paper bag into an origami creation that will change the way you eat food, and how you view your time.

While sitting in the McDonalds next to the Trump Tower, I folded my McDonalds bag into an origami crane.

Yet, we throw the bags away. Next time consider recycling your paper bag, or maybe even make a creative project with it.

Another form of recycling is to make the paper bag into an origami creation. Most origami starts with a square sheet of paper. Rip the bag into a square size. Make sure to include the logo inside the square. The origami looks way cooler with the logo appearing. 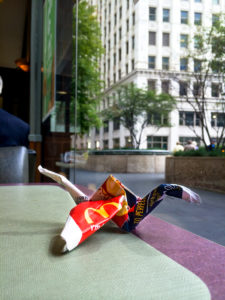 Folding origami after your meal can become a tradition. The time it takes to fold the paper encourages us to slow down. Fast food pushes us to go, go, go. Get your food, eat it, leave. Create an origami out of the paper bag and enjoy the moment. Yes, you can even enjoy the moment inside a fast food restaurant.

Or you can fold the origami during your meal. Instead of scarfing down your food, take your time while you fold an origami crane, or perhaps a butterfly. As you fold the paper into a crane or butterfly, you are transforming the sheet of paper into something else. This transformation goes beyond the literal paper-to-animal. The transformation represents the conversation of a change of mind. Consumers can come to realize that fast food bags can be recycled or reused.

Leave your origami behind

Once you are done eating, you’ll have a wonderful origami creation. Leave it on the table for someone to discover. Just as you had a pleasant time slowing down in a fast food place, perhaps someone else will share in your thoughtful day.

You might even photograph your origami creation to share with more people. You’ll have the striking context of the origami against the place of its origin, the fast food shop. Share your photos on social media. People will love it. The main photo pictured above got over 12,000 views on Flickr.

Try different spots to photograph your origami. In addition to the table inside the restaurant, I photographed my origami crane on top of the McDonalds garbage can outside.

While I was photographing the origami crane, a woman came by to throw something away. She saw me squatting behind this garbage can in downtown Chicago. She probably had these thoughts run through her mind:

She hesitantly came up and threw away her garbage and then walked away. 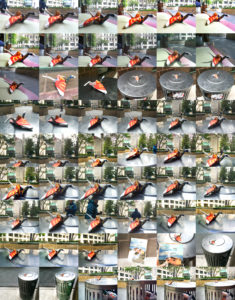 When you make your origami creation you’ll find yourself getting into taking photos of it. I squatted behind this garbage can for 10 minutes taking photos.

I had to get just the right angle. Eventually the smell from the garbage can reached my nose, but ignored it, and kept on shooting.

When I posted the photo on Flickr, it got into the Explore section of Flickr’s top 500 photos posted for that day on September 18, 2014. The Explore rankings are constantly changing. At one point it was ranked as high as #237.

Eventually Explore dropped the photo from their rankings, but the encouraging comments remain on Flickr.

I plan on creating more of these origamis from fast food paper bags. If you make any, please let me know in the comments, or tag your photo with #fastfoodorigami.

Now that I’m making origami out of fast food paper bags, I’m always going to get my food to go! Even if I eat it there.