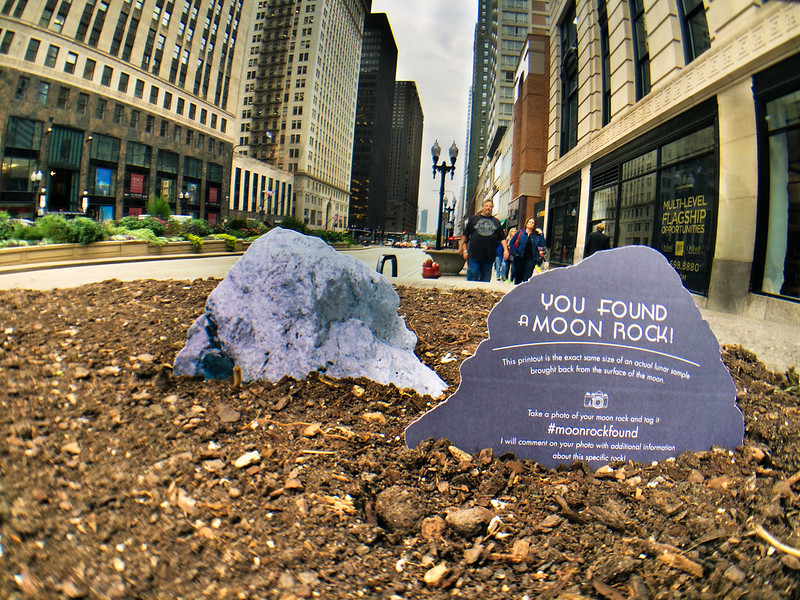 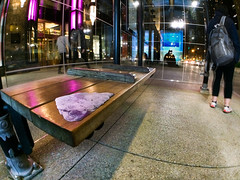 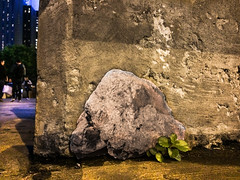 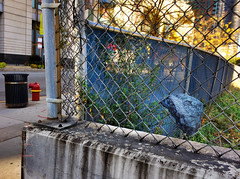 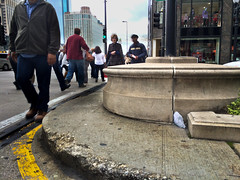 Printouts of moon rocks are being found across downtown Chicago. On the back of each printout reads:

You Found a Moon Rock! This printout is the exact same size of an actual lunar sample brought back from the surface of the moon. Take a photo of your moon rock and tag it #moonrockfound I will comment on your photo with additional information about this specific rock!

The idea for this project sprouted out of my “Star Wraps” public art series where I take NASA images of nebulas, print them out into strips, and wrap them around objects in public spaces. The results are absolutely beautiful. The sense of scale from wide nebula to small object on Earth is absolutely immense. But I really wanted to leverage something in outer space we are all familiar with–the moon.

Placing the moon as public art would be something everyone can relate to. We see the moon almost every night. The opportunity to make this project a reality came as I was taking an online course, Art of the MOOC, with over 4,000 people signed up. The first assignment was to displace an every day object in public. The Moon is an everyday object, so I’m displacing that.

Here is the information I submitted for the project:

Introduction
The object I displaced is the full moon in the night sky by placing pieces of the moon in public spaces. I created printouts of actual moon rocks brought back from the surface of the moon from the Apollo missions.

Using four images from NASA’s wide selection of moon rock galleries, I made printouts of these rocks at the actual size of the rock. Carefully taking the measurement of each rock provided by NASA, each printout matches the true size of each moon rock sample. Therefore, when a person holds one of these printouts in his/her hands, it’s like holding an actual moon rock.

I placed each of these moon rock prints against various surfaces in public spaces that mimic the original context of the moon rock. Here are two examples from the 40 placements I did:

Most of the placements were done at night with a full moon in the sky.

The assignment had three criteria to fulfill:

1. A description of the social response caused by this displacement as shown in the images.

When a pedestrian encounters these moon rocks, time and space are displaced as the viewer is standing in a public space, yet they are seeing a rock from the moon. The moon rock is displayed in context of an earth texture. The rock seems like it would belong–because it is a rock after all. Yet the rock is from the moon, thousands of miles away–on a night with a full moon in the sky. 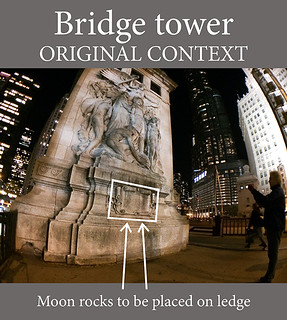 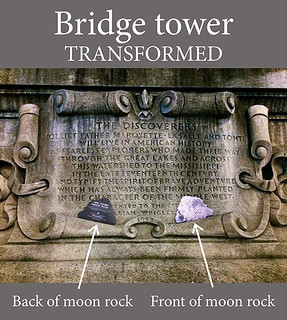 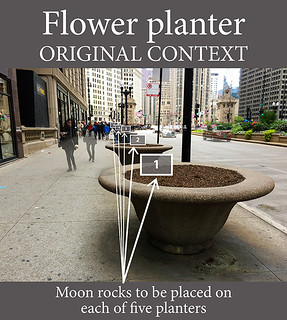 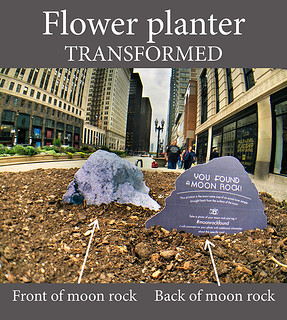 Flower planter reaction:
At the flower planters, a worker from the Chicago Tribune came up and inquired me about what I was doing while photographing the rocks. The contrast of the moon rocks against the earth soil was very striking to this passer-by, and he was delighted to read the back of the moon rock printouts with the explanation.

2. A description of your efforts to conduct the event, including any relevant efforts that did not produce a result. 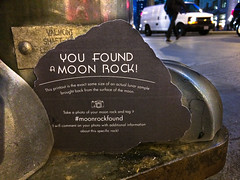 On the back-side of each of the moon rock printouts is:
A) An explanation that these printouts are the actual size of the moon rock.
B) A call for the beholder of the moon rock to take a photo of the rock and tag it with #moonrockfound.
C) A promise that I would comment on each tagged photo with more information about that particular rock.

To date I have placed 40 different moon rock printouts, and I have yet to find any photos on social media using the #moonrockfound tag. I believe this is just a numbers game, as I estimate 1% of people who would be likely take the effort to photograph and tag their discovery. While 40 rocks is a great start, I simply need to place a larger quantity of moon rocks to yield the desired result.

3. Briefly highlight and explain how at least three topics, artists or projects mentioned in the lecture are directly related to your project.

The “Moon Rock Found” mimics three artists’ work:
A) Robert Smithson’s “Spiral Jetty” displaced and documented earth rocks. I displaced and documented moon rocks.
B) Ant Farm’s “The Eternal Frame” re-enacted JFK’s assassination. My project re-enacts the Apollo astronauts discovery of each moon rock. Just as the astronauts picked each moon rock off the ground, so are pedestrians picking up a moon rock off the ground. The Astronauts passed the rocks along to scientists for further analysis. Pedestians will pass along photos of their rocks for me to give additional explanation about each rock.
C) Cai Guo-Qiang’s fireworks are ephemeral events in the public space. These rocks are also ephemeral in the public space, as pedestrians pick up each rock and take it away.

It’s rather funny that when it’s wet and raining outside, I cannot place moon rocks in public. Water: something the moon lacks.

I’m feeling like I need to bring this Moon rock project to another level. Leaving one or two rocks in a location isn’t enough. It would be great if I could print a six-foot ball moon rock. But:
A) they did not bring back any six-foot ball boulders.
B) I do not have a printer that prints six-feet tall.

I spend too much time with each rock photographing it. Maybe I just need to drop way more rocks.

So cool to see new scientific discoveries about the lunar rocks I’m leaving around town as public art. https://www.nasa.gov/feature/goddard/new-nasa-study-reveals-origin-of-organic-matter-in-apollo-lunar-samples

Pretty cool that an ad for the Museum of Contemporary Art Chicago appears on this blog post. smile emoticon Here’s a screenshot on twitter: https://twitter.com/spudart/status/660539729428021254