According to my math, 31% of Flickr’s free accounts have over 1000 photos. Flickr’s CEO Don MacAskill says it’s only 3%.

First let me put a disclaimer. I love Flickr. I want to see Flickr succeed. And I believe that is through allowing their archive of photos to live. (and not delete the photos of free accounts). Flickr announced a hard limit of 1,000 photos for free accounts. Anything over that limit will be deleted—starting with the oldest photos.

Just how many people are effected? 31% of my friends with free accounts.

I follow 282 people on Flickr. A small but decent sample size of a real user. I follow a range of accounts: people I know in real life, people I found online, and various organizations. I never tried of following people so they would follow me back. They are all authentic accounts, and I am authentically following them.

Let’s filter out the people who have zero photos. These are people who pretty much never did anything with the service. They shouldn’t really count in any numbers. That’s 31 people, about 10% of the people I follow. When I initially followed them, I hoped they would post. But they never did. These 31 people won’t be in our calculations.

About one-third of the free accounts have over 1,000 photos.

One-third of Flickr’s free users are going to have photos deleted!!! That means I have 55 people I need to warn. 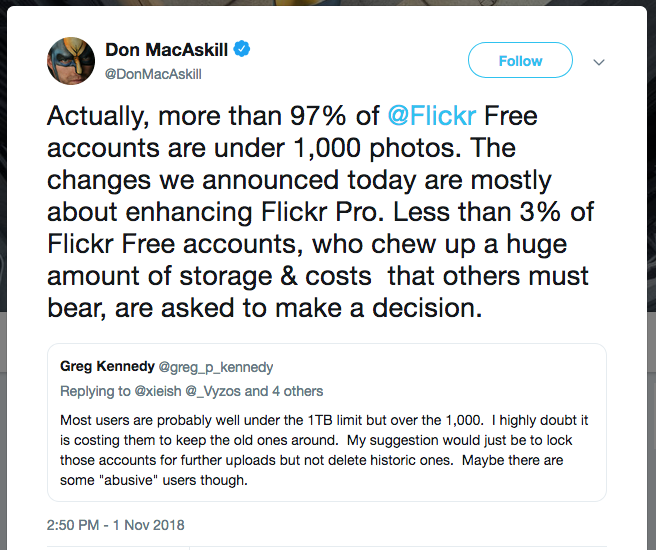 Certainly he has all the numbers. I’m not saying he’s lying. I’m just saying that their overall math is different than a single user’s experience, like mine.

All I know is that one-third of my friends with free accounts are about to have thousands of their photos deleted.

Oh, but you might say, “but many of those people don’t really use Flickr anymore, so they won’t care.”

Who are these people? Let me show you that these are real people.

15 active Flickr users with free accounts who will have photos deleted:

The numbers shown are the total number of photos currently in each person’s account.

You can also put myself on that list! I have a free personal family account with 12,000+ photos, all set to private. I have it as a free account, because only about six family members are able to view the photos. I already pay $50/year for my public spudart flickr account. I’m still deciding if I want to fork over another $50/year for my family account.