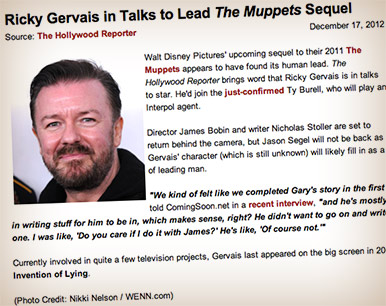 Comingsoon.net reports, Ricky Gervais in Talks to Lead The Muppets Sequel. I’m just happy that there is a Muppets sequel. Some of the people commenting on that page are saying how Ricky Gervais is box office poison.

But it doesn’t matter what human is in the Muppets movie, because the Muppets movies are about the Muppets. Who goes to a Muppets movie because of the human actor? Nobody. And besides, there are so many other celebrities appearances in each of the movies, that who really cares about which human appears more than the other humans?

Yeah, I was thinking about the Transformers when I wrote this post. I haven’t seen any of the Teenage Mutant Ninja Turtle movies. I wonder if they did the same with those (make the humans the focus).

The same argument can be applied to Transformers. Did people go see the Transformers movie series for the humans? No. Clearly not. They went to see incredibly cool robots doing incredibly cool things. But somehow Michael Bay thought it would be better to focus on that dopey kid in the first Transformers movie. Realistically that movie should have been called “Dopey Kid” cuz that’s what it was about. How many people would have gone to see “Dopey Kid”?