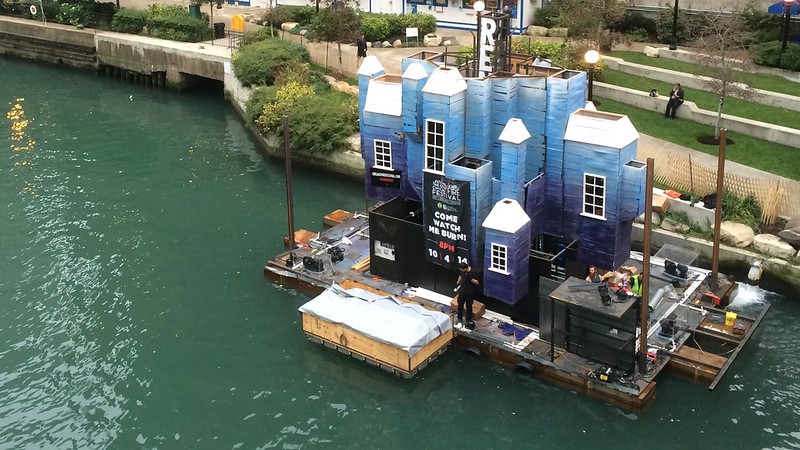 Every couple years Chicago has an event with such electricity among the crowd, you feel like you are participating in something special.

In all these events the crowd was on fire. The October crowd for the 2014 Chicago Fire Festival had an electricity. The chilly temperatures brought out only the brave. The evening twilight provided the backdrop for a unique event, a theatre on the river.

A sense of the unexpected was in the air. Just how would these houses burn down? What sort of dramatics will we see with mixing fire and water?

The crowd packed in along the Chicago River, on a young riverwalk under 10 years old. Everyone claiming spots to see one of the three houses burn down. The large crowd of all races mixed in with the spectacle of public theatre had the feeling of an Olympics opening ceremony. I commented to my fiancee, “this must be what it feels like to be at an Olympics ceremony.”

We all stood around waiting for the festivities to start. Just how will they pull this off? A loud voice came over the speakers introducing the event, explaining what the meaning behind different caludrons being ignited by representatives of different communities. Ah yes! Instead of country representatives in the Olympics, there are community representatives.

The flame was carried in by an artistic steamboat. However due to the curve in the river, we couldn’t see the steamboat. Only the voice of Mark Stafford, the MC, could be heard explaining how Chicago was a timberbox 142 years ago.

Then a pause. A long pause. Half an hour passed by without our house being ignited. The crowd chanted, “WE WANT FIRE! WE WANT FIRE!” and “BURN IT DOWN! BURN IT DOWN!” In response, the dismebodied voice explained over the speakers, “Ladies and gentlemen…we’re having some electrical problems. But sit tight, this is going to be a GRAND SPECTACLE”

The voice came on again, “Thank you for waiting, due to electronic problems, the fire will be set manually.” The crowd said things like in these tweets:

Wow RT @jlizak #greatchicagofirefestival is a bust. Only one of three houses is working. People leaving in droves and or mocking organizers.

If the #GreatChicagoFire had taken this long they would have been able to put it out. — Mike Ewing (@miketewing) October 5, 2014

The crowd chanted “GET A COW! GET A COW!” 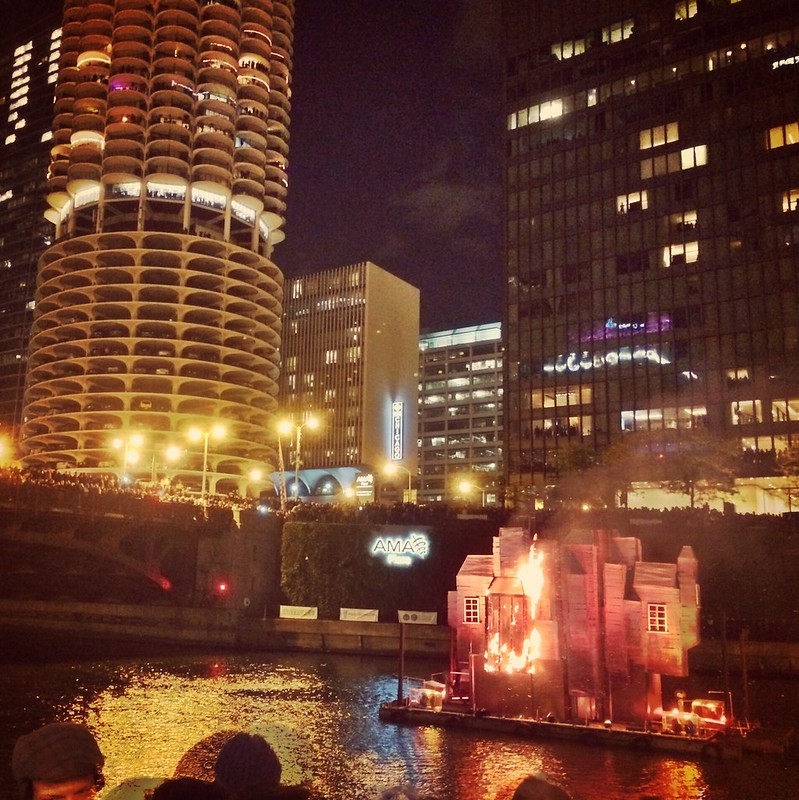 A small fire was finally spotted inside the house. The crowd cheered with relief. The fire died out. The crowd laughed. This malfunction made it seem all the more like being at an Olympics opening ceremony. The 5th spire that wouldn’t lift at the 2010 Vancouver Olympics. The 5th ring that wouldn’t expand at the 2014 Sochi Olympics. Now the houses that wouldn’t burn on the Chicago River.

A few more minutes pass by and eventually the fire started to catch on slowly. Very slowly. It looked like watching a campfire where the wood slowly–s l o w ly–burns.

Thanks Chicago! You officially hosted the worse bonfire ever! #chicagofirefestival #ChiFireFail

As the Chicago Tribune reports, the crowd left “feeling burned.” But Chicago has a past with electrifying events dieing out. The 2003 Cubs were five outs away from going to the World Series only to lose the game. The 2007 Chicago bid for the 2016 Olympics ended up with Chicago getting last place.

But Chicago always manages to rise up from defeats. Chicago will rise again after the Burned Chicago Fire Festival.

Cool to hear ‚ÄúWe‚Äôll be able to re-use 90 percent of our materials next year.‚Äù

And people have been saying that 2 million dollars of taxpayers money was spent. That’s wrong. The Chicago Tribune reports:
About $350,000 in city money was allocated to the event ‚Äî $100,000 from last year‚Äôs budget and $250,000 from this year‚Äôs ‚Äî all of it in grant funding from the Department of Cultural Affairs and Special Events, said Michelle Boone, the department‚Äôs commissioner. Another $1.5 million or more came from companies and foundations, according to Redmoon Theater, which staged the event.
http://www.chicagotribune.com/…/chi-ald-burke-calls…