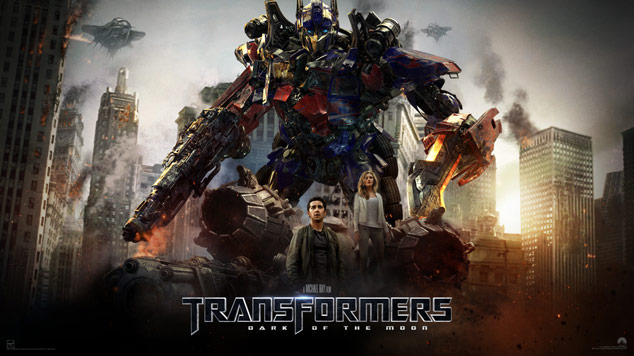 My first words to people at work after seeing the midnight showing of Transformers 3, “I’m so glad that Chicago is not totally destroyed in real life.”

My review of TF3 is broken up into several parts.

They had to mention several times throughout the movie that Megan Fox broke up with Sam. Ok. We get it. Ok. Sam has a new girlfriend. We get it. But no, they have to drag it on how about Sam realizes that he loves Carly.

They had too many scenes where they overhyped the hotness of Carly. To show that a woman is beautiful, just show that she is beautiful and let her stand on her own. You don’t need to do the cheesy lines that say, “oh look at those curves.” But judging on the other males reactions in the crowd, they really enjoyed those parts. It was just overdone in my opinion (i like women without the sleaze).

This movie had so many things mashed together, there wasn’t a coherent whole. Here’s all the mashed-up plots:

All that mashed up into one movie. The conspiracy theory stuff was kinda cool, but it seemed a bit convoluted. Maybe I’ll enjoy it more as I see the movie a few more times.

Many times people totally overacted to the stereotype of their role. It’s almost like Michael Bay was saying, “now take your role and make it ten times more dramatic! Dramatic! I want you to be dramatic!” But sometimes it works. Look, I’m not going to this movie for fine acting. I’m going to be entertained. So I can see how there was all this dramatic acting. Oh, let me put the fun dramatic acting under the good…

Ken Jeong (the teacher from the tv show Community) was hilarious! Jerry worked with Sam and revealed some of the conspiracy theories. John Turturro played his funny conspiracy theory guy. John Malkovich also did a funny character of the crazy obsessed boss. NO RED CUPS!!!

And even though I say that there was a lack of a true villain in this movie, we still have an interesting character in Sentinel Prime. The original leader of the Autobots before Optimus Prime. The inventor of the space bridge. Dude has some history. And then how he turns on the Autobots, because he truly sees a vision to bringing Cybertron to earth. It makes sense. It’s a great turn in character. I just kinda wish he was more villainy when he was a villain. Heh. Funny I should say that. As if killing Ironhide wasn’t enough.

The Chicago destruction was very cool. They really destroyed the city. I got to experience a lot of it first hand as I work in the Tribune Tower facing a lot of the scenes. I almost feel like I FELT more of the destruction by seeing it in person rather than on screen. In the movie it felt more like a painting. Lots of interesting paintings. The best part of the movie is at the very very very end. On the LaSalle Street Bridge (pictured above in a photo I shot) is where Megatron and Sentinel Prime both die. It was an awesome fighting scene. Most of the movie is quickie action stuff with all this destruction around. But Michael Bay picked a great spot for this final battle. The strong curing metal arches of this bridge provided a great backdrop for Optimus Prime and Sentinel Prime’s fight. And then Megatron comes in and kills Sentinel Prime from behind. So much like Megatron. But then Optimus Prime rips Megatron’s head off! Fffrrzzzp! Seriously! He just ripped that thing off like a dandelion.

It was cool how those little Autobots transformed into computers. And how Laserbeak transformed into a monitor. Also Laserbeak being a Japanese copy machine was hilarious. Laserbeak was a cool character. It’s too bad he had more personality than Soundwave.

Bumblebee reaching up into that Decepticons chest and blowing him away was cool.

I was totally geeked when the soldiers used Tribune Tower as a sniper location to shoot off Decepticons. Great use of the architectural arches.

It was totally cool walking downtown this morning seeing all the buildings from the movie. It was also a delight to see them not destroyed in real life.

I was kinda sad to see Starscream go (killed by Sam Witwicky!). And i was sad to see Ironhide die. But at least Ironhide’s death was to underscore the drama of Sentinel Prime’s turn to the Decepticons. SHOCKER! Seriously. We were like, WHAT!

In Transformers 3, The Milwaukee Art Museum is a museum for cars. The incredible atrium is the office of the leader of the museum, Patrick Dempsey. An office? That was just weird. But whatevs. I kinda wish they showed some of the actual art in the museum. But instead it was all classic cars. But I suppose that’s fitting. Him being a Decepticon spy leader. That his cards were Decepticons. That makes sense.

The trailer has one of the most incredible scenes ever in movie history. Optimus Prime flies into Wacker Drive, transforms, and then totally kicks ass with his sword. But in the movie, they only showed his legs moving along. It was like they cut off the top half of the scene.

What I wish the movie had:

A breakdance dance-off between Soundwave and Blaster.

Less humans more robots. As my brother said in IM, “you know how they edit out all the swear words for movies on TV? I wish they sold DVDs of movies that are edited like that. TF3 is the perfect example. I think there’s really no place for it in a movie that sells an enormous amount of toys related to the movie. I think it’s highly inappropriate to do both.”

Sentinel Prime needed a sidekick. He looked alone on top of the Jeweler’s Building.

Thanks Tom! My review is a combination of mish-mash thoughts–kinda like the movie itself. 😉

overall its a good movie better then 2 and more action then 1 but what the hell happend to soundwave, I read somewhere that hes up there in the top 5 G1 transformers but what a waist of a great bot!! was really looking fwd in see him in action and saw him twice very disappointing and your right about there not being a real villian and dont remember magatron and shockwave in the same… Read more »

Thanks tbob! I like how you have two different ratings. One as an action film and the other as a true transformer film. Other than the Decepticons getting destroyed too easily, I would say that this film was good in staying to the Transformer legacy. And good point about Soundwave not making much of an appearance. But do you think that Soundwave ever really said or did THAT much in the other Transformers tv shows?… Read more »

Yeah I totaly agree on your view on starscream, he was the opposite in the cartoon to the movie and the facted the decepicons got wiped out so easily was ridicules!!! I mean shockwave having a parachute over his eye, come on!!!! hes just taken down a whole building 5min before. I was a massive fan of the g1 decepicon and not so much the Autobots so that why I have probably givin it a… Read more »