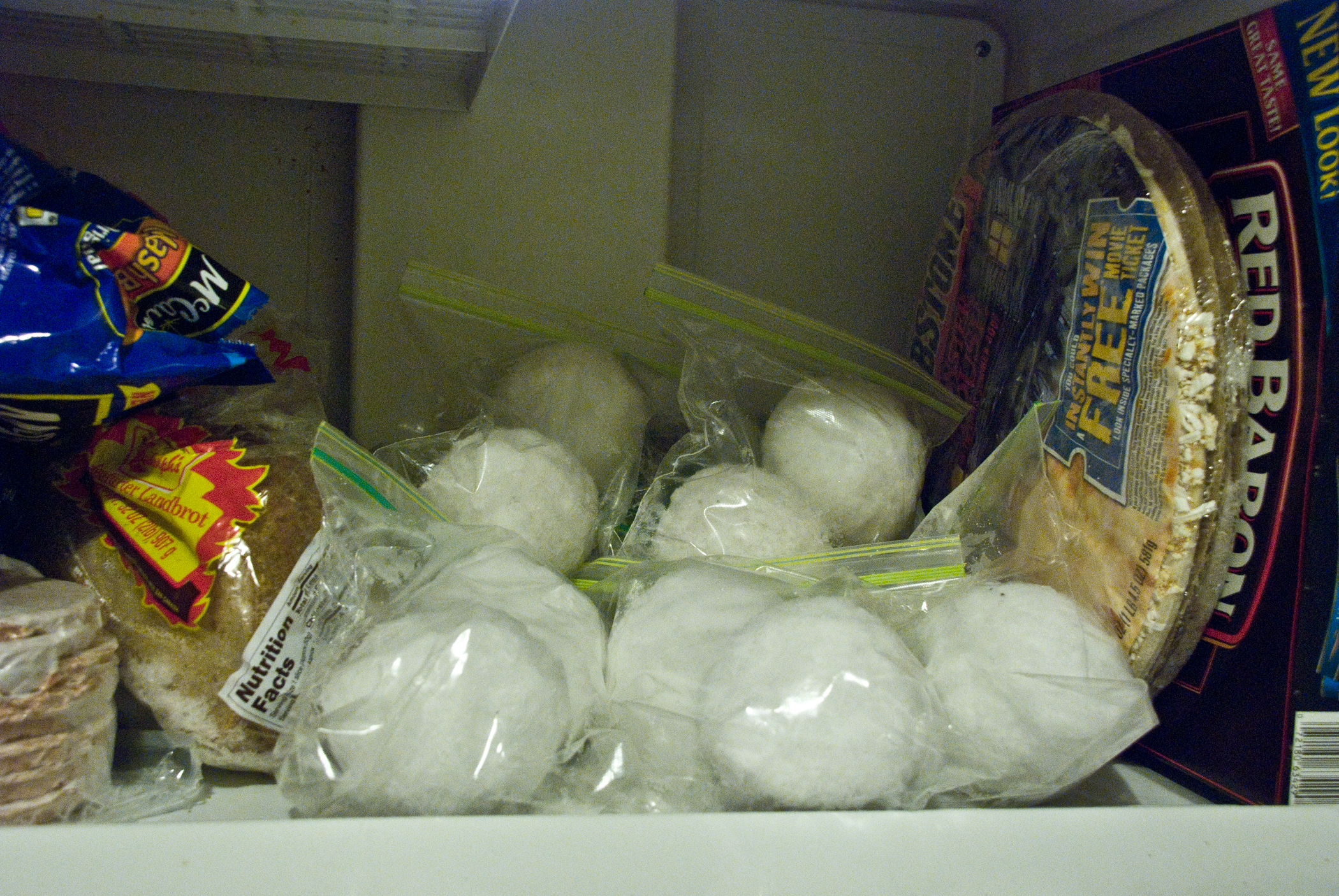 Goal: In the winter put snowballs in my freezer for the summer.

This is so much fun, everyone in Chicago should do this while we still have the last of our snow left.

It’s really cool to be kneeling outside in the freezing weather making snowballs, knowing that they will be used in 100-plus degree weather in the coming months. Muhahahahahaaaaaa! I manically laugh while carefully crafting each snowball, imagining the utter confusion and chaos these snowballs shall bring.

Or maybe they will be used in some sort of duel. Have an argument with someone when it’s 100 degrees outside? If you are storing a bunch of snowballs you would be able to say, “Let’s face off in a snowball fight—RIGHT NOW!”

If you make some snowballs to save, just remember these couple of tips:

1) Put them Ziploc baggies in your freezer

If your fridge happens to turn off, you don’t want a big pool (thanks to tom for this hint)

It would be fun to have a snowball fight with a bunch.

3) Wear gloves while making the snowballs

I was making them with my bare hands at first and I could only get through four snowballs before my fingers were almost frozen. Gloves make it much nicer. Although I have to admit, the non-glove snowballs are probably better formed. The warmth from your hands slightly melts the snow, making a more compact and tight ball.

4) Don’t use salty or dirty snow

Who wants to throw a dirty snowball in the summer? Blah! Or if there is salt in the snow (and this is just my hypothesis) the snowball might, like, get all melted in your freezer, cuz like, the salt in the snow will melt the balllllll. And like, you don’t want it to be the middle of summer and you go to get your snowballs only to find them a pool of frozen salt water. Noooooooo-o-o-o-o-o!

Now everyone should be very very careful around me in the summer when the days are above 100 degrees!

Congratulations! That is so cool! I think you should take your snowballs to The Taste of Chicago! What a riot! Interesting poing about making snowballs with or without gloves. I remember that the best snowballs were always made with my bare hands. But to your point, you can’t make too many before your hands are frozen! I’m looking forward to being pelted at The Taste by one of your snowballs!

now you just need to build a trebuchet to fling your snowballs hundreds of feet.

The freezer’s defrost cycle might actually be enough to break those ice crystals down to plain ice over time. I tried this as a kid and when I took the snowball out in June it had turned into an ice ball capable of smashing someone’s face.