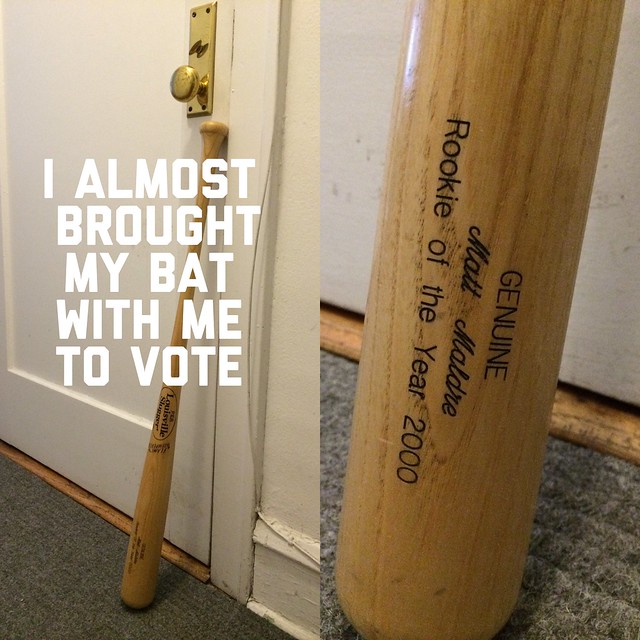 Every year my company, Tribune Media Services, used to have award ceremonies. One of the awards was Rookie of the Year with the trophy/plaque thing being an actual Louisville Slugger baseball bat customized with the recipient’s name and his/her first year at the company.

I won the award in 2000. Today I was going to bring my Rookie of the Year bat into work. But then I realized I was going to my polling place to vote. I thought it would be strange to bring a baseball bat into the voting booth.

But my all-American friend Jed pointed out, “it seems appropriate. Baseball and voting are two of the most American things.” Good point! And I could have driven a pickup truck to the polling place too–instead of walking over. Pickup trucks are so much more American than walking. 😉

The year I won the baseball bat, the awards were at Harry Caray’s. The walls in this restaurant are covered in baseball memorabilia. Upong leaving with a baseball bat in my hands, it felt like I was stealing something off the wall. However, the ride home on the subway felt very safe. Actually, not really, because carrying a baseball bat on the subway makes you feel like an instigator.

My cousin Peter Kreten points out, “If I saw someone walking down the street with a bat, I would get nervous.” Especially when the person with the bat has a ski mask and scarf on–as I did today.

Now I wish I brought the baseball bat with me to the polling place. Just for the experience.

Oh, and why I would want to bring my Rookie of the Year bat to work. One of my former co-workers Rookie of the Year a few years after me. He kept his bat at his desk. I always thought that was cool to see his bat sitting there. Therefore, I’m bringing my bat into work.