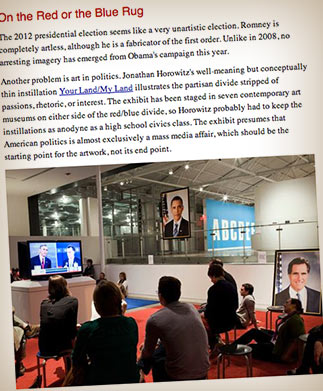 Would you sit on the red carpet or the blue carpet? Richard Prouty wrote a blog post about an interesting performance artwork by Jonathan Horowitz.

Cool performance piece. Yeah, we do end up staring at a television, sitting in separate areas, but at least here people on one side are able to see people watching on the other side. It’s sort of like the people on the other side are framing their visual field of what they are seeing. Seeing this context around the television set might be a good reminder to take what we think in context of what others are seeing.

Now what if some of the participants were sitting right on the edge of the carpet where red meets blue? They wouldn’t see any of the television. Instead they would be engaging with each other. Perhaps there could be a whiteboard running perpendicular with the tv sets, so people “meeting in the middle” can discuss and generate real solutions.