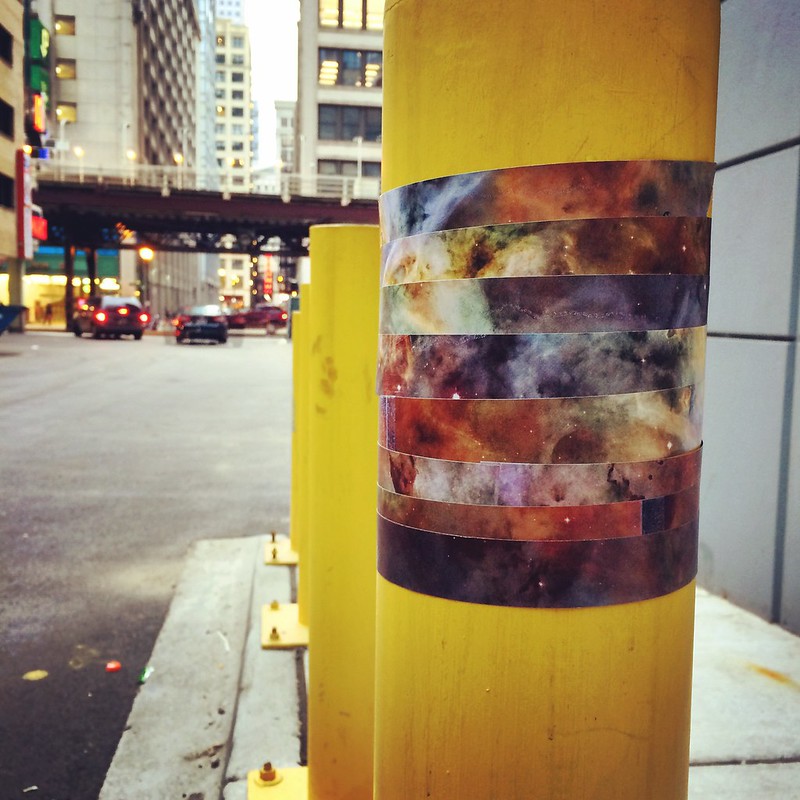 I had a feeling something was going to happen while I was carrying around a eight-foot long print of the Carina Nebula. My plans were to wrap this colorful strip of paper around something in public and take photographs of it. This art placement is part of a series I call Star Wraps (flickr gallery). 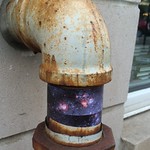 Normally I use only one strip of paper 10 inches long by one inch wide. A simple little printout of a galaxy wrapped around a pipe or fence post. But today I wanted to do something with more impact. Something larger. I took ten of these strips and taped them together into one long strip, eight feet long.

Carrying the Carina Nebula in my hands, I walked outside the Tribune Tower during the Money evening rush hour commute at 5:15pm. The sidewalks were extremely busy, full of commuters busily walking home. The sidewalks in Chicago are usually a great place to leave artwork, but the sheer amount of people everywhere just didn’t feel right. I would get in people’s way with placing this artwork. Plus, people don’t like their photo being taken in the background.

Something just didn’t feel right for me to place this artwork tonight. However, determined to place this artwork, a quieter place was needed. I departed the parade of people on Lake Street, and turned down an empty alley. The alley was somewhat clean being next to a new hotel, but had a demolished toilet. I figured that the people in this alley don’t care too much about what happens here, because, really. A smashed up toilet is in the alley. 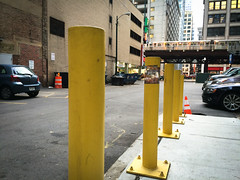 Around the corner was six bright yellow poles to prevent trucks from backing up into the hotel building. The rhythm of the poles was very striking. The photo of the placement would have great contrast through the empty poles against the single pole with the wrap.

Dropping my backpack, I looked around to make the alley was legit. The Carina Nebula came out of my backpack, and I wound it around the pole. The number of times the nebula can wrap around this pole was surprising. Eight times.

As I was photographing the pole, a woman who looked to be the building manager walked out with a maintenance man. They both walked right by me to a point on the alley that was cracked up. The woman was pretending to talk about the crack. But that’s not why there were there. They wanted to see how I would react to their presence. I simply continued taking my photos.

She asked me in a friendly manner was I was doing. I explained to her that I was photographing this wrap around the pole. I didn’t pretend it was like someone else’s work. I laid claim to it directly. Knowing what she was getting after, I told her that I would remove it after I finished photographing it. I demonstrated how it was attached using painters tape to not affect the pole.

Knowing that I was no longer a threat she asked me if I was doing this for work. I was dressed in a tie and blazer. I responded that I just enjoy doing this and taking photos.

I happily pointed out to her that this is to demonstrate dynamic ranges of scale. The huge galaxy is contrasted against the small pole.

She was like, “uhh, ok, just make sure you remove it when you are done, ok?”

Granted, I like to leave my art behind for others to enjoy. In this case I made the exception for her request. Besides, these printouts are a little bit time consuming to make (moreso than a simple sticky note). At least I’ll get a little bit more mileage out of this Carina Nebula.

Six lessons learned:
1) A demolished toilet does not mean that people don’t care about their alley.
2) When you have a weird feeling to not drop a piece of artwork, listen to your instincts.
3) Take ownership of your street art
4) Never damage public property. Just in case you get caught, you need an easy out. I’ve always practiced this rule out of respect for other people’s property. But in this case, it saves your own skin too.
5) When placing artwork, wear a tie and blazer. People won’t freak out as much.
6) Wear a Narrative Clip when placing artwork. It would be fun to capture encounters with other people like this one.