If you could invent a country, what would you come up with? How about a country on another planet or another moon?

The Saturn moon Enceladus has been in the news lately, as NASA is flying the Cassini probe over this small moon of Saturn. The very unique qualities are worth investigating, like a global ocean locked under miles of thick ice!

How would you like to become a citizen of Enceladus? Just leave a comment below the infographic explaining the Enceladus country.

This infographic was made for a public art class I’m taking about Public Art. This week’s class covers “Fictions, Alternative Structures, and Mock-Institutions” The instructors covered many areas under this topic including mock corporations, fictional churches, and micro-nations.

One of the micro-nations involved an artist floating an island to his home country. Professor Nato Thompson explains Alex Hartley’s Nowhere Island:

An artist named Alex Hartley, in collaboration with a group called Situations, produced a project where they floated an island from the Arctic to England through international waters. Thus, the island became its own nation.

Playing a kind of idea of international law, and nation status. When it became its own nation, they began an online petition of gathering citizens, where they acquired 23,000 citizens. When it docked on the coast of England, the land was redistributed to its citizenry as their own kind of place.

Other artists like NSK and Billionaires for Bush have created their own countries that mirror the wrongs of government.

I’m more interested in creating a country that shines light on the good that could come from countries. When I’m coming up with a country, I don’t want to subvert what we have on planet Earth, so my country is based on a Saturn moon Enceladus. 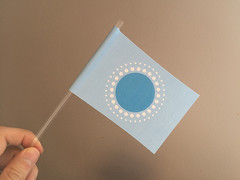 Would you become a citizen of Enceladus?

If so, I’ll send you a free flag in the postal mail! Let me know in the comments on this blog post (I will email you back, once I receive your comment).

I’d like to become a citizen! I’d also like to make Plunge Day an annual tradition in Chicago, but October 28th? Brrr, it’s too cold to jump into a lake or fountain! But I sure am going to like Fountain Day on March 9th!

sign me up. I will become a citizen of Enceladus. I. Cem Onur.

I think my Galactic Citizenship already has me covered… but I should probably request to become an official citizen just in case. Local records and everything.

Sign me up. Yes. As I am already a diplomat of the Conch Republic, a Yedi Knight, a ULC priest and owner of lunar property, sign me up. Please. Thanks.

Is a Yedi like.. a Jedi-Yeti?
Always good to hear from a fellow ULC minister!

Sign me up. It will go nicely with my wife’s Martian crater collection.

Ha! This is so cool! One of my friends is running an online course through EdX on Extraterrestrial Life. It’s a course put together by Harvard and MIT. They talk a lot about Enceladus!

Inspired by the reboot of the Outer Space Men I have started making my own space figures. My first is an Enceladan. With your permission I would like to use your flag design to attach to his flag pole he is already holding.

I’m happy that the second result in a Google image search for enceladus flag is a photo of the flag I designed.

I would love to become a citizen of Enceladus! Thank you for welcoming me to this waterworld: a moon-country with virtues not found in any country on Earth!

Actually, the first citizens are probably these microbes: https://www.wired.com/story/if-theres-life-on-saturns-moon-enceladus-it-might-look-like-this/