K-mart sells the Scout Walker from Return of the Jedi!? No way.

How much does the Scout Walker sell for on K-mart? A search on kmart.com for scout walker doesn’t show the Star Wars Scout Walker. Instead it shows walkers for elderly people. 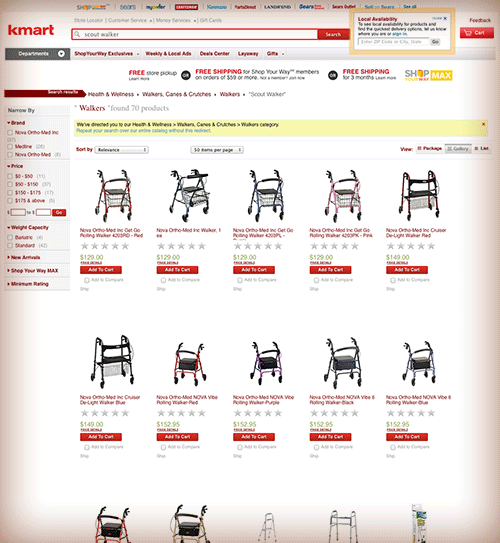 Is K-mart making some sort of commentary on the age of the actors in the original Star Wars triology? Instead of using a AT-ST Scout Walker to get around, perhaps Mark Hamill, Harrison Ford, and Carrie Fisher would use an old people walker.

(I know I know. Luke Skywalker, Hans Solo and Princess Leia would not get around in an AT-ST anyways. That’s an Empire vehicle. Perhaps Darth Vader would use the walker. Wait. He’s dead. How about Grand Moff Tarkin? Also dead. Well, nobody is gonna be able to use the old people walker. It’ll just sit there unused. Much like the AT-ST Scout Walkers after Return of the Jedi. Do you suppose the ewoks used these vehicles once they regained their independence? The ewoks would have probably just accidentally blown up the Scout Walkers.

Now an elderly walker. That’s what the old ewoks would use around the village. When I get old, I want to fashion my old-man walker to look like a Scout Walker. Concussion-grenade launcher on one side, light blaster cannon on the other. Twin blaster cannons in the middle. Then a furry wookie attached to the top.