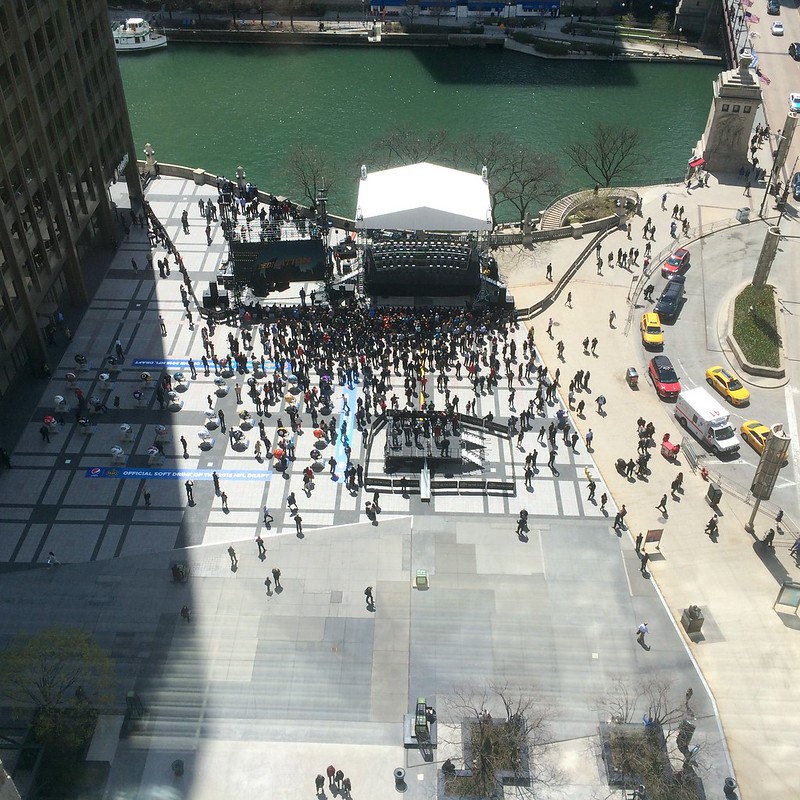 Crowd control gates lined the streets of Michigan Avenue outside Tribune Tower. The kickoff to the NFL Draft in Chicago was supposed to be huge. Such a large crowd was expected that people were going to be spilling over into the street. The sun was shining. The court was filled with NFL Hall of Famers and top prospects.

I want to be pro-Chicago and declare this event fantastic. Chicago should host more events like this, but Pioneer court was nearly empty. A handful of people showed up, just enough to line up in front of the stage. The first time in 51 years that the NFL Draft was happening in Chicago, and right outside my work window in the Tribune Tower. I had to go down and check it out in person.

The crowd was thin enough where I was able to walk right up to the front and watch. About a dozen NFL Hall of Famers were announced, the crowd didn’t seem to know any of them. I didn’t. Except when Dick Butkus was introduced. Then people started to take photos.

With the fantastic architectural backdrop, I took a pano sweeping from the jumbotron displaying Butkus’ name along to the stage and the crowd. I got lucky with the photo, because with panoramics, you never quite know the exact moments when it will pick up certain actions. But I just so happened to get the frame where he was shaking hands with the MCs. 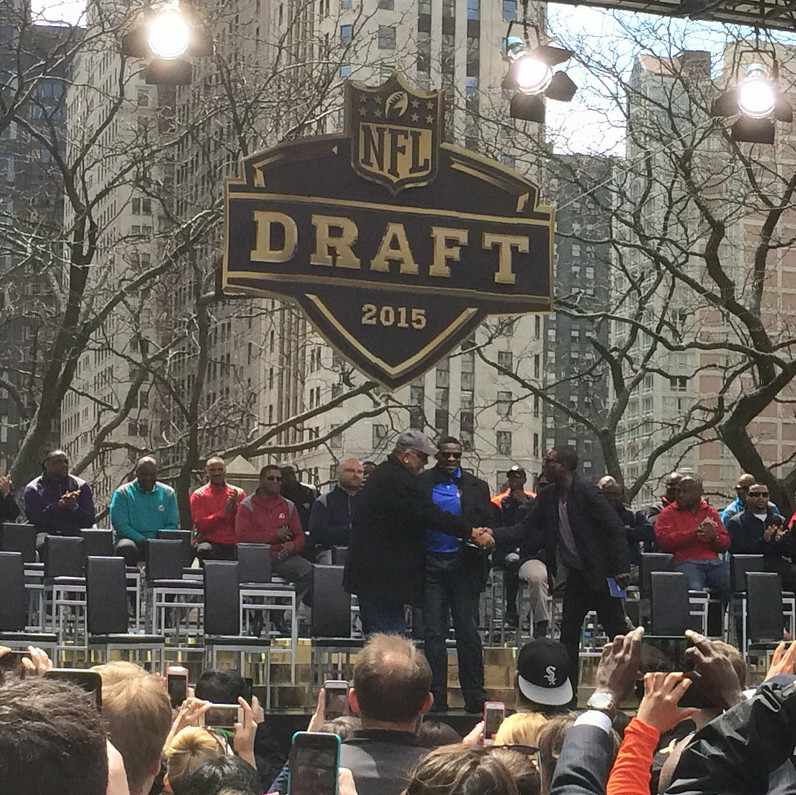 Maybe the event was not very well attended, because it was in the middle of a workday on Wednesday, a bit chilly outside. Even though the stage was being set up for a good week before the event, there were no signs saying the day and time of when the actual introduction was taking place.

Just as soon as they introduced the dozen prospects, the event was over. But not before the mysterious voice on the speakers asked all the Hall of Famers and prospects to stand up with the crowd and take photos with the crowd. The players were very confused and hesitantly stood up thinking they were supposed to mingle with the crowd. Instead they all just stood nervously for a minute until the voice came back on the speakers thanking them.

Then all the players walked off the stage, probably wondering if maybe this event would be been better hosted by a local high school where you would at least have a few hundred, or maybe even a few thousand yelling teenagers. Instead you had a few tens of business people walking back to their jobs, looking at the cell phones and the photos they just obligatorly took (including myself).

Here’s hoping the other events that take place in Grant Park will be more well attended.

A fun little thing. As the players were walking off the stage, the speakers were paying Black Eyed Pea’s “I Gotta Feeling.” The lyrics “tonight is going to be a good night” was a total flashback experience for me, because the Black Eyed Peas played that very same song live on Michigan Avenue back in 2009. I posted a video of it on Youtube, and it has over 6 million views. https://www.youtube.com/watch?v=QnJ49hv5Rho