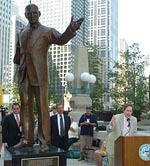 A nine foot tall bronze statue of Irv Kupcinet was recently installed to commemorate the man behind a record-breaking 60-year Chicago Sun-Times column. He even is depicted holding a Sun-Times final edition under his right arm. The 9 feet tall statue is on the Northeast corner of Wacker and Wabash, just across the river from the site of the previous home to the Sun-Times paper. Makes sense. Put the statue by where the Sun-Times used to be. Nice memorial. 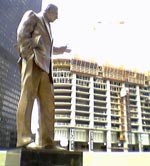 Now look at this picture. It’s odd how the statue’s left hand is pointing towards the Trump Tower. It’s like the statue is saying, “Now lookit this great building (that is not the Sun-Times building) across the river!”

i want to hang something from his arm. What would be something good to hang from Kup’s arm? I don’t think you can fit toilet paper rolls on his arm. That would be funny. Fit 8 rolls of toilet paper on Kup’s arm. It would symbolic on how s***ty the Chicago Sun-Times is.