Someone on the train is using a phone with a cracked screen. I ask the person to pull up a photo on flickr or instagram. Then I take a photo of the person’s cracked screen showing the photo.

People using cracked-glass phones are very interesting to me. How the lines interact with the content on the phone. The fact that the person using the phone learns to ignore the lines. The very visceral nature of the cracks calls to mind the physical nature of our devices upon which we view the world.

What would be a good photo to show on a cracked screen? Should it be the floor of the train? That would provide a nice simple backdrop for the cracks. The photo of the floor would have some good texture to it. Not just some generic photo. But one close enough to the floor where you can almost feel the material.

I’m too shy to approach strangers, so this will probably never happen. But it’s fun to think about how different photos would appear under various cracked screens. This idea was inspired by the book review for “The Camera as Afterthought: Defining Post-Photography.” This looks to be a very interesting book. One of the examples in the review is a series of photos of paintings from museums that show the glares from the museum lighting.

I’ve done a series similar to this with Light on Ellsworth Kelly at the @artinstitutechi. 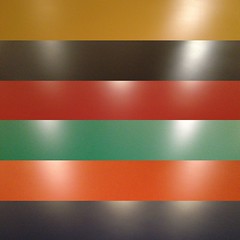 Anyways, back to cracked screens. What would make for a cool photo to show behind a cracked screen? Looking through cracked screen photos on flickr, the ones with the most simple background tend to show off the cracks better.

just shared this link with me: did you see this posted on reddit yesterday? https://imgur.com/AeJzgAt

My response:
oh that’s neat!
wow
oh man
that is soooo cool
THAT IS WHAT I WANT TO DO NOW
take a photo of the peron’s screen and then make a painting
and email it to the person to use