Inside each plastic treasure chest is a hand-written message that says “What is your treasure?”

These plastic treasure chests are put out into the public for people to discover and ponder this message.

The type of person that would pick up a treasure chest has to invest some faith by investigating a tiny box discovered in public. By following up on their curiousity, they could be more likely to actually consider the message on the inside.

The message inside asks someone to think about what their treasure is. A valuable question that really points to what is important in life.

Upon removing the paper message from the treasure, the chest is empty. The viewer reads the message and symbollically fills up the chest with their own thoughts.

The medium used here, the tiny plastic treasure chest, was originally created to hold a child’s tooth. The original home of the child’s tooth was a mouth, also a pocket (or compartment) much like the treasure chest. With the mouth we express ourselves, just as this treasure chest asks the viewer to do. 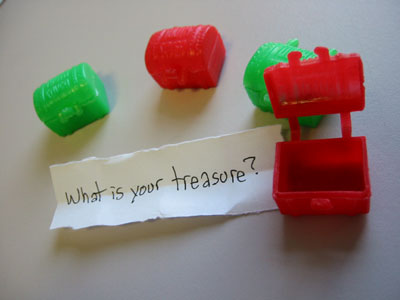 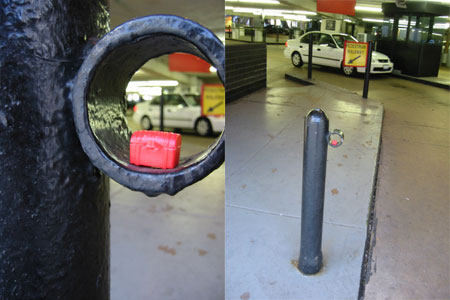 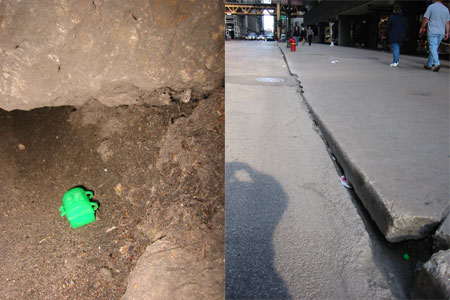 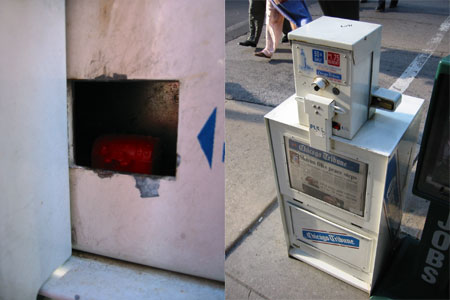 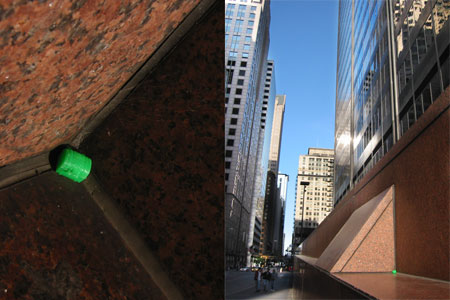 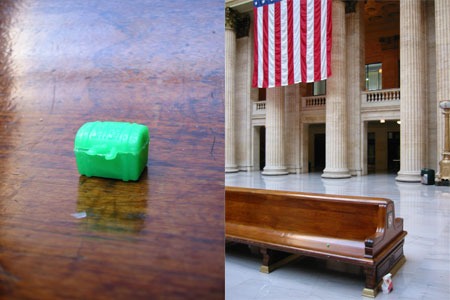 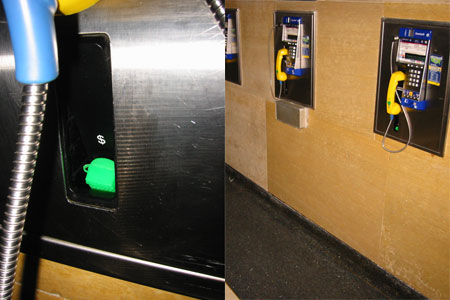 My treasure is GOLD! GOLD!

you’ve placed all these chests in very public places. I wonder how different the impact would be in the private sector… say at The Gap or the local White Castle or perhaps at your place of employment or even at friends and family’s homes.

I really like this idea, it very creative, but what am i saying, this webpage is so creative and i enjoy it very much!!! Keep up the great work!!!

wonderful idea. I found your webpage because I am trying to find tiny treasure chest to purchase for a couple’s retreat and these are perfect! Would you be able to tell me where I can purchase a very large order of these? Thank you very much! P.S. My greatest treasure is my God and my family!

I bought mine from http://www.orientaltrading.com But it looks like they don’t carry them right now. Oriental tends to carry items and then they’ll run out and won’t carry them for awhile. Here’s some other places that sell the same chests: 144 for $5.95 ($0.04 each) 200 for $13.95 ($0.07 each) There’s a ton of treasure chests out there, but here’s the ones that are under $1.00 each: 48 for $7.95 ($0.17 each) $0.75 each Some bigger ones, clear Although the following link didn’t have any of the tiny treasure chests, it sure had lots of other pirate and treasure links for the ULTIMATE PIRATE THEME PARTY. http://www.partymerchant.com/pirate_party.htm

I like your idea of placing little chests places, but its lame and I’ll tell you why. I work for a dentist and he sends those chests home with each little child that has a tooth pulled. If any of those children ever see your chests, their hearts will be broken and not feel as though they are special.

but maybe they make adults feel like kids again.

See Matt, THAT, is why you make the big bucks! By the way my treasure is my future.

I spent a few months in Chicago in 2003, and I love seeing these photos of places in the city 🙂 I think I recognise some of these spots. It’s a fun idea, and I can imagine some of the thoughts such a find would inspire. I think the link you’ve made between the chests and the mouth via the child’s tooth is a bit tossy and pretentious, (just had to throw a negative in for balance ;D) but the rest of your words explain this idea really well.