Today I turn 43 years old. Then I find out that a retirement home chain tweeted my quote six times!

Now that I feel like an old man, my very own quote assures me of the opposite. That I’m not old! So yeah, maybe I should take my own advice.

How did this bizarre twist come about? Over 40 quotes are attributed to me on quotesdaddy.com. Seeing one of your quotes sit next to Walt Whitman and Dr. Suess is rather bizarre. (Although the Quotesdaddy website appears to be no longer live.) Here’s a screenshot: 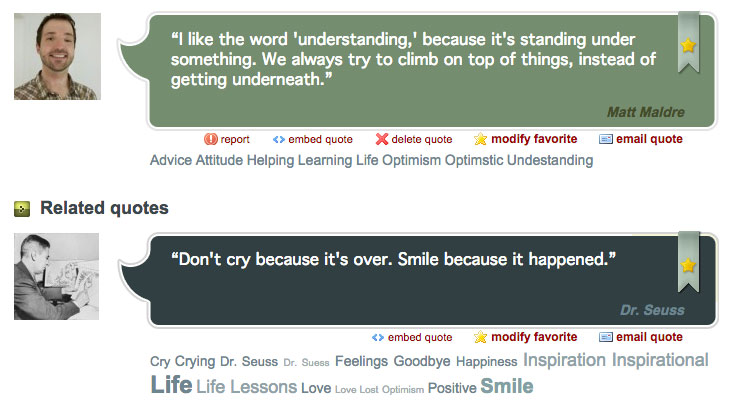 Even having an Albert Einstein quote come up as one of the “Related Quotes” to one of your own is amusing.

But my most famous quote—by far—is this one:

“Age is not how old you are, but how many years of fun you’ve had.”

I originally wrote this quote as an instant message to a friend in 2007. Then I put the quote in a newspaper layout used by 25 different newspapers across the country. For a couple of years I had the job of laying out some print newspaper pages that were used by various newspapers. It was fun hunting for quotes. On the popular 43things website, I regularly asked people to submit their favorite quotes. On October 3, 2007, I used my own quote in that week’s page layout.

But honestly, I don’t think having my quote in all the newspapers is what made it popular. It’s probably just the Quotesdaddy website. Once my quotes appeared on that website, other quotes websites copied many of my quotes and posted them on their own site. They spread all over the place. The one that got copied the most was the age quote.

I always get a kick whenever people use my quotes, even when it’s a retirement home on my birthday. 🙂

I’m still waiting for it to get published inside a book. No results yet in Google Books.