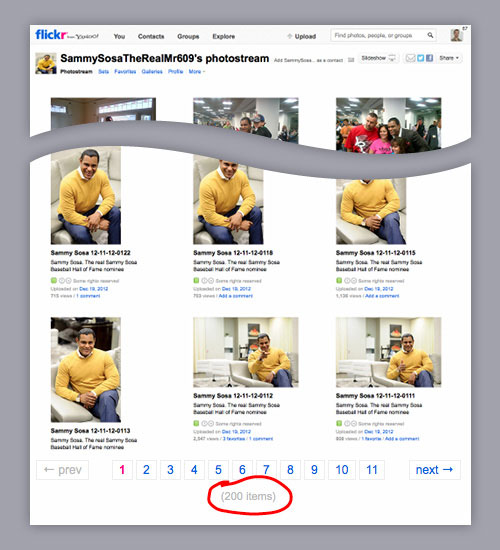 We like to elevate ourselves by looking down on Sammy Sosa, but he’s just a big screw-up. The problem with Sammy is that he has no filter. He just blurts out things in desire for attention. And he does stupid things, like corking his bat and playing loud music. But he just wants attention and love. Poor Sammy Sosa.

He loves being loved. We all do. He’s like some greek mythology god. A tragic character. Flawed, but thinks he’s immortal.

Through the last few years I’ve come to appreciate Sammy Sosa. He’s an entertaining character. He’s provided us with lots of stories, and now a flickr account with many photos of him wearing a mustard-colored sweater.

I’m happy to see new photos on your flickr, Sammy. That’s fantastic! Will you be upgrading your account to pro, so you can have more than 200 photos? I’m saddened to see your older photos become inaccessible. With Flickr Pro, you can upload as many photos as you wish. Just imagine what you could do with an unlimited number of photos.

If you would like, I’ll be happy to buy you one year of being flickr pro. I can email you the activation code. I would be so honored to help your account become pro.

I really do hope Sammy will take me up on my offer. While he can certainly afford to pay the $24.95, it would be so rad to have one his fans help. Imagine being able to say “I paid to make sammy sosa’s flickr account go pro, so he can post an unlimited amount of photos online!” The internet cannot have enough of his mustard-colored sweater.

So far, no response from Sammy or anyone on his team. I don’t expect an answer, but so far his account is still not pro.

Five years later, and Sammy’s team has still not reached out to me. Nor have they made his Flickr account go pro. #bummer