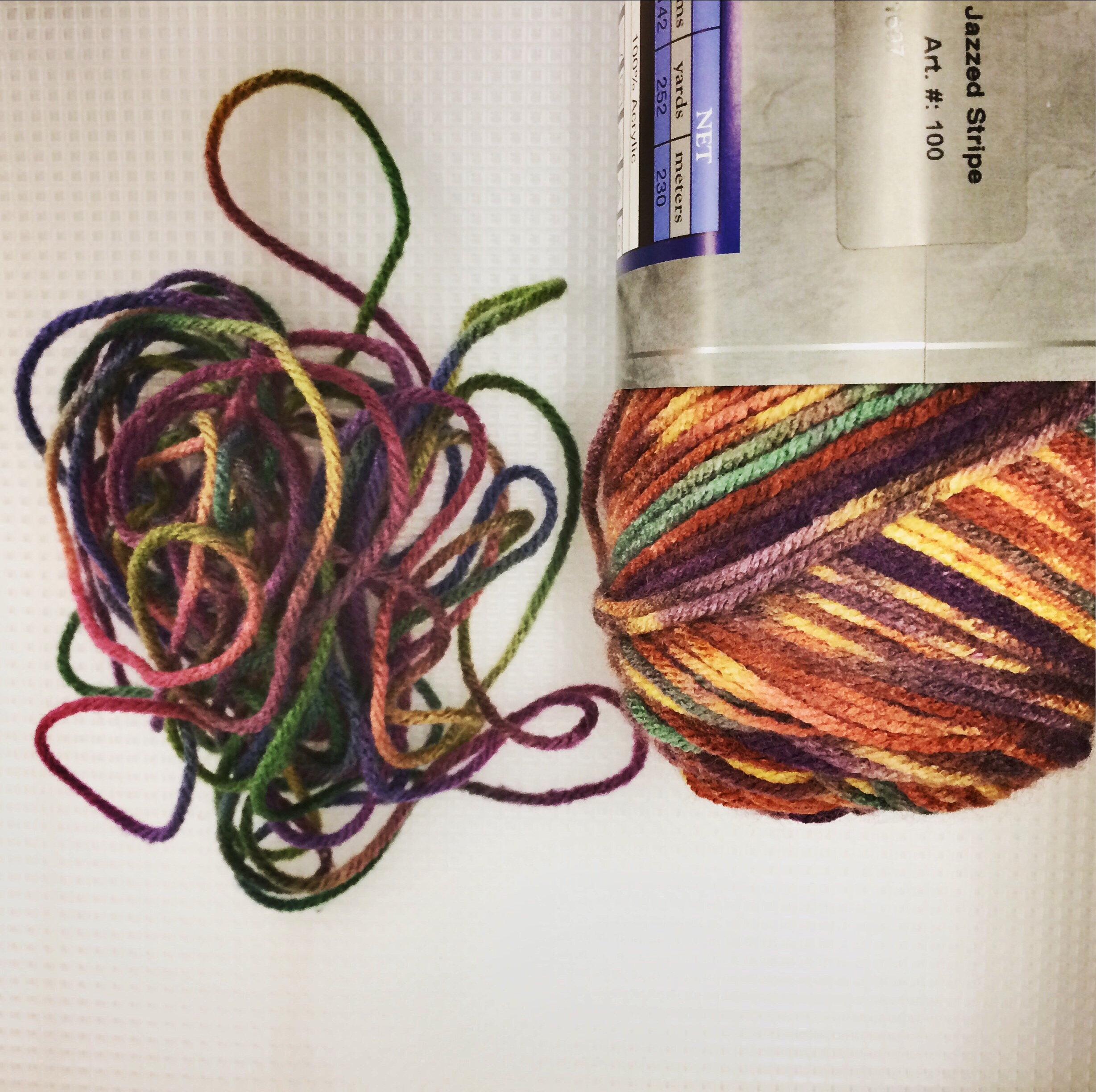 Instead of ribbon, I use yarn. Every single gift I’ve given the past five years has been decorated with this same yarn. Today our supply ran out, so I biked to Hobby Lobby to buy a new bundle of yarn for the next five years’ presents.

I’m very sentimental about this yarn. Sarah owned it before we long before we started dating. When it came time to wrap presents at her place, I would always use this yarn, because it was so versatile. The variety of colors allowed it to match practically any wrapping paper.
And I’d always use this yarn, because it was the only one Sarah had. haha. When we got married, and I moved into Sarah’s condo, all my yarn was moved into storage, making this the sole yarn to be used on packages. Sure, the yarn’s color palette skewed a bit to the late 90s and early 00s. As a graphic designer, I can say there’s a sense about this palette. I can’t quite put my finger on it. But hey, this yarn worked.
Gifts are one of the most loving ways humans connect with each other. On all our gifts–from birthdays to Christmases, baptisms to anniversaries–used this exact same yarn. This yarn has lasted us for five years, from dating, to engagement, to moving into her condo, to having a new girl, to moving into a house.
I never knew I would be so sentimental about yarn, but I’m sad to see this go. And now it’s time for a new yarn.
To pick up our new yarn, I biked from our new home in Glen Ellyn to Hobby Lobby. The bicycle trip in of itself was enough to be representative of where we are at now in the suburbs. It was beautiful, it was challenging.
Since moving in, this was my longest bicycle trip–about 5 miles. Which isn’t that long–which shows that I haven’t biked all that much since moving in. And the bike trip was to a store on Roosevelt Road. Possibly one of the least bike-friendly streets I’ve ever been on. At one point there was no sidewalks! None! The suburban life is showing me how unfriendly the suburbs can be to bicycles and non-car life. (and don’t get me started on the lack of bicycle racks)
However, the other part of the bicycle trip was on the Prairie Path–which is really great and friendly to bicycles. Nice long uninterrupted stretches of bicycle path through shady trees. A definite plus for the burbs.
Arriving at the Hobby Lobby, the sheer size of the place was amazing. Yeah, all Hobby Lobbys are this big, but wow, it was like I was in a crafting warehouse! The selection of yarns was more than an aisle long. Many yarns were multi-colored. Some came close to matching our previous beloved yearn, others were more single-hued in their multi-colors. The closest-matching yarn was the “Jazzed Stripe” yarn. I love that name, because my 10-year-old niece often describes things as “Jazzy!”
The hue on this yarn is a bit warmer. With these warm hues, I hope it will be as functional in matching wrapping paper as well as our previous yarn. I know it will become just as sentimental through the years.