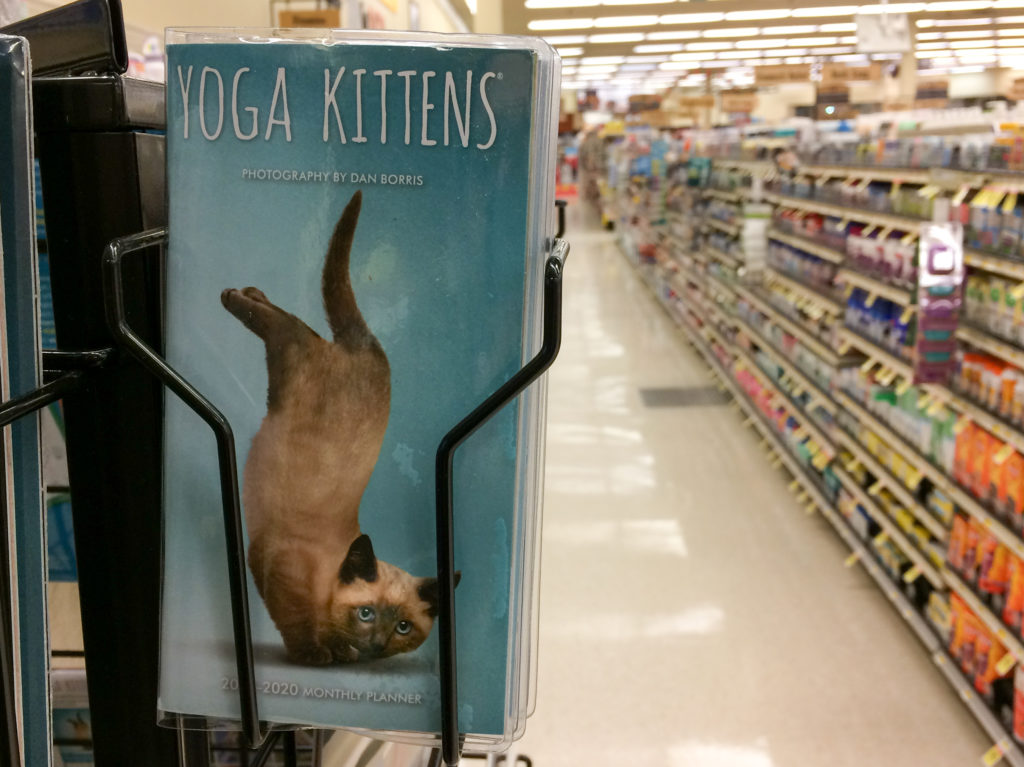 Your local grocery store is a discovery-land, full of many hidden treasures. Today I found such a gold mine.

My wife Sarah has a Secret Santa at work that likes yoga. She asked me to go to Jewel to see if they have any yoga magazines. Sarah was putting the presents inside a cute, fuzzy, long sock/stocking. The magazine would roll up and fit inside, poking out the top (along with some other fun things she already bought).

I searched and searched that Jewel for the magazine section, but all I could find was a rack of calendars in the very corner of the store by the pharmacy. One of the calendars was photos of dogs doing yoga. Maybe that would work?

Eventually I asked someone for the location of the magazines. She pointed me to the exact opposite corner of the store. The magazine rack was pretty thin. The decline of print. Sigh. Of the smaller selection of magazines, none were even fitness related. Some were about food, but most were Christmas themed.

I called Sarah with the bad news, “No yoga magazines, but there was a calendar with yoga dogs.”

She replied that her Secret Santa person is cat person, not a dog person. So I went back to the opposite corner to snap a few photos of the dog yoga calendar for Sarah to see.

When the calendars came within sight, I was totally excited. In addition to the yoga dogs, they have YOGA KITTENS! PRRRRRRFECT! OMG This is BOTH yoga AND kittens! This person likes both, and here before my very eyes are images of kittens doing yoga.

AND. AND. In addition to the regular square calendars, they also had thin planners, about three inches wide. Totally able to fit in the stocking. The square calendars are too big and stiff. But this Jewel, a grocery store of all places, had a selection of options for Yoga Kittens. 12-inch calendar. 7-inch square calendar. And 3.5-inch wide planner.

What kind of wonderful world do we live in where this sort of mashup between two varying interests comes in an array of options?!

This sort of amazing surprise could not be communicated over mere text. I HAD to call Sarah and tell her the good news. When you’re on the phone at a store, generally, you try to stay quiet, so you don’t annoy other people with your conversation. But this conversation must be heard by anyone within ten aisles.

At 9pm on a Wednesday night, this suburban store was very quiet.

“Sarah, guess what? THEY HAVE YOGA KITTENS?! CAN YOU BELIEVE IT? YOGA!!! KITTENS!!!” I had to repeat that several times loudly. Some guy walked by, I wanted to make sure he heard me—because he also needed to know about YOGA KITTENS.

Same with the pharmacist. She was just sitting at the counter, bored out of her mind. I gladly provided her with some entertainment of the night. I like to think when she gets home tonight, she’ll tell someone about this crazy guy who absolutely loved the Yoga Kittens calendar.

Now I wish that I described each of the poses for every month over the phone to Sarah.

“The April kitten is doing the Bālāsana!”
“August is performing the Kapotasana. Wow! this kitten is flexible! Look at that form!”
“How do they train these kittens to do these moves? We should train our cat to do yoga.”

Note: we do not have a cat. Sarah and I are not cat people. Which, I think, makes this all the more amusing that I would get so excited over the phone about kitten yoga.

haha! Thank you, Ellen! Late night trips to Jewel tend to be amusing. 🙂

Actually, now I want to see a calendar with Yoga Transformers.