The artist known for his own shade of blue. Yves Klein patented International Klein Blue in 1961. He passed away one year later at age 34.

During that brief time, he painted all sorts of things blue—human bodies, monochrome paintings, and body casts. His artwork continues to be posted on Artsy’s website. 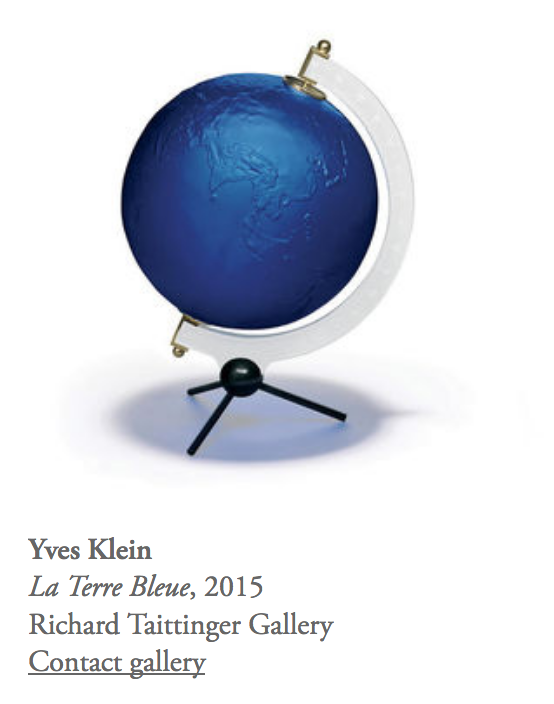 One of the most recent works is this globe. I got a kick out of how his blue engulfs the entire planet, rendering it into one large ocean. Environmental comment? Or perhaps a religious statement about the Noah and the flood?

Or maybe none of these. The year on this artwork is 2015. Rather perplexing since Klein died in 1962. It appears that his works continue to be manufactured as edition’ed multiples after his death.

He did, however, create a painted globe while he was alive in 1957. From the Yves Klein website, Blue Globe (RP 7), 1957 is posted with the following excerpt from “Yves Klein le Monochrome, il nuovo realismo del colore, Milan, Galleria Apollinaire, november 1961”

“In 1957, Yves Klein stated that the Earth was entirely blue. It was on that occasion that he created a Blue Relief globe (…). Four years later…cosmonaut Gagarin stated in April 1961 that the Earth is of a deep intense blue!!!”