The 1980s was home to many funky trends. Recipes and diets certainly had their unique direction. I looked at 40 different breakfast foods in Google Book’s Ngram Viewer to see which ones had peaks in various decades. Included are timeless breakfast foods like bagels, crepes, croissants, doughnuts, and french toast.

Popular cereals like Count Chocula, Honey Smacks, and Cookie Crisp are not included in this list. They only date back to the 50s, which doesn’t give enough of a historical impact. Looking at the trends of 40 breakfast foods, the 80s really stood out with five breakfast foods that had very defined peaks: English muffin, quiche, casserole, cottage cheese, and souffle. 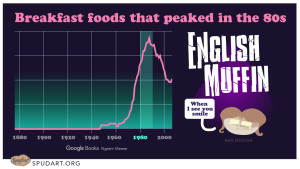 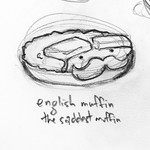 Ahh, the Thomas English muffin. Such a delight with the bread soaking up into the nooks and crannies. Originally I drew an English muffin with as an Englishman. A guy with a mustache and monocle. I love the thick butter patties for the thick eyebrows. The butter even melts a little bit to add to his sad state.

Since the Englishman character didn’t really have an 80s connection, I went with the band “Bad English” instead. 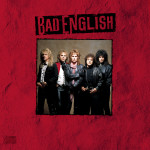 Finding the font to match their album covers was a bit tricky. I went through pages and pages of the dafont.com’s “distorted” category, and ultimately landed on Bison by Pseudoroom.

All the singers in Bad English have that really bad long 80s hair that is either feathered or a perm. Maybe I should have gone with the perm hair for the english muffin. Instead I went with the feathered hair. It doesn’t quite sit right on the muffin. But the next food, quiche, is going to be totally rocking! 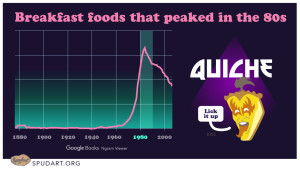 The quiche breakfast food, full of fluffy eggs and funny-sounding french name. By the way, quiche comes from the German Küche, meaning “cake”. So a quiche is a like an egg cake!

A few of the alternative gags for quiche:

When the 80s running theme started to build for all these food groups, quiche and kiss became an obvious reference to the band KISS. I’m rather surprised there are no Quiche-KISS band jokes on the internet. None that I could find, anyways. 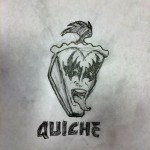 This has to be the best drawing of the five in this week’s comic. I was concerned about having to draw a cartoon quiche. How in the world does someone do that? But Gene Simmons’ long face matches the shape of a quiche slice rather nicely. From that basic triangle shape it was just adding the demon facepaint to the quiche, along with his long tongue hanging out.

KISS always freaked me out as a kid growing up in the 80s, and to this day, they still give me a bit of the creeps. But I couldn’t pass up on this Quiche-KISS connection. Plus, once I drew this, it just worked out sooo nicely.

The font used to match KISS’ font is “Die Nasty” by Typodermic Fonts. 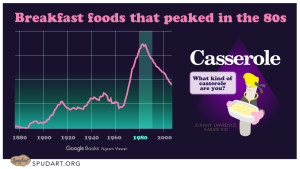 We all loved a good casserole in the 80s. You really don’t see casseroles as much anymore. Why is that? All these low-fat diets? 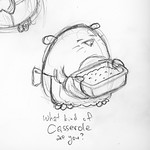 There was no way I was going to be able to animate or turn someone into a live casserole. The casserole is such a weird thing to draw—and especially to personify.

Given the tagline of “What kind of casserole are you?”, that was befitting to look up the various 80s bullies from movies. Some of the feathered blond-hair, letterman jacket-wearing bullies I considered were:

So many options! Interesting how they are all from 1984 to 1985. Just two years produced all these movies with famous bullies! 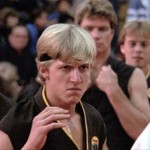 The best bully that would make for a great visual is Johnny Lawrence from “The Karate Kid” (fitting the year pattern from 1984). The black bandana and his karate outfit with yellow trim. I originally had Etym slated to hold the casserole in this drawing. But once I knew Johnny Lawrence was getting the nod, it had to be the Worm playing Johnny. Both tall and slender. The Worm is a great fit. Plus, the Worm is able to have more emotion in his face to show his pissed-off look.

The font used is the exact same font used in the Karate Kid posters, New Century Schoolbook. It’s a popular body font often used in childrens’s books. Dr. Suess books like “One Fish Two Fish Red Fish Blue Fish” use New Century Schoolbook. Another fun fact about this font is that the Supreme Court of the United States requires that briefs be typeset in Century family type.

A rejected tagline for the casserole: It Casseroles Right Off The Tongue. 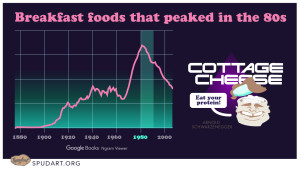 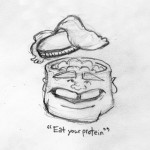 One of the 80s diet foods! This was a stretch with Arnold Schwarzenegger, because he never said, “Eat your protein.” But it sounds like this comes from the 80s for several reasons:

I tell ya, I searched high and low through Schwarzenegger quotes to try to connect some of his phrases to cottage cheese. And did you know that many of his movies are from the 90s? So those were out of the book.

His head as a jar of cottage cheese has a sort of decapitated feel to it, which kinda matches the sci-fi-ness from some of his movies. Probably a bit too much like Total Recall, a movie from 1990. But close enough for this purpose.

Searching for this font was pretty easy. It’s available on dafont, named Terminator Real NFI by Norfok Incredible Font Design. Gotta love how the letter A is slanted to be all bad-ass. 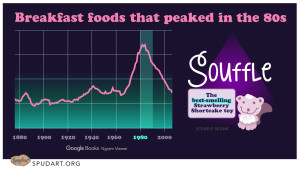 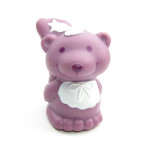 A quick google search for: souffle 80s toy will result in Strawberry Shortcake’s Souffle Skunk. Every Strawberry Shortcake toy had its own unique scent. I asked my wife if she remembered what Souffle Skunk smelled like, and she said “it had the best smell of all the toys. Scents of bakery and sweet, kinda like cupcakes.” To which I replied, “Excellent! I’m going to use this in the webcomic!”

An alternative tagline for Souffle is: Killing Me Souffle

The font to match Strawberry Shortcake was rather challenging to find, so I went one with one close enough, KG Strawberry Limeade by Kimberly Geswein. Kimberly has made 287 fonts on dafont—many of them very cute.

Overall, I’m quite pleased with the design of this comic. The 80s style is so much fun to work with. Funky colors. Cheesy graphics. And good memories.

Worm: There are FIVE breakfast foods that hit their peak in the 1980s.

English Muffin: Illustration of an english muffin that looks like a member of the 80s band Bad English. He is saying, "When I see you smile."

Quiche: Illustration of a slice of quiche that looks like a member of the 80s band KISS. He is saying, "Lick it up."

Casserole: Illustration of the Worm playing Johnny Lawrence holding a casserole. Caption: What kind of casserole are you?

At some point I’m going to do the breakfast foods that peaked in the 90s. Although I only have two foods for that decade so far.

Yay! Let me know if you need help.

Ahh, this particular comic didn’t really follow the norms of a webcomic that tells a narrative story. Each of the foods are separate little fun vignettes.

The point of this comic is just to show that there are five foods that happened to get mentioned in books more frequently in the 80s. I guess it helps to know what Google Books Ngram Viewer is. Give it a shot at https://books.google.com/ngrams

Yep, all those make sense. It’s interesting how none of them sustained their peak for very long. That speaks to how short of an attention span our culture has. Everyone gets so jacked up about a particular food, especially when it’s championed for certain dietary values. Then in a year or two it’s all of sudden pushed to the side so the latest, greatest solution comes along. And things just keep cycling in and out.

Eggs always seem to come and go. One minute they’re “horrible”, then the next they’re the “best” and so on. It’s so stupid and shows how truly our culture is just mindless sheep.

This might also speak to the publishing industry riding on waves of trends (or creating the trends and then abandoning them for new trends). Sarah pointed out that in the mid-to-late 1980s the no-fat diet came where you would eat more carbs, and no fat. Thus fat-heavy dishes like quiche, casserole, cottage cheese, and souffles died quickly.

Although I could have said, “breakfast foods that got killed in the 80s”. Heh, that would be funny. Then you’d have Schwarzenegger killing a jar of cottage cheese. The Karate Kid bully would be kicking the casserole.

What’s almost as interesting is the steady line you see in casserole and souffle before they started to build their ascent and eventual descent. I’m curious about foods that have just stayed the course and where on these charts they would stand. Cuz these charts aren’t just about when they peaked (though it’s super fun to see that), but it compare their climb and “de-climb” to established, consistent foods. It might prove the popularity of these foods extend beyond just their crazy peaks.

I always loved casseroles. Not so much for quiche.