Who is the best superhero in live-action movies? Will Superman take the prize for being in film the longest? Or perhaps the Batman with his record seven movies will take top honor.

If you’d like to see the raw data, here’s a link to my original Google spreadsheet. Otherwise, enjoy the stats below. 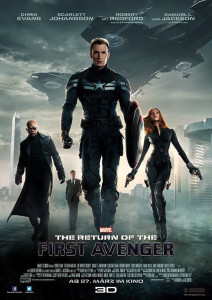 The top superhero is not Batman, nor Superman, not even Iron Man, but Captain America! His two movies Captain America: First Avenger (2011) and Winter Solider (2014) got a 79% and 89% rating, thus creating a 84% total score.

Good ol’ America. I’m rather surprised that Captain would rank at the top. He certainly doesn’t seem like the most popular superhero. But with movie critics, he is.

Hellboy comes in second with his 2004 flick getting 81% and 2008 getting 85%, creating a master 83%. Who knew that Ron Perlman of all people would be such a popular superhero!? 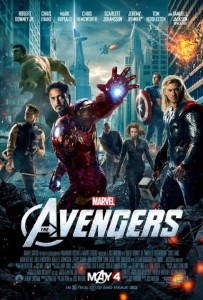 If we take the two Avengers movies by name only, we get an 83% total score, tying them for second place.

But that’s just for the two major Avengers movies. For the tie-breaker if we take ALL 13 of movies that the Avengers appeared in, that drops them to a 74% rating. Thus, the Avengers get third place.

Besides, the two Avengers movies are really a collection of many superheroes together. Hulk, Ironman, Captain America, Thor, Black Widow. You can’t quite say the there is one best superhero with this movie.

The snarky egotistical Tony Stark has a very strong showing with this first film getting 94%. The two following dragged it down a bit.

With Spider-Man, we enter the second tier of Superhero movies with an overall average rating well below 80%. 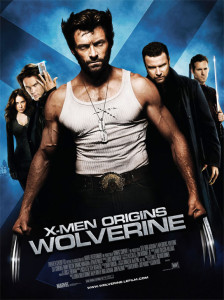 It’s too bad that the 38% Wolverine flick had “X-Men” in its title. Take that 38% out of the mix, and the X-Men movie collection jumps up into the first tier with 81%). But there’s a reason why I take the average of the scores, and not the median. Really bad films should ding a superhero brand, and ding it hard. We’ll see that happen with Batman and Superman further down the list.

Thor’s two movies were probably a bit too confusing for people as it mixed superheroes with Norse mythology. But hey, at 7th out of 16, Thor still is in the top half of superheroes. If they ever come out with a third Thor movie, I have a feeling it would tank hard.

Thank you, SirYak of reddit for correcting me when I called it Greek mythology.
Also, thanks to BearsAreSquares of reddit for pointing out that Thor III might be really awesome with the Hulk in it. You have given me new hope for the third Thor movie. 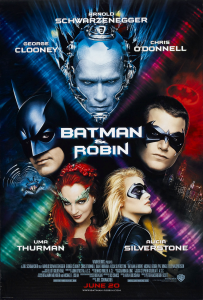 Oooooh. Batman & Robin. OUCH. 11%. Take that one movie out, and Batman’s score jumps ten percentage points to 77%. But we gotta include the really bad movies. Batman & Robin is part of Batman lore.

Ohhh Superman. You are so generic. Sorry. If you could only be more like Captain America. But wait, you tried that in 1987 where you flied around with an American flag and that got you 12%.

Judge Dredd having TWO movies cracks me up. But hey, it gets him onto this list. Any superhero with just one movie has nothing to average, so that superhero doesn’t make it onto the list. But Judge Dredd got a remake in 2012. It baffles the mind that anyone would want to take the

Yes, Transformers are superheros. They are aliens from another planet. Superman, Thor, Hellboy—all are from other worlds and have superpowers. However, Michael Bay cannot get good movie ratings, so Transformers sits in 12th place.

Including the original animated Transformers movie of 1986 was tempting, but that opens pandora’s box for all the plethora of other animated versions of superhero movies. Besides, the 1986 movie only got a 53% (and that is my favorite movie of all time). One of these days, I should take the “audience score” from rotten tomatoes and see how the movies do. 1986 Transformers got 88%.

You know we are getting to the bottom of the barrel when we hit Teenage Mutant Ninja Turtles. If someone can’t take Transformers seriously, I don’t know how we can do that with TMNT. I love the cartoon series—but putting these guys into real-life form—ick.

There are two Punisher movies? I missed out on these.

(The 1989 Punisher movie was originally included, but I have removed it. Thank you to HotBigBagofWTF of reddit for pointing out that it was never released theatrically in the US)

In the second to last place, it’s nice to see that we don’t just have movies that are 20 years old.

Ghost Rider. Seems like it’s a cool comic book. But for a movie? I haven’t seen it, but I get the impression that this is the quality of a bad 80s gang movie. Movies like Ghost Rider makes me wish there were more superhero movies in the 80s—just so we can see how bad they could be.

This week I’m trying a new drawing style. My previous style would have me tracing the pencil sketches in Illustrator. Each shape would be hand-drawn using the pen tool. It offers me great flexibility, because every part is adjustable. If i want to turn a character’s arm, I just select the arm shape and rotate it. Since the drawings are vector shapes, they are scalable to any size. 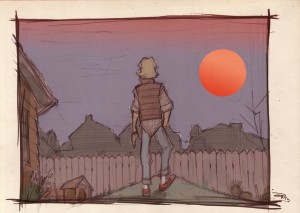 However, they end up looking rather flat. At some point, I would like to try the gradient mesh tool a bit more to add advanced shading. But right now I’m just trying to produce a webcomic and get it out in a reasonable amount of time.

While doing research for superhero artwork, I came across some artwork on deviantart by DenisM79. I love seeing the loose pencil lines, along with the loose color behind the pencils.

Using this as inspiration, I tried a new illustration technique in Photoshop where I color behind the pencil sketch lines. The pencil sketch is the top layer with its ink set to multiply.

Not only was I hoping to capture the same feeling of DenisM79’s work, but I was also hoping this might be a faster technique of coloring the artwork. It was pretty good. 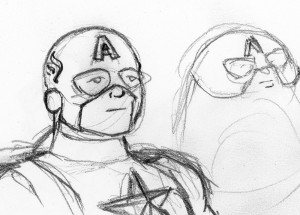 Etym in the batman outfit was really cute. I tried putting him as Captain America, but that just didn’t work. The Worm as Superman might actually be my favorite over Etym as Batman. The Worm is pretty tricky, because he has no arms or legs. But Superman’s outfit is iconic enough where it can work without arms or legs. The Superman S seal carries the outfit, along with the Superman cape. 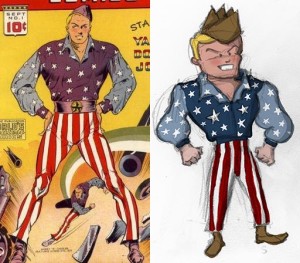 For the end of the strip, I needed some other World War II comic book characters. There are a plenty! Uncle Sam, Captain Victory, the Flag, Yankee Doodle Jones, Yankee Eagle, the Star-Spangled Kid and Stripesy, Super-American, Captain Courageous, the American Eagle, the Spirit of 76, American Crusader, Captain Fearless, Flag-Man, Minute-Man, the Liberator, and Mr. America. And those are just the good guys.

Yankee Doodle Jones’ outfit is just something to behold! His star-covered shirt reminds me of a wonderful shirt I owned during high school in the early 90s. Random white stars covering n extra-large shirt with a slight blueish-purple tinge.

For the World War II villains, Captain Nazi, the Red Skull, Baron Gestapo, Captain Nippon, Captain Swastika, the Claw, and Adolf Hitler. Baron Gestapo is an over-the-top villain. Not only does he have a huge swastika on his chest, but that swastika is on fire! It looks like the flames might be part of the design. But who knows, maybe those are actual flames coming out of the swastika! As if that wasn’t enough, the Baron also has a monocle. Monocles were very popular for German generals. Dietrich von Saucken, Walter Model, Von Saucken, Von Seeckt, Von Frisch, Hugo Sperrle, and Von Reichenau. 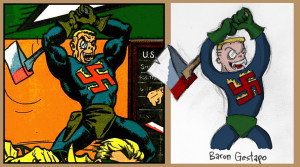 The monocle wasn’t enough for Baron Gestapo, let’s also give him some vampire teeth. And his weapon of choice? A huge freakin axe. I was really quite scared to draw Baron Gestapo.

Giving him an average of 45.3%.
That would put Blade in 11th place, just after Superman, and before Judge Dredd.

[…] a similar rankings note, Matt Maldre of Spudart has a blog post where he ranks various superhero/adventure comic book character film franchises by their Rotten […]