I was recently asked who is a favorite artist of mine. I really haven’t evaluated that in a couple years in the framework of favorite. The true inspiration is the artists that are around me. They influence and inspire me to get going and producing work. However, to list actual names is tricky, because I don’t want to accidentally leave anyone off the list. For this exercise I’m not going to include anybody I know.

Here are 14 artists with work online (that I don’t personally know) that have inspired me this year: 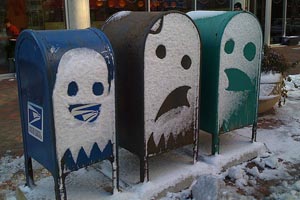 The Mailbox snow ghosts have been inspiring me lately to draw on windows. 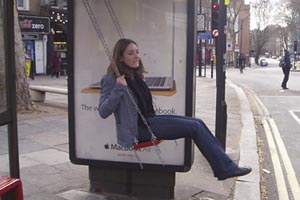 This is a film about hijacking a bus stop. 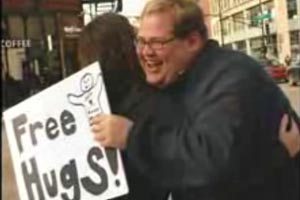 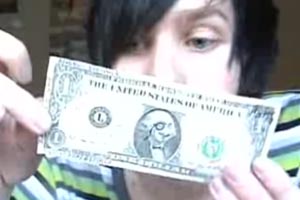 Friends sending each other the same dollar bill, and videotaping themselves opening the letters on YouTube. This inspired me to open a letter from a spudart fan on YouTube. 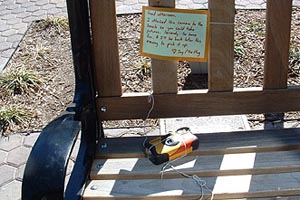 A disposable camera tied to a bench in Atlanta with a sign encouraging people to take photos. I’ve been meaning to do this project. 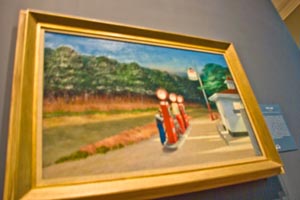 The ol’ standby. The Art Institute recently had a show of his paintings up, and it reinvigorated my love for his work. In particular I really liked his 1940 painting “Gas.” I must have stared at this for 20 minutes. The above photo is me trying to sneak off a shot. Oh, and side-trivia. I was the very very last person to visit this exhibit in Chicago. I went on the last day, and security had to ask me repeatedly to leave the exhibit. There was one visitor behind me, and I stalled a bit, waiting for her to exit through the exit before me, so I could be the very last one. 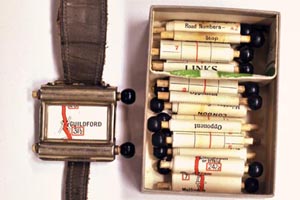 A scroll watch. Too cool. I want one with bible verses. I’ve been thinking of leaving bible verses in mini scrolls like this on the train. 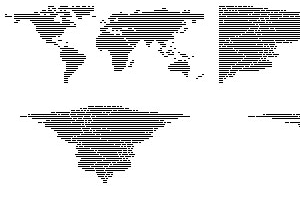 Anytime someone plays around with maps, I love it. Here’s a completely new way of looking at the world if you took a map and slide everything to the left side–a left justified world! It reminds me of the 2005 piece I did “Aligning Countries. Since then I’ve wanted to cut out all the countries on a world map into wooden pieces and then stack them. 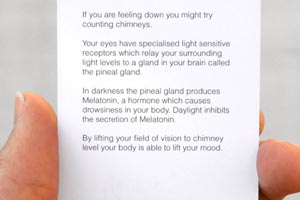 Business cards with a phrase printed, “By lifting your field of vision to chimney level, your body is able to lift your mood.” Anything to lift someone’s day is truly an inspiration. 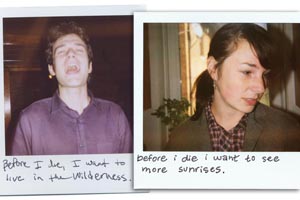 #1 This is a great question to ask people. How would you finish this question?: Before I die I want to __________. Really forces people to access what they are doing on this planet in this life.

#2 This project takes advantage of the poloroid medium. Instead of just having someone write their idea on a piece of paper, write it right on this photo of you that we JUST MADE!

#3 Having the photo of the person next to his/her response really makes this project come alive. Imagine if there was no photo. It’s an ok project. But with the photos, it brings this project to life.

#4 Plus, you can see the handwriting of the person, bringing out more personality.

If you visit this site, make sure you scroll to the RIGHT to see more polaroids

11. its not that far really 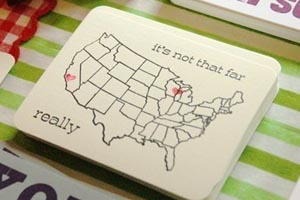 #1 This is a postcard. I love postcards. We all need to send more postcards–not just on vacations, but just in general.

#2 The idea behind this card is really sweet.

#3 It’s completely customizable for whomever buys this postcard.

#4 It brings people together. Closer. 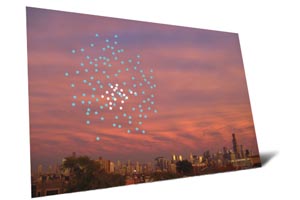 Oh wow. I totally had this idea years ago. People subscribe and get an art print once a month. It’s cool to see how someone took this idea and made it real. I’m gonna do this too… someday. 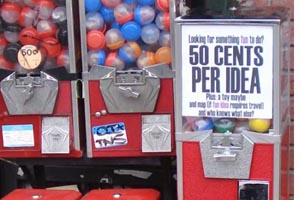 I love what the sign says, “Looking for something fun to do? 50 CENTS PER IDEA. Plus: a toy maybe and map of fun idea requires travel. And who knows what else? Reasons why this is so cool:

#1 Often, people are at amiss for what to do. This will give suggetions.

#2 Often, people get into a rut and do the same thing over and over. Suggestions here!

#3 If someone invests the 50 cents into the machine, they are already open to the suggestion from the machine. Therefore, they are more likely to actually do it.

#4 Every bubble has a quarter in it, so the user gets half their investment back already. People would love getting that quarter. I guarantee it. Even though they initially spent two quarters, just getting one quarter back in addition to the idea/toy/map, will give the person a pleasant surprise and start their experience with this artwork on a good note. 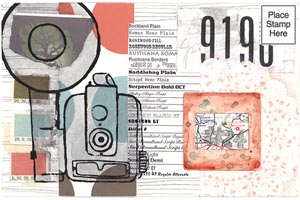 “It’s a project that allows anyone to exchange postcards (real ones, not electronic) from random places in the world.” Heh. I signed up, but I still have to send some cards! I even have foreign postcard postage.

Many of the users on this site ask for you to write a little bit about your town. I’d love to make postcards of Chicago celebrating Obama winning the 2008 Presidential election. It would also be great to make postcards that show Chicago’s bid for the 2016 Olympics. Both things have great world appeal, yet touch on Chicago’s greatness.

What a nice tribute to these artists! Those mailbox ghosts are cute! When I saw #11 I immediately thought of postcrossing. #5 rules! I love that idea!

ha! Yeah, when I was writing #11 with the “it’s really not that far” postcard, I was totally thinking of postcrossing. In fact, #11 reminded me to including postcrossing on the list (that’s the reason why postcrossing is at the bottom at #14–last minute addition). #5 “Stranger Photos have Happened” does rule! The guy who did that project also does a bunch of other interesting things. You can see them at his website: http://www.theplug.net In particular I enjoyed some of these nuggets on his site: Idle looks. If I had a car I would do this one. 2009 Plug Calendar. It’s entertaining enough to hang up. Come on baby, like my flier: Fun project. I was gonna post a sign on the tree outside my apartment asking people what it was. But then one day my dad just happened to tell me (without me asking) that it’s a catapula tree. I like signs in public. They are fun. As I’m writing these things I like on theplug.net, I wish he had comments on his site. That would be nice. I’m trying to find the one where he tries to punch a hole in a pumpkin with his fist. I just looked through issues 34-37 and haven’t found it yet.

tom: it’s so funny how you find my delicious.com bookmarks on IM. It must be a PC thing with the yahoo messenger where they sync up my most current delicious bookmark with yahoo messenger. I like how you see my bookmarks via that messenger. It’s neat. It just always surprises me. lol. I can’t wait to print out the 2009 Plug Calendar at work. sarah: i like your picks. 🙂

well you ought to! since they’re originally YOUR picks haha

Vending machine art has great potential. I always wanted to open a gallery that is full of specially rigged vending machines that dispense 8×10 paintings for between $25-75. No attendant would be necessary at the gallery. I’ve seen vending machines at Macy’s that dispenses electronics (ipods, watches, etc.) I suppose there would be instances where the machine would jam. I haven’t quite figured that out yet.

Moose, remember Matthew Shutz’s Toady the Kid comic books inside a newspaper box? That was neat. Only thing with newspaper boxes is that someone can grab the entire stash of artwork that is stacked up inside.

Come tell us what you want to do before you die: http://www.beforeidieiwantto.org click on the “submit” button. Hope to see your photo in our PO box!