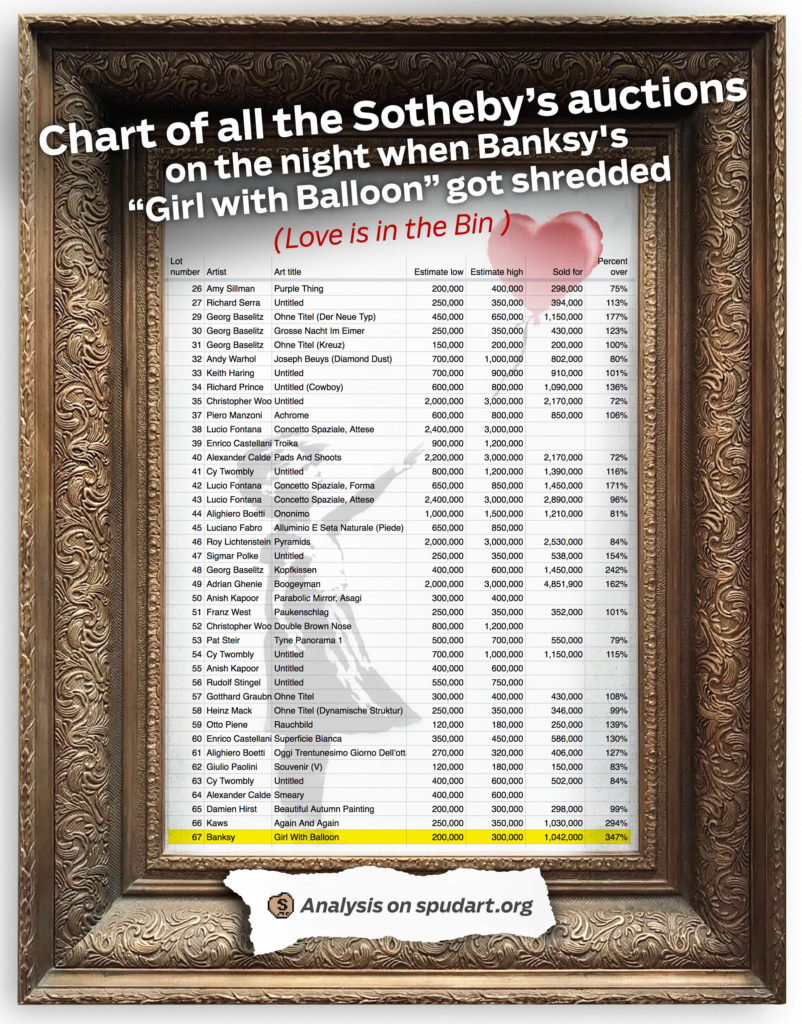 A Banksy painting was shredded immediately after its auction ended. Apparently, the auction house Sotheby’s didn’t know this was going to happen—or did they?

Blogger Jason Bailey wrote a detailed analysis behind the Banksy shredder: Myth Busting Banksy. Was it a legit prank or complicit staging?

This last point is an interesting one. The artwork just so happened to be the last one in the auction that night. Bailey explains why this is significant:

There were 67 lots in this auction, and the Banksy piece was the very last piece auctioned off. Had the Banksy piece been auctioned, say, 10th or 30th, the distraction from the beeper and the self-destructing work would certainly have interrupted the sales of many of the many other works sold that day. Sotheby’s reputation, their ROI, as well as the ROI for consigners, required that the Banksy piece be sold last.

This particular auction happened on October 5, 2018 at 7:00pm BST in London, named “Contemporary Art Evening Auction“. It appears to have 40 lots, not 67. The numbering of the lots starts with #26. I don’t think lots #1-25 exist, along with lot #28. Or least Sotheby’s doesn’t list these lots on their site.

We’ll look at lots 26 to 67 sold on the night of the Banksy shredder auction.

Hopefully this table doesn’t get all messed up. If you can’t view the table, here’s a high-res visual graphic of the auctions. Analysis is below this table.

Analysis of the Sotheby’s auctions on the night when Banksy’s “Girl with Balloon” got shredded.

You’ll see the Banksy lot is at the very bottom. Lot #67. It sold WAY over the estimate 3.5 times as much! In fact, it exceeded the estimate more than any other lot in the auction that night.

How does the Banksy lot compare with the rest of the lots?

Artists in the auction

A breakdown of the artists and how many lots they had in this eventing auction:

Banksy had only one piece in this show, so maybe Sotheby’s stuck him at the end. It’s his only piece, let’s make it grand! But many other artists had just one piece too.

The auctions that night were listed as the following:

Oddly enough, the auction description for this Banksy categorizes it as acrylic on canvas. Hmmm. Isn’t this paper?

I’m not sure what to make of this. If you are selling something for 200,000 to 300,000 pounds; wouldn’t you make sure you get the medium correct? I certainly would not want to buy something thinking it was painting on canvas, but then it’s painted on paper.

UPDATE ONE DAY LATER:
Sotheby’s released a higher-resolution image of the shredded artwork. If you look closely at the black areas of the painting, you’ll see that it does indeed look like canvas! I am wrong about this being shredded paper.

Sotheby’s listing also said, “mounted on board”. Hmmm. Clearly this artwork was not mounted on a board. It was a loose sheet of canvas. I guess 200,000 to 300,000 pounds is considered not enough to be 100% accurate, so the auction house can be looser with the description.

Sotheby’s has this category called “Object/Type” and the following the quantity of each that night:

Banksy’s artwork here is considered to be “Figurative”. Eight of those pieces. A whopping 31 are abstract. I suppose having all those abstract works are the nature of a “Contemporary Art Evening Auction“.

Of the 32 auctions that sold:

The median percentage over the high estimate is 107%.

The painting before Banksy’s in the auction

What was the painting sold right before the Banksy? That might be curious. 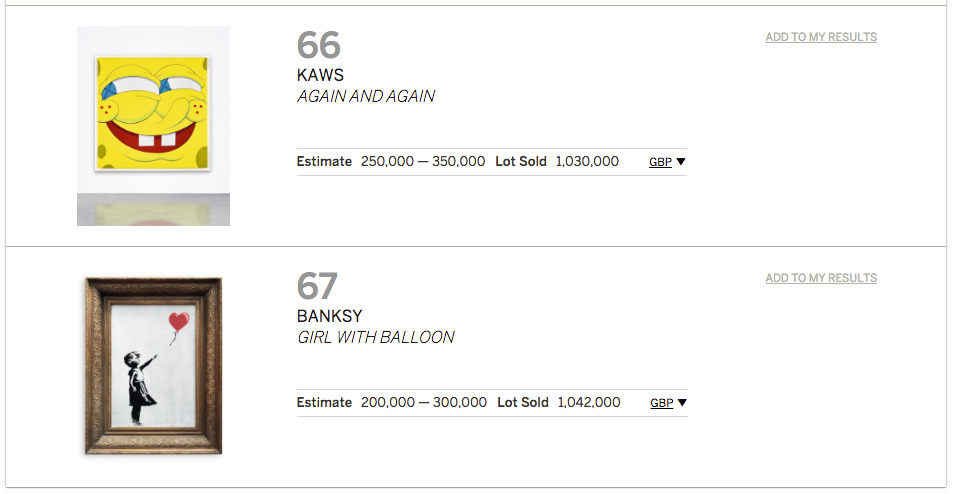 It’s a giant image of Spongebob Squarepants! Wow. What a bold image. At first thought, it seems to make sense. Like Banksy, KAWS is also a graffiti artist. Putting him before Banksy is logical. However, look at the painting in the context of a gallery: 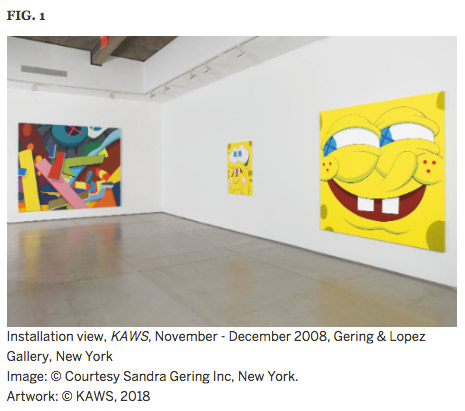 And the title, “Again and Again.” As if it’s saying Banksy is at his tricks, again and again.

You know what’s also interesting? That painting before the Banksy sold for 294% of its high estimate. Would the buyer maybe know that this Spongebob painting was a tipoff to what would become one of the world’s greatest art pranks ever?

Sotheby’s possibly gave a great foreshadowing tipoff. The Spongebob painting auctioned right before Banksy’s painting, hinted that a prank was about to happen.

Look at the auctioneer after he hit his gavel (youtube). He looked over at the painting/print to see it shred.

I’m kinda reading into it, but it seems like he’s looking at the painting waiting, “and now, it will shred”. It was acted out, so people would turn and look.

Granted, auctioneers do have perform up in front of the audience for every auction. That’s kinda the job of an auctioneer.

UPDATE ONE WEEK LATER:
Banksy released a new video. It includes more of the auctioneer’s body language. That little hop and turn to the painting was just his glee of the painting selling for so much. A few more seconds actually passed after his reaction until the painting got shredded. After viewing Banksy’s video, I’m pretty convinced that Sotheby’s didn’t know that the prank will happen—or at least, the auctioneer didn’t know.

Banksy goes ahead and renames the artwork after it shreds. “Love is in the Bin”. On the surface this name furthers the idea that the art market ruins the nature of art by commoditizing it. The art market takes love, emotion, and art; and throws it into the garbage.

However, a deeper analysis into the process of renaming the artwork reveals the contrary. Banksy destroyed the artwork. He shredded the piece to say, “Screw you art world! Don’t sell my art! I’m going to make it self-destruct!”

But now Banksy renames the piece. Sooooo, it’s still art? It’s not destroyed? Giving the artwork a new name says the artwork lives on. The artwork still has value! The value is not gone. The artwork still exists, and is still valuable. In fact, many people say the value has now doubled. Which is pretty incredible considering that the artwork sold for 3.5x the estimated price. And now on top of the 3.5x winning bid, the artwork is worth DOUBLE? That’s SEVEN times the original high estimate. Absolutely incredible. Genius.

Does Banksy see this artwork as more valuable? The “anti-establishment” version of Banksy would say this artwork has no value.

But the cooperative version of Banksy would say this artwork is now worth more. In fact, let’s give it a new name to match it’s new identity. And that’s what Banksy did. He gave the artwork a new name.

Even Sotheby’s is going along with this line. The artwork wasn’t destroyed. It was CREATED.

Alex Bancik, European Head of Contemporary Art, Sotheby’s, had this to say on Instagram: 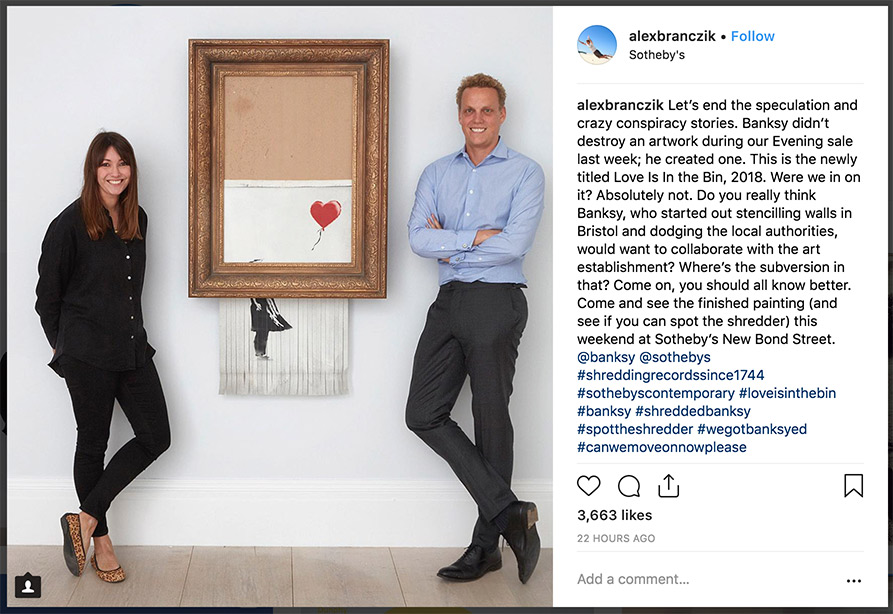 Let’s end the speculation and crazy conspiracy stories. Banksy didn’t destroy an artwork during our Evening sale last week; he created one. This is the newly titled Love Is In the Bin, 2018. Were we in on it? Absolutely not. Do you really think Banksy, who spent his youth stencilling walls in Bristol and dodging the local authorities, would want to collaborate with the art establishment? Where’s the subversion in that? Come on, you should all know better. Come and see the finished painting (and see if you can spot the shredder) this weekend at Sotheby’s New Bond Street.

Alex Bancik makes a great point. Most likely, they were not in on the prank. However, why would Sotheby’s want to end any speculation? Doesn’t the speculation fuel the value of this artwork?

What do you take away from this?

The Banksy sold for very well over the estimate. This seems to tip in the favor of Sotheby’s and possible one of the bidders knowing about the upcoming prank.

Or was this piece just really desirable on its own? Maybe Sotheby’s knew that this Banksy had the potential to sell for a lot more than its estimate, so they stuck it at the end of the auction.

I really don’t know how Sotheby’s orders their auctions. Do they put lots at the end that they think will sell for well over the estimate? Or did Sotheby’s know the prank will happen? And perhaps maybe one of the bidders had insight too? 3.5x the value. That’s kinda crazy, right?

I’m fine if Sothebys knew about it. At this point, Banksy is not anti-establishment. The auction house sells his work, he shreds the work. It’s funny. And if Sotheby’s didn’t know about it, then that’s cool too.

What do you think?